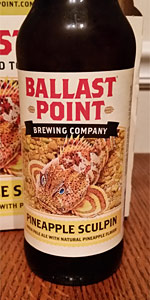 Notes: Our Pineapple Sculpin IPA came from one of many small-batch cask experiments to enhance the flavor of our signature IPA. With so many tropical hop notes in Sculpin, how could we not try adding some sweet, juicy pineapple? The combination of fruity flavors and hop intensity definitely packs a punch.
View: More Beers | Place Reviews
Recent ratings and reviews. | Log in to view more ratings + sorting options.
4.24 by DarrellK from Florida on Dec 25, 2021

355 ml bottle, Cardinal Pub & Bar, Stavanger. ABV is 7.0%. Deep golden colour, moderate white head. Aroma of pineapple and fruity hops, some pine too. The flavour has also notes of pineapple, but this is still a well hopped IPA, and not pure pineapple juice. Very drinkable.

April 25th, 2016 - Ballast Point's pineapple flavored Sculpin is absolutely a downgrade from the original formula, but I do concede that the nose brings me back to the Tiki Oasis event hosted here in San Diego - weed and pineapple, with some tiki punch, and, oddly some diaper. I wouldn't put that past Tiki Oasis circa 2am. The flavor is a downer though, tasting like a raw, underripe pineapple.

A- Pours a hazy dark golden/amber color with orange hues when held against a light....I definitely feel that the haziness is a lot more robust than several of the previous reviews would suggest...is it just mine I wonder? Shows off a nice eggshell colored head that is dense and creamy looking, and has excellent retention....starts off at around three fingers in thickness, before settling to an undisturbed froth over top the brew. Also shows excellent lacing, with thick rings sticking to the inside of my beer glass....almost as thick as the head left behind after it settled! I can see faint columns of carbonation slowly rising to the top in lumbering fashion. Overall a very nice looking IPA!

S- This doesn't have the overbearing hop presence that I thought it would, but rather there is a very distinct sweet tropical pineapple aroma that really balances out the bitterness of the hop cones. Background smells of citrus fruits, malt robustness, extra dark chocolate with candied orange/pineapple bits, pine sap and really thats about it from these nostrils! The finish is sweet/sour and lingering.

T- Flavors follow suit to the aromas quite well, with the only big change being in the hops, which is now much more prolific, yet it is cut rather well by the citrus/tropical acidity present. Outside of this, the malt becomes more rounded and is of deep dark toffee/nutty sweetness, with very subtle cream and yeast. Finish is of piney resin astringency, oily hop leaf and a lingering fruitiness that helps round everything out. I don't mind the flavors!

M/O- Light to medium bodied, with modestly aggressive carbonation, I think this feels about right on the palate for my liking.....there's enough flavor to go around without it being too hop forward, yet is cleansing all the same. The oily hops and fruitiness make the alcohol take a back seat, even at 7% it doesn't rear its head really. I know I'm on the smaller side of the IPA spectrum in terms of who likes what, but, I don't mind this really, and would probably have it again! I just wouldn't want to be having more than a bottle in a sitting is all.....nice beer though!

As Edbeerd might say, "Where's the pineapple?!" Although it (thankfully) tasted better than it smelled, I can't say I want another.

Poured from a can into a pint glass. Pours yellow orange with a fluffy white head. Smells of tropical fruit and citrus hops. Tastes of citrus and earthy hops with passion fruit and slight banana. Beer is light bodied and very easy drinking, good carbonation. Overall, a very good beer.