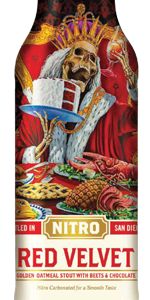 Notes: This stout takes the cake.

Our Red Velvet oatmeal stout is a mind-bending beer. Like the cake that inspired it, the deep red color comes from beets, which add a rich, earthy character that complements the chocolate flavor and aroma. The foamy head of the nitro pour is our “icing”, adding a creamy smoothness to the mouthfeel. But this liquid dessert still finishes like a beer – not sweet, but just as satisfying.

If this was Japan in the 1930's, the company CEO might be wise to force the brand's marketing team to commit hari kari. To call this red velvet cake anything is a complete misnomer despite the color of the beer ... maroon with lighter foam head.

If you read nothing else in this review, know that the beer's color is derived from beet juice ... and the beer unsurprisingly tastes like beets. Most folks don't eat beets for the taste ... why anyone would want to make beet tasting beer solely to give it the color of red velvet cake with none of the taste is beyond me.

When I saw this novelty in the store, I knew I had to try it. I love creative flavored beers and I love red velvet cake. As I drove home from my local liquor store, I wondered how the brewers would get the taste duplicated ... obviously chocolate for the cake portion? (nope ...) the maybe a creamy marshmallow note for the frosting? (nope ...) there is cream cheese in the frosting, so maybe a sour note to offset the chocolatey sweetness? (nope ...)

Spoiler alert, you are left with a beet flavored beer that looks like cherry soda and tastes like carrots and wood chips left to ferment in a cup of water.

If this was marketed as 'vegetable ale' I might respect their creativity slash lunacy enough to give a 3 rating. But the fact this is marketed as the most delicious dessert ever created in red velvet cake and in actuality tastes more like sudsy soup than beer gets it below 2 all day.

A reddish orange color, with a little haze, a little funk, little carbonation, and almost no yellow wish head.

It smells of cherries, and a bit like berries. No beets to me.
It taste bitter, no sweetness, I get vanilla, and a bit of cherry.

Light body with very little carbonation. Not smooth at all!

I think I got a really old bottle as this was packaged on January 18, 2018. I got this in Sacramento and I am drinking it here today on November 25, 2018. Really not loving in this brew from an otherwise great brewery.

With this being a stout, I wasn't sure I'd like it, since I haven't had a stout that I enjoyed. I love red velvet cake so I thought I'd give it a try. Straight from bottle, into nonic pint glass. Nice color, nice steady head. Smelled a good amount of beets.
Didn't taste like red velvet cake, but very smooth. If other oatmeal stouts are like this, I may have found a new style I like.
Overall, pretty good beer. Very easy to drink.

Red velvet cakes are delightful, so I was compelled to partake in this beer. I observed that there is a bottled on date on the side of the label. There is interesting artwork on the label by the way. For a nitro charged beer it does not pour out like one, but oh well looks aren't everything right. Wow! this actually does taste similar to some red velvet cake. There is bitter sourness to the taste that is contrasting with the sweet red velvet cake aspect. I don't think beets & chocolate are a mix up folks. I do a agree with this beer being flat & watery. This beer does have a few flaws so I guess Ballast Point just got half way there with this beer, that's okay for a first try out. I would love to try a 2nd batch of this beer that has worked out these tweaks to make this beer come out better & more balanced because I can see that there is great potential in the Red Velvet (Nitro). Cheers! C

See, I want to love this brewery. All these themed beers are really great ideas, and the execution is really quite impressive, but the thing about Ballast Point is that all of their beers feel so restrained and taste so bland to me.

L: The bottle art is vivid and quite pleasing to look at, and I see why they suggest such an aggressive pour. It does produce a lovely array of fall colors in the body as the minimal head rises, leaving a completely transparent red/amber body with a little sediment floating around. Carbonation in this is only a little better than a BA Stout, but the head retention is pretty decent. Not bad lacing either.

S: It actually smells incredibly similar to a red velvet cake. Upon sticking my nose in the pint glass, I am greeted with a heavy, but not overpowering vanilla presence balanced against an equally potent milk chocolate. Within two seconds, the sweetness mostly dissipates, revealing a dry oats aroma just before faint sweet/tart steamed beets join the mix. The chocolate has the most stamina.

T: It does not taste at all like cake. Disappointingly, it really does taste like a thin and watery oatmeal stout with beets and milk chocolate. Almost no roast to speak of at all. The malt is fresh and clean, but plain and boring. Zero hop presence.

F: Just awful. Flat, thin, and watery right out of the bottle. Don't do the hard pour thing. You'll just lose most of the already sparse carbonation. Or just do it with one bottle, if you want to watch the foam show.

O: I usually love oatmeal stouts, so I thought this had a chance, but honestly, this is one of BP's wider misses. Even the Moscow Mule Ale was better than this. D-

L - Hazy pinkish, reddish, orange with some clarity around the edges with a medium off-white head that sticks around and leaves some lacing behind. The fact that this is a stout and is this color is pretty amusing though.
S - Slight notes of chocolate, oats, barely, and some earth - the smell is pretty faint however.
T - Pretty much follows the nose with notes of chocolate, oats, and barely followed by notes of earth - probably from the beets. Somewhat of a mineraly, watery, finish. Sweet, but definitely, not getting the red velvet vibes I was hoping for.
F - Not really creamy for a nitro stout with only a very slight hint of creaminess - light to medium bodied with a moderate amount of carbonation. Crisp and somewhat thin for a stout - not very stout like at all. I'll admit, I probably did not pour this one quite as vigorously as I should have to get the most out of the nitro...
O - As far as stouts go, this is just ok. It's good, but not great, and definitely not amazing. Honestly, if it weren't for the gimmicky marketing, experimental style, and awesome artwork, I probably wouldn't have enjoyed this beer half as much as I did. Overall, a nice try from Ballast Point, and worth a try to anyone looking to try something new and different.

Turns out I liked the idea of this beer more than I actually liked the taste of it. It was definitely sweeter than I was hoping for, but creative and fun to try something new.

A pleasant surprise. Outside of the creamy nitro head, it's not much to look at and will have you thinking "shitty raspberry flavored malt liquor". Smells pretty fantastic, though; some chocolate and lots of sweet, earthy beets. The taste follows, with an incredibly smooth finish. Maybe a little thin, if I had to nitpick, but this is a good beer. Killer artwork on the label too. Looks like something out of a drug-fucked late 70s Dungeon Master's Guide.