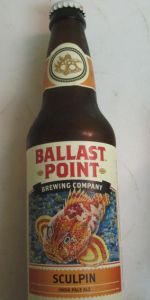 Pours a clear golden color with a small head and moderate lacing.

Smells and tastes of malt and and peppery hops with some tart citrus.

This is a classic west coast IPA

Dec 13, 2021
Rated: 4 by TwilightBeerCareer from Illinois

4.41/5  rDev +0.7%
look: 4 | smell: 4.25 | taste: 4.5 | feel: 4.5 | overall: 4.5
Just a bit of haze infiltrating the amber body along with a medium size white head and good lacing. After inhaling everything hoppy, from citrus to pine and everything in between, there wasn't much room for the malts to make a statement. Thought they might take a step forward in the taste, but nyet, still awash in all the hop pleasures. Bold and bitter right thru to the aftertaste. Full-to-bodied well carbonated mouthfeel that is so welcome after weeks of malty marzens and festbiers. Could easily pass for a DIPA.
Sep 30, 2021
Rated: 3.93 by KT3418 from Colorado

4.44/5  rDev +1.4%
look: 4.5 | smell: 4.25 | taste: 4.5 | feel: 4.5 | overall: 4.5
12oz bottles and on tap into a 16oz nonic pint glass.
L: Pours a slightly cloudy caramel amber with a 1.5" off-white rocky head with very good retention. It is well carbonated right to the end of the pint. Some skeletal lacing and banding.
S: Apricot, peach, light pineapple, pine, raisins, light sweet bread.
T: Earthy apricot, sweet ripe tangerine, lemon peel, mango, juicy pine and toasted grains. It is fairly bitter with pine resin lingering throughout the finish and is moderately sweet and resinous.
F: It has a firm, lightly sticky medium-bodied mouthfeel that is smooth with a long finish. It is not jarring with hops yet they are bold and balanced.
O: I first tried this beer in 2008. A bottle pour produces a bit more foam than does a tap pour. It is an excellent full flavored hop-forward West Coast IPA. It's well balanced hop configuration flavors remind me of the children's breakfast cereal "Fruit Loops". It is very excellent in it's style.

This is one of those beers that I had for the first time very early on in my craft journey but never reviewed. From what I remember of my 21st, I had a lot of this and the grapefruit variant, and kinda just stopped going back to them after that. Not for any particular reason, but I started branching out since I had the options. So when I saw this and the grapefruit one lying around recently, I just had to pick them up, even though they were older cans they deserve a proper review

Despite the age on the can, this is still in your face hoppy and fresh, which is really what drew me to this beer more than anything when I first had it. I'm picking up on aromas of earthy hops, pithy grapefruit, coriander, lemon rind, biscuity malt, and light caramel

As I said, I recall the aroma being the high point, and the taste lagging a bit behind, but in this case I think it's the age showing a bit. On the front end of the sip I'm tasting pine sap, bready malt, white pepper, pithy grapefruit, and peach. The swallow brings notes of orange zest, peppery hops, caramel malt, and toasted grain

A light medium body pairs with mild carbonation, resulting in a slick yet firm beer. Finishes off dry and feels much lighter than the 7% it actually is

This beer is an institution for a reason. An absolute classic which holds up today, but I can only imagine what it was like for people to experience this one in the early days. A treasure of a beer that I think I'll have to come back to more often

4.89/5  rDev +11.6%
look: 5 | smell: 4.75 | taste: 5 | feel: 4.5 | overall: 5
This beer, is top tier IPA. It is very bitter, but with character and makes this one of a kind. Meant To wow all those who are tired of the same hazies, same ol imperials, whatever. This beer is unique. Look is obviously excellent, bright and opaque. As for feel, well it goes down with ease, with the feel of a superior beer. Carbonation, nuetrality, and taste that's what you need. If warm, it may not feel so great, due to it's strong flavor.

This beer is worth more than market. It really should be priced a bit more than it's competition, but it's not. So it's a great deal to boot.

Now, the alcohol. This beer hits you. It is totally reliable to make you extra drunk and fast. Be wary and believe me and my fellow Sculpin lovers. This is also added value. Ballast Point will go down in history for this legendary beer. My only complaint may be consistency. It's very strong IPA, so a bit more likely to get an off-batch once in a blue moon