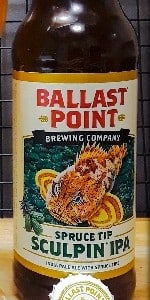 Notes: Our flagship Sculpin IPA shows its complexity in this limited Spruce Tip edition. For a different twist on our traditional IPA, we added fresh Oregon spruce tips that contribute a unique piney, citrus and woody character on the nose. Plus, their flavor notes of red berry, lemon and wine grapes perfectly complement our hop profile. A great brew for the holidays and well beyond, this is a standout in a forest of IPAs.
View: More Beers | Place Reviews
Recent ratings and reviews. | Log in to view more ratings + sorting options.
3.44 by BigMike from Pennsylvania on Dec 04, 2020
3.75 by TallGuyCM from California on Jun 16, 2020
4.25 by Shawnspl from Rhode Island on Dec 26, 2019
4.06 by nodnaut on Dec 03, 2019

Aroma: Strong aromas of orange marmalade and pine. There is some tropical and black tea too. (3.75)

Flavor: Flavors initially of dank tropical and orange marmalade, but this is brief. It quickly evolves into a not-bitter pine and spruce flavor, and then it finishes with a broad berry flavor including raspberry and blueberry.

Feel: Body is medium. Carbonation is medium. Finishes relatively clean given the lack of bitterness. Some detectable alcohol at 7%

Overall: A pretty good IPA, but not what I was expecting from Sculpin. Nice classic Sculpin flavors of orange marmalade with just a hint of spruce and pine, but not bitter like I was expecting. Probably wouldn't even classify it as west coast. It's good, but only a slight tweak off of the original Sculpin, and my bottle was fairly old so I was probably missing some hop quality. (Final Rating: 3.59)

I loved the original Sculpin so I tried the Grapefruit and this Spruce tip too, but they don’t seem to be able to catch up with the first one...
I mean, they are decent IPAs, especially Spruce tip, adding this ingredient makes your brew even more dank and earth (and of course piney!) which is great. Kind of enhances the hop aroma and bitterness as well - but it kind of fails to bring that punch the original had. Why is it so?
Nevertheless, the end result is still a way-above-average IPA, with the exciting extra of spruce tips. Good enough for every craft beer aficionado.

Poured from a brown 12 oz. bottle. Has an orange/beige color with a 1/2 inch head. Smell is dominated by spruce. Taste is of spruce, citrus peels, a bit of resin. Feels medium/full bodied in the mouth and overall is an interesting take on the style, and a decent beer.

Yes, there is a date on the side of the bottle. The pour is orange. The aroma is spruce tips & so is the taste. If you like west coast IPA's you should be delighted with this beer, but it's very bitter, not a beer that you want to sip & savor. I like this beer better than the regular Sculpin IPA. Cheers! B

On tap at ballast point

Have enjoyed other sculpins so gave this a shot since DFH PA Tuxedo is a personal favorite but harder to find. Pours a nice golden color with head that quickly dissipates. Smells hoppy but no significant spruce detected on the nose. Nice smooth feel but the taste doesn't flow right. The hoppiness fights the after spruce taste.

Appearance: It is a very hazy gold and beige color with a short creamy textured white head. It has good head retention and lacing.

Aroma: There is a very light aroma of what smells a bit like peaches.

Taste: There is a good amount of a pine flavor to the beer and just a touch of orange character.

Mouthfeel: It is smooth and easy to drink with a medium bitterness. Good carbonation.

Overall: The beer label states that this is an "INDIA PALE ALE WITH SPRUCE TIPS." It doesn't smell like spruce but it definitely has an "evergreen flavor." There is a lot of pine character to the beer but it cuts it a bit with a note of citrus. It's enjoyable and I would drink it again. I would recommend it.

Pours a clear honey gold with a white pillow of a head. Nice lacing. Aroma is tropical fruits and berries. Flavor is berries and honey. Just a hint of piney hop bitterness in the finish. Feel is syrupy. Overall a very fun beer.

This sculpin blend did not work for mat at all. Regular & Grapefruit too good.

Question: Is this as good as the brewer's notes make it out to be? Answer: Indubitably. Appearance doesn't leave much to be desired, for sure. An aggressive pour from a 12-ounce bottle into a long-stemmed wine goblet yielded three fingers of thick white head atop a slightly hazy dark orange body. Pretty reddish-orange highlights, lots of sticky lacing. Nice burst of resiny spruce aroma, with notes of light caramel,orange, grapefruit, strawberry, and citrus zest. Medium bodied, with a sticky, resiny finish and a bitter and slightly fruity aftertaste. This sample was a little on the malty side, but deliciously drinkable nonetheless.

Light hazy with a white head. A lot of lacing.

Pouring from a 12 oz. can into a pint glass, this beer pours out a copper color and forms a pinky width of white crown. Not hazy, but not clear. Can see finger shadows on the other side of the glass.

The nose brings pine being the most prominent. It mixes with a nice tropical like citrus. Some wood notes.

The mouthfeel is dry from pine, grape presence.

Overall, I love those berry notes and it still provides a nice pine to it. All balanced, dry and clean. And the most balanced pine beer I’ve had so far.

L: Pours amber in color. Unfiltered appearance. 2 fingers of a bubbly white cap that dissipated rapidly. Tight ring retention around glass perimeter with appealing amounts of lacing on glass.
S: Malt backbone prominent with notes of citrus. Spruce is mild on the nose.
T: The malt backbone sets the foundation. The spruce really shines, especially on the finish. Citrus flavor throughout with moderate dank resin. Nice hoppy piney er I mean, sprucey finish. As I drink it, the more malty bready sweetness I get. Spruce flavor resides in aftertaste.
F: Medium in body and in weight. Soft in feel but still is light and smooth to drink. ABV is on the lower side, but that seems to work well here.
O: Very enjoyable offering. Makes me want to revisit the OG sculpin. This was a treat! I am very grateful to have tried. Cheers!