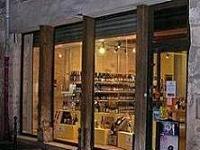 View: Place Reviews
Reviews: 63 | Ratings: 98 | Log in to view all ratings and sort
Reviews by Jeffo:

Visited La Cave on a recent trip to Paris. Probably the best known beer shop in town. Thanks to Brandon and Tommy for recommending this place to me.

Pretty nice little place inside. It's got a big tasting table in the middle and the table, and whole shop for that matter, is appropriately messy. For some reason a beer store can't be too tidy. It's just not right. Small and quite, making it a rather cozy place.

If we think of quality in terms of rarity, then there's some rather fun stuff here. If you're into obscure craft, then this place has lots of small, French breweries that you will never have heard of. There will be small batch stuff too that barely even makes it to the French market at all. No space is wasted on regular French grocery store brands.

Unfortunately service was a little disappointing. The guy was passionate and interested in giving recommendations, so that was very nice. This type of service is expected at small beer shops in this part of the world, however. Where this guy completely screwed it up was that he took product out of my hands.

I was very happy to see some Mamouche, which I had completely missed in Holland this year. There were three bottles on the shelf, so I was going to happily buy two. I don't like buying the last bottle of something unless it's something I've never had before, but there would still be one more on the shelf. As soon as he saw me pick up one, he jumped up, ran over and pulled the other two off the shelf. He said he wanted to keep them for his friend but that I could buy the "last one" in my hands. I explained myself and put it back. That seemed to offend him. He then went on to tell me that he had two more boxes of Mamouche in the back that he was holding for his friends too. He shrugged it off... "They are my friends... What can I do?..." This was a complete ass move. If you forget to pull something off for your friends, suck it up. They will understand. Pulling product out of customers' hands is just poor practice.

Selection is great if you're interested in the French scene. The walls are packed with small French breweries that most people will never have heard of. Ask for some recommendations and give some stuff a try. There is also a good selection of Belgian lambic at the back. Other imports are scarce, but there's the odd Dutch, Danish and American brew sitting at the front of the store. These are probably just some random things the distributor brought in, or random stuff he's traded tourists for, as there doesn't really seem to be any rhyme or reason to anything there. Still, interesting to sift through.

Prices are fine. Most things are reasonably priced and follow a format structure, though there are some brews, mostly the more interesting ones, that are priced differently. I was prepared to spend a lot of money there before the Mamouche incident, and if I had spent the money I brought, I could have walked out with piles of stuff. Prices are fair for the most part.

Anyways, this is a great little store in the middle of Paris; worth going to if you're there and/or are a big fan of the French scene. It would be nice, however, if the proprietor thought ahead about how he wants to sell his product.