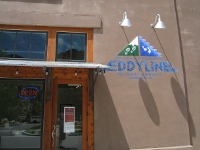 View: Place Reviews
Reviews: 10 | Ratings: 29 | Log in to view all ratings and sort
Reviews by Stillmakingnoise:

V: Pretty laid back spot, with a great atmosphere — live music, lots of locals and visitors hanging on the patio and inside during the summer months (when I visited).
Q: Eddyline's beers are quality — I wouldn't put them at the top of the heap of Colorado craft beer choices, but no one is going to complain about their stable of beers that are very consistent.
Service: Meh. Probably had the biggest hurdle here. We ordered lots of beers, food...and constantly tried to order more beer when glasses were empty, but we sat for a period of 15 minutes between beers at one time. Needs work.
Selection: Was hoping for some one-off beers not available via their distribution channels throughout the state (of CO), but it was pretty standard — all the beers you can buy from Eddyline anywhere else.
Food: Decent. Standard pub fare.

I'd definitely go back, but wish they'd improve the experience with better service, selection and food. Still a fun spot to hang out on a nice day.

V-The Eddyline Restaurant (which is different than the brewery location) is located in the new part of Buena Vista known as South Main. It has a typical brewpub vibe with casual decor, restaurant seating, and small bar. There is nothing interesting about the place; it feels like it was designed to lure in tourists. The place was relatively quiet with just a few groups on a mid-Saturday afternoon during the spring shoulder season.

Q-Fortunately, the beer is better than the vibe. I tried the Java Stout, a black lager, and a black IPA when I visited, and all were pretty tasty. I have also had some of their canned offerings, which I enjoy.

Ser-The best part was the service. The bartender was quick, friendly, and took care to offer me samples when I asked about a certain beers. I also chatted with the brewer, who happened to be working. He obviously knew his stuff and was more than willing to shoot the breeze with me. Nice.

Sel-Eddyline's restaurant serves only Eddyline beers. There were eight on tap, including a pair of tap-room only special brews. Styles ranged from pale ale to fruited wheat to stout to black lager.

F-The food was typical brewpub fare, e.g., pizza and burgers. I had a pizza, which was nothing special, but I was starving, so I ate it. The sandwiches looked filling if you're a big-portion-type person.

O-I always appreciate great service, even if the vibe is a little boring. The food here was OK, but if you're just looking for beer, skip the restaurant and hit the brewery/taproom on the other side of town.

Been here once, pretty tasty food, and their brews are not that bad.

Vibe - Brewery and restaurant that is not located within the heart of the small town, but rather off the Arkansas river. For lunch on a Thursday afternoon, this place was hopping! Small dinning area that seats 50-75, a small bar area that seats around 15 and an outdoor patio that seats around 20-25 (though considering the phenomal views in Buena Vista, this area left a lot to be desired).
Quality - I enjoyed 2 of the 3 beers I tried and have had 1-2 of their cans. Pricey at $6/pint.
Service - Again the place was busy, so this explains why the service was a bit slow. Waitress was very friendly. Took a while to get our food.
Selection - about 6-8 regular options and 4 rotating. Enough variety to please everyone.
Food - lots of options from wood fired pizza, to sandwiches and burgers to soups, apps and larger entrees. Everything we had at our table was excellent!

I got here right when they opened, but only had time for some samples and fills. It was an okay place, but they only had a few beers on tap. I found more of their beers at a couple of local stores, so that was disappointing. Not a bad visit, but it could have been better.

i liked this place a lot, been meaning to get out here for some time now and finally got the chance. its a tiny taproom when that back patio and concert area isnt open, especially given the obviously large size of the brewery facility. very limited seating inside, and it was busy when we were there. very mountain and outdoorsy looking place, all wood everything with a bar built like a little hut or yurt or something. i was surprised and disappointed to see so few of their beers on tap, and so few ones i had never had before. the highlight by far ws the grapefruit ipa, which had an amazing spruce tree sort of nose and a wonderful juicy taste. the others were pretty standard for them, nothing way out there, nothing jumping off the page. i think there were only six or so too, very few. they served pizza and other snacky foods, but we did not eat. looked quality though. seems to me like the time to be here is in the summer when they have some music playing and their patio is open, its a pretty ski lodge type scene the rest of the time, busy, less chill, but still cool. i was just hoping for a better selection of beers on tap. they were too busy for the service to be amazing, but it wasnt bad either. ill be back for a concert night, but not in a rush otherwise. looks like they can most of their relevant beer and send it to denver now anyway...

This brewery is located in Buena Vista a town north of Salida. This is a difficult to find place. It is in a faux area of downtown, you know one of those that developers build to make it look like it is part of some other development. There is a main street in Buena Vista, then there is a South Main Street where the brewery is located. If the beer was better the difficulty would be worth it.

Walking in you get the out door sports vibe. A very small bar of about 4 stools is opposite the door. My wife and I tried the CPA (Colorado Pale Ale) and the Chili Porter. I bartender who was unaware I was sitting at the bar, even after she helped two guys next to me, didn’t know what Chilies were in the beer. None the less it was good. Did eat here and split after a pint.

Some of the service was good, greeted at the door, and asked if we have been helped by another gentleman. But the bartender was clueless.

Don’t make a special effort to get here, but if you are nearby it may be worth stopping in for a pint.


Eddyline Restaurant in Buena Vista, CO
Place rating: 3.72 out of 5 with 29 ratings