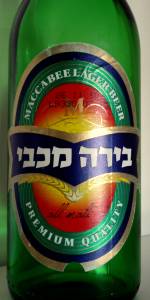 A very underwhelming American style Adjunct beer. Bought whilst having a beach holiday in Eilat.

Purchased in Jerusalem and drunk alongside the Palestinian Taybeh beer. Completely Hebrew label, which I thought was pretty cool

Pours a fizzy, bland piss yellow with nothing but a seltzer large-bubbled carbonation film ringing the glass. Very light bodied—although there's little carbonation, it streams incredibly quickly to the top, as though its life depended on not being surrounded by this beer any longer. Looks awful.

Nose is horrid. Weetbix, corn, skunk, dodgy hotdogs. It's meaty, but artificial with the turgid funk of dishwater. Urgh... It's just horrible. Not only this, but the entire nose is wrapped up and laced with a sort of corn-syrup sweetness. It's awful. Just awful.

Taste is the same. Sweet and cloying, with husky corn grain characters, seltzer acid, minerals and grit. Finish is metallic and meaty, making you want to wash out your mouth with something else. Urgh. The feel has a tiny amount of spring to it, but otherwise. Damn, this is a terrible beer.

Horrible, horrible brew. Just atrocious. Bad even for the style. Sorry, Israel, but Palestine brews way better beer than you.

Poured into a pint glass from a .65 L green bottle

A: Pours with three fingers of white head that slowly dissipates and leaves only a thin spotty layer on the top of a clear rich spring-gold body. A little lacing sticks around.

T: Toasty malts initially hit the tongue, but phase into the odd hop-taste, maybe hop extract was used? It doesn't taste quite right here, as if something else was used instead of the hops (which isn't necessarily a bad thing, it is just different than I am used to). I don't know if this variation is a bad concoction of off-flavors, or a different style of beer that I am not familiar with because it isn't exported. I do detect something like baking soda near the end of the flavor, and it dominates what would be a clean finish of toasty malts.

M: Smoother and fuller than I would expect from such a lightly flavored beer. This tastes something like a bad light beer, but it doesn't have that feel. It feels more like a nice vienna lager, with crisp bubbles that lift the flavors off the tongue, and a body that fills the mouth in a refreshing but satisfying way.

D: Moderately drinkable. Could be much better without the baking soda off-flavors.

Overall: My friend bought this in Israel, and brought it back over 4 different flights. The bottle looks awesome, and everything on the label except the name and the words "all malt" are in Hebrew. I can't decide if this beer is supposed to taste like it does, and is then an interesting variation on the style, or if it is a poorly made beer that contains many off-flavors. I suspect the latter, but maybe there is no way to know?

A: Clear, light golden beer with a white head

O: Nothing fancy but a decent lager; seemed very much like a pilsner beer to me.

Thanks to Billy for this one!

Poured into a glass in Jerusalem, the beer is a weak straw yellow color. The fizzy head quickly disappears and there is no lacing to speak of.

The smell is terrible. Just some watery malts and a hint of cardboard and trash. As lacquredmouse so eloquently discussed, there is a strange sweetness present as well. Besides this, its not worth going in for too deep of a smell. The taste is dominated by cheap malt with a hint of yucky acid hops.

The carbonation is ok and the mouthfeel has some body to it. But this does not save the beer by any means. Overall the best thing about this beer is its name. Maccabee... otherwise it is rubbish in a bottle. Put this one at the bottom of your want list and thank me.

Got it from Israel, can 0,5 L
A - Lots of bubbles at first, white foam lasting minute. Pale color. Classic pale lager.
S - Very light citrus aroma from hops. Decent.
T/M - Awful. Really, one of the worst Lagers i ever tried. Some bitter taste with undefined undrinkable aroma.

L: Pours hazy straw with a 1” white foam cap that fairly quickly disappears.
S: Light grains with faint skunk and hops.
T: Light grain on the palate with traces of green apple but on the whole not a very big flavor profile
F: Light body and above average carbonation.
O: This might be welcome iced cold in a dessert with no alternatives. Not much going on here to distinguish this beer in any way.

Not much to this lager. No smell, little taste, and very watery in the mouth. Expected better for all of the former Europeans who live in Israel. Might quench your desert thirst, but so would water.

From the bottle purchased in Germany, this all malt beer pours a light golden color with a small head, soon diminishing to a ring. Leaves a bit of lacing. Grainy scent. Pleasant, unremarkable flavor. Nice on a hot day, I suspect!

Clear golden color with white head. Aroma has really generic clean malt and not much else. Taste follows, really bland but clean. Medium to light body with medium carbonation. Overall it's a drinkable macro lager.