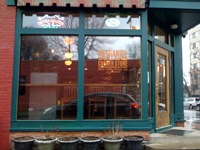 View: Place Reviews
Reviews: 9 | Ratings: 24 | Log in to view all ratings and sort
Reviews by wethead:

Tucked away on a corner in the lovely Southwedge of Rochester is a great and wonderful place called: Nathaniel Square Corner Store.

I found this place about 5.5 years ago and have been going these ever since.

They stock beers that no one else around does. They also have ( 4 ) beers on tap that can be filled into growlers that they also sell.

The best place to buy beer and snacks in Rochester and in the Southwedge! - Awesome staff, Clean fun place to shop with a unique country store ole time style - Love this place!

The corner store is my go to beer stop. It's proximity is key, and you won't find a better staffed bottle shop (even though ajs staff is amazing as well). These guys know their beer and usually share whatever is on hand. Only 4 tap lines for fills but there is always something on you want. They have a great cooler selection as well as fantastic rare selection. They cellar many beers and pull stuff randomly. Can't say enough for this shop

My favorite place to buy beer in the Rochester area.

The selection is smaller, at least compated to BOTW or AJ's, but always interesting. They go through their inventory very quickly, so you could come in two days in a row and there's gonna be some new stuff laying around. They have a big cooler in the back with all sorts of good stuff, US and domestic (I just can't stop getting those single bottles of Aun Mas Cafe Jesus that always seem to be there, despite the price). There's a smaller cooler on the left wall with singles. Not everything is in singles, but if you ask nicely, they might break stuff up for you or let you know when they put certain beers in the singles cooler. On a shelf across from the cooler is a shelf that always has good stuff, and seems to be the shelf where bottles go before they go into the cooler, waiting for room. There's a "vintage" cooler to the right of the big cooler that has older Belgians and some other interesting rarities, always worth a look. The shelf by the coffee usually has some good stuff too.

They keep the best stuff behind the counter, but they never keep it under the counter. It's always visible, and anybody can buy them. They don't post the arrival of their biggest releases, or talk about them over the phone, in order to give everybody a better chance of buying it.

The growler station is small (4 taps) but very good. I've seen some incredible local stuff, as well as rare, high gravity growler pours. In the last few months I've seen BA Freudian Break, Apple Brandy Barrel Aged Imperial Smoke from the Oak, Double DBA, BCBS, and BCBW, amongst other great selection. The lines are cleaned every time a beer is kicked, so it is very clean.

One of the best parts about the place is their cellaring program. They are one of the only places in the area who does a program like this. Every so often they'll pull out some choice offerings from the cellar and put it at a decent price. I was able to snag a 2011 Victory Dark Intrigue and a 2010 Bigfoot for ok prices.

Haven't tried any of their various snacks laying around, but they seem good.

Definitely worth a stop. You won't regret it.

You visited this place. Write a review.

Nice little corner store, most of the beer is refrigerated. Some beers that Beers of the World didn't have but found the selection to be less than BOTW. All solid but there was no Southern Tier Warlock and there was missing a few Founders. The guy at the cash seemed somewhat knowledgeable but not too much. I like the vibe of the store though.

This is located in the South Wedge neighborhood in Rochester.

Atmosphere - this is a convenience store with a big cooler full of beer on the back wall.

Quality and selection here were pretty good, they had a lot of NYS brewery's offerings on hand (Ommegang, 3HB, Capt. Lawrence, Brooklyn, Lake Placid) as well as domestic usual suspects (DFH, Stone, Founders). I was a bit let down by the sparcity of their Belgian/German export selection, but I did find some domestics that I haven't been able to find elsewhere. Service is where this place really shines. Got the opportunity to chat beer with Bob, who appears to be their beer conneiseur, very friendly and very knowledgeable about beer and the products that they carry. Prices are maybe $1-2 higher on some items than other places in the area, but not too exorbitant. You also have the option of breaking down 4/6 packs into singles, which is a plus. They also had 4 or 5 beers on tap available for growler fills. Overall, I was impressed with what NSCS had to offer and next time I am in the ROC, I will be sure to stop by. Recommended.

Great little place to pick up a six pack near downtown. A pretty good selection of Craft brews to go, great lunch counter, and other connivance items.

The best thing they do though is the 12 beers of Christmas, two custom selected six packs of craft brews one to enjoy every day of the event. I hope they keep that up.

They used to do some great tasting events over at Johns Tex Mex next door. Those were a lot of fun, I hope they come back.

They certainly don't have everything but they have enough, and are close to City natives.

A small joint located just down Alexander St. and across from the Colony bar.

The Corner Store is definitely an underrated gem of the Southwedge section of Rochester. I recently bought a Stone Levitation Ale from this place and noticed that it hosts tons of microbrews from all over the country. If you want to check availability before visiting, their website is updated on a regular basis, and you will be bound to find whichever you seek at the Store.

Beers come in 6-packs, 4-packs, 0.5L bottles, singles (12oz). Matching beer glasses are available if you're into collecting (I got one for the Stone). If you're a college student at the University of Rochester, I would highly suggest this place as to its wide selection of beers, foods, and its convenient location.

Fair prices on a ton of great beers. Agree with the other poster who says it's the best place in the Wedge to buy beer.
The employees are very helpful and fun as well.
Space is very nicely laid out with all the brews easy to find.

Why go all the way to Beers of the World when this place has so many awesome beers available?
Bombers and 40s available as well. All they need to add are paper bags with the store logo so you can sport your 40 in style while sipping on your porch or in your driveway.
So great even your Nemesis will want to shop here!

More than just a convenience store, this place has an incredible variety. Over 187 different kinds of beer. The entire back wall is a cooler filled with Flying Dog, Ommegang, Sierra Nevada, and a whole bunch more craft beers. They also have a selection of Macros and 40's. The only place in the neighborhood where you can get most of these beers. The place looks really nice too, with hardwood floors and old shelves from a library. This is definitely the place to go to buy beer in the South Wedge.