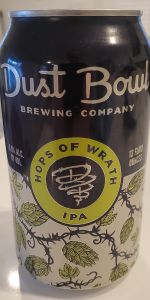 Notes: "Hops of Wrath is an India Pale Ale with moderate bitterness and a solid malt backbone. It has a fruity, citrus aroma, bright hop flavor and clean finish at 6.6% abv."
View: Beers | Place Reviews
Reviews: 54 | Ratings: 212 | Log in to view all ratings and sort
Reviews by AleEvangelist:

Today, I had the privilege of tasting Dust Bowl Brewing Co.’s IPA, the Hops of Wrath. For starters, Don Oliver is by no means an inexperienced brewmaster. He’s been homebrewing for a couple decades now, I believe, and the beers of his I’ve been privileged to try have been STUNNING…..all of them. :) So when I saw the Hops of Wrath at my local Save Mart in Oakdale, I couldn’t help but grab a bottle. I had a feeling that this was Don’s beer, as his dad had told me that he was opening a brewery in Turlock. I was ecstatic! Now the beer:

Appearance: The beer pours like a pale with a nice head that had some staying power. Even now, after it’s been sitting for a bit, there’s a thin layer of foam, with nice lacing on the sides of my glass. The color was pale amber, which you’d expect for an IPA. In short, it’s pretty. :)

Smell: Served cooler than room temp, but not cold. This beer appears from the aroma to be extremely well-balanced. I can smell sweet malty notes mixed with some floral/citrus from the hops. In all, not overly-hoppy in the nose, which bodes well for for the flavor. This beer is not hops kicked up to 11, which makes for a more traditional IPA vs. a West Coast style. (Nose is slightly stuffy, sadly.)

Taste: A very balanced blend of hops and malt! American brewers have tended to the extreme ends of hoppiness and alcohol lately. Stone is a good example of this. Those are great beers, but this leans more toward the traditional IPA side of things with aromatic and flavorful hops. It’s really tasty, bursting with the resin-y hop flavor associated with excellent IPA’s. Plenty of malty sweetness to balance it. If you want to taste more hops in this beer, I think it could be served colder. I prefer balance, so I served it more cellar temp which let the hop notes play second fiddle to the excellent maltiness! Still, the finish is all hops. The hop flavor loves to linger on the back of the tongue to remind you that you are drinking the Hops of Wrath. If they don’t hit you in the front of the palate, just wait a minute!

Mouthfeel: Since the beer is not overly alcoholic, it’s not as chewy as more extreme IPA’s would be. Not watery, by any stretch of the imagination, but very drinkable. Also not syrupy, which definitely helps the flavor not be so darn sweet.

Overall: This beer is VERY drinkable. Served colder, the hop notes would be more prominent, but they’re not missing at all. I spent the evening drinking some Noble Pils from Sam Adams, so I’ve been enjoying hoppiness all evening. This beer was the perfect closer to a great day! Well-balanced is the key to this tasty beer, something that takes skill to hit. A lot of people make IPA’s, and they war with who can use the most hops, or the highest alpha-acid hops. Someone who balances perfectly with malt possesses skill, and I look forward to seeing what comes from Dust Bowl Brewing Company!

A: 4.5 Pours a reddish gold with a large, creamy looking off-white head. The head is very uniform and actually quite pretty.

S: 4 Fairly mild aroma overall which is a bit disappointing; based on the name, I was expecting quite the hop bomb. There’s some pine first with a little bit of grapefruit as well. Fresh-cut grass, dank, and some honey/malty sweetness are present as the beer opens up.

T: 3.5 While the hops were dialed back on the aroma, they are even more subdued on the palate. The flavor starts with a pretty big dose of malt sweetness followed closely by some bitterness and a slightly sulfurous finish. There’s a little bit of lemon flavor that’s pretty nice, but any fresh flavors are overpowered by malt and bitterness.

M: 4 The carbonation is nice and the body has a good feel, if slightly watery.

O: 3.75 I was hoping for a fresh tasting, hoppy IPA with little malt, but this is kind of the opposite. If you’re into malty IPAs with a fairly strong bitter element, this might be a great beer for you, but it’s not what I look for in IPAs. At 5-6 weeks old, perhaps this beer has a crazy short shelf life before falling off.