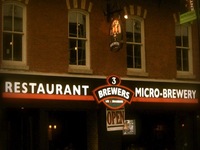 Laid back atmosphere. Did beer flights trying all of their beers. The beers are all good but nothing great. The wait staff was friendly and knowledgeable. Food is good--shared apps while doing beer flights.

This mediocre chain of French based brewpubs, with multiple locations in Montreal(Les 3 Brasseurs) gets little respect in the reviews from that city so it's surprising to see much better reviews for their Toronto venture. It's beers are bland and uninteresting but are perfect for it's many tourist customers who generally don't know craft beer. Really people, B+ and A- ?? If 3 Brewers actually deserves those ratings, what would the Dieu du Ciel brewpub in Montreal rate using that scale, AAA++? It's too bad so many American BA's, who obviously aren't familiar with Toronto, waste their valuable time here instead of seeking out the many better beer venues Toronto offers.

I'm amazed a local BA rated 3 Brewers a B+(3.8) while giving The Only Cafe a C-(2.66). A cookie cutter, chain brewpub with a tourist crowd and mediocre beer doesn't rate better than a funky, one-of-kind bar with a good selection of Ontario craft beers in my mind, but "different strokes" I guess. As to the comments below by one of my countrymen about Canadian brewing lagging behind "the complex and delicious beers" available in our country - he might have thought otherwise if he didn't base part of his opinion on The 3 Brewers bland offerings. Also, many Americans are so into our overhopped, extreme/big beers that they automatically dismiss many great beers that happen to be well balanced, true to their style, and have a more subtle flavor profile - as are many Canadian craft beers.

My advice to all visiting Toronto is to avoid wasting your time at this brewpub. Check the reviews from Montreal to get a more accurate picture.

Walked in on a Saturday night after a long drive from Chicago to Toronto, looking to slake our thirst and relax a bit. We got the "special" beer, and then a 5-beer sampler of their regular offerings. The beers ranged in ABV from 4% to 6.7% (or so, going from memory here). There was an amber, a wit, a brown, a golden, etc. Standard styles, but I was only hoping for high quality beer and not expecting extremity. Still, the beers were all rather dull. The amber and brown had an unwanted and (I'm assuming) unintended sourness to them; the others did not come together or cohere or impress. Very dull stuff.

However, the atmosphere is nice, and it's got an upstairs as well. The clientele was fairly diverse, if leaning on the touristy side. It was packed but remained comfortable. Service was excellent, very attentive, very friendly, all that despite them being rather busy that night. When asked how we liked the beers, I tried to be polite but must have seemed unenthusiastic...I mentioned I preferred more "intense and experimental beers" (tried to keep it general) so our cute blonde waitress told me of two places in Toronto I had to visit, and I did exactly that. She was right on, so thanks to her for that tip!

Before tasting their beers, I was excited to get my hands on one of the beers that they had bottled and displayed behind the bar and shown in the menu. But it was explained to me that, by law, they can't allow customers to purchase the bottles and leave the premises with the unopened bottle. But after tasting their beers, I was glad I didn't spend the money. Nice try, 3 Brewers, but there are betters places to spend your beer dough in Toronto.

My girlfriend & I stopped by the 3 brewers a couple times on our trip to Toronto. The place was always packed, which was nice to see. The beer in Canada, including the 3 brewers, is heading in the right direction, but they are still a few years off from creating the complex and delicious beers available in the U.S. Their new beer La Belle Province was their best offering. I got their roasted lamb on a baguette with fries, it blew my mind! So delicious! Overall I would reccommend the 3 brewers to anyone in Toronto!

Multistory chain brewpub on Yonge st. This place was sold to me as the Swiss Chalet of France. It may be an appropriate descriptor as there really isn't anything special about this place at all - food, service, prices etc. are all typical of a basic pub.

OTOH if your average French chain restaurant brews its own beer, I would say the French drink better than we do...

4 brews on tap + 1 bottled premium beer. I had the 4 on tap - blond, wheat, red and stout, with the stout replacing the regular dark ale. The first three ranged from mediocre to ok, whereas the stout was excellent.

Worth visiting but I can't see this as a destination. If these start popping in your average suburban mall though, I won't be complaining.

This place is absolutely huge, or at least it feels that way because of all the split level floors. The washrooms may be difficult to get to after you've had a few because it up and down a couple flights of stairs. Not a bad place to watch a game - I watched the semi-finals of Olympics hockey here, go Canada!

The beers are all ok, but nothing really stands out. I've tried all 4 regulars plus the maple. I'd like them to have some more variety. The prices for beer are good though, with all pints coming in below $6 and litres below $10.

The service has been really fast and friendly every time I've been. No complaints at all. They may not have a lot of beer knowledge, but it isn't necessary with this beer list.

The food I find to be just a bit better than a chain restaurant. I'd rather eat here than at Hard Rock, Milestones or Jack Astor's, which are all at the Yonge/Dundas corner... however that isn't saying much.

If you are a tourist, I wouldn't make a special trip here for the beer given that Volo, Duggan's, Beer Bistro and C'est What are all within a 15 minute walk. If you are walking from Duggan's to Volo and feel the need for a stop (20 min walk can be pretty challenging, I know), then you could do worse than this for a pit stop.

Atmosphere- The atmosphere was definitely nice some music playing and multiple floors left the wait to be not that long, considering how expensive things can be in toronto this place was actually a relative good value and quality place, two bars but most beer appeared to being consumed at tables on this friday nite,

Quality- The actual quality of the beers was actually I thought very good, for a brew on premise pub I had not heard of from america i was quite impressed, was even more intrigued seeing they had many more locations globally beyond just canada, The dark ale was the best of the batch with the red ale i thought being slightly the weakest, the also offered a 750 ml of a beer with maple syrup but I did not get a chance to try it though it did seem intriguing, overall from a quality stand point you will not be disappointed,

Service- The service was very good there they made one mistake slightly with one of our orders and they gave it to us for free, at one point they were touch slow with beers but ill give them the benefit of the doubt due to that it was very busy time because there courtesy was excellent not that usually seen around where I am from,

Selection- I gave them a 3.5 on selection because really you are limited to there beers which is fine and normal but I cant say selections through the roof, i gave them slight boost though because there selction of whiskeys and other liqours were excellent and fairly priced for the area,

Food- the food was I would say good but nothing that blew me away, I did not get to try though one of their trademark flamms which I probably should of, overally everyone seemed okay with there food thought not blown away overall,

Value- overall especially for the especially pricey area the values and prices were extremely fair on there beer and spirits, I would definitely recommend the place as a worth while visit while in the toronto area