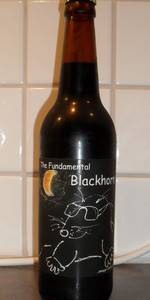 View: Beers
Reviews: 22 | Ratings: 60 | Log in to view all ratings and sort
Reviews by ThaCreep:

The nose feels clear all the power of the drink and all its complexity. It offers complex flavors and strong coffee liqueur and dark chocolate melted. Full range of bitter flavors and roasted goes.

In the mouth, the body remains highly drinkable despite significant power and bitterness powerful but controlled carefully (you do not feel the so-called 120 IBU). The roasted malt adds to the persistence in this perfect taste balance that provides additional miles flavors (mocha, praline chocolate, alcohol, coffee, honey roast ...) and oh so delicious. All stands and gives a slap in the mouth. Maturation in oak adds more complexity, if that is possible.

A real spanking to the so-called "russian imperial stout" from the same Danish brewery. BlackHorn is permanently closed in the top of the best stouts in the world.

Bottle: Poured a pitch-black color stout with a large dark brown foamy head with good retention and some lacing. Aromas of roasted malt with light lactose notes are interesting. Taste is a mix between some dry roasted malt notes with some light black chocolate and some subtle lactose notes. Body is full with good carbonation and no apparent alcohol. I am starting to find that the beers form this brewery are lacking a little bit of character to make them truly interesting and wanting to drink them on a regular basis.

The liquid is jet black, the ½ finger thick head is dark chocolate brown and very compact. It leaves some lacing on the glass.

The smell is strong and matured. Coffee candy, oak barrels, prunes, some sour malty notes, sweet honey, caramel and red berries. Dry notes of dark bread and Irish whisky. Alcohol in the background. It is a bit… straggling?

The taste is at first dry; however a smooth sweetness soon emerges. Strong sweet coffee, honey, liquorice, some salty notes. Roasted malts, of course, but also some dark rum and whiskey fudge. Very fragile smoked hints. Medium body. Some raspberries and plums/prunes. The aftertaste is dryer and bitterer: Hints of tobacco, alcohol, fresh flowers, coca and spicy hints of nutmeg. The finish is smooth with fruits, cream candy and dark chocolate.

The carbonation is mild, the many smooth bubbles small. The liquid is semi-dry and semi-smoot.

The Fundamental Blackhorn is fundamentally black. Call me uncreative if you like but this is such a seriously, staunchly opaque beer that it leaves little else to describe it by. Not even the brightest bulb in my room can unearth any colour from this scorched complexion. When even the head is darker than sable you know you're in for something good...

Hornbeer are great at making interesting *sounding* beers. I failed to appreciate any of the birch- or peat-smoked malt of their Black Magic Woman and the distinguishing features of this offering - the chestnut and oak wood chips on which it's aged - are equally unapparent. They may contribute to the overall product but their influence certainly isn't noted in the aroma, at least not much.

In fairness, the wood probably shouldn't dominate. And besides it's tough to be noticed in a recipe comprised majorly of black, chocolate, and coffee malts. These ingredients ensure a dense, rich flavour profile that includes the dark chocolate and coffee notes you'd logically expect as well as more intricate flavours and aromas of black forest cake, tiramisu, and fine Belgian truffles.

Not to mention the fact that those 120 IBU kick in sooner or later; such a robust hoppiness can't help but impart a pungent piny character and the woodsy, leafy, earthy notes of the forest floor. Bitterness is surprisingly kept in check, however, and my money is on the honey - that's another ingredient not exactly noticeable but one that plays a strategic part in the overall scheme.

My initial notes for The Fundamental Blackhorn refer to it as "so friendly it's almost frisky". I'll admit I'm not wowed by the depth or complexity of this sizable offering but I am again impressed by how approachable it is; the integration of hops, malts, and wood rolls rich, dark, bitter flavours into a notably smooth package that's way too drinkable for how strong it is. Get cozy with it.

500ml bottle - so, this is sort of the un-peated Black Magic Woman, then?

This beer pours a solid black abyss, with the barest of red cola basal edges, and two fingers of puffy, very loosely foamy, and quite bubbly dark brown head, which leaves a bit of random descending alien warship lace around the glass as it genially abates.

The carbonation is fairly understated in its plainly rendered frothiness, the body a solid medium-heavy weight, and mostly smooth, with a hard to pin down creaminess always at the outer gates, as it were. It finishes generally sweet, the cocoa, honey, and malt seeing to having it their way (apologies to Burger King), alongside the lingering generic hop bitterness.

Overall, this is yet another big-ass brew from this Danish concern, but one with a claim of '120' IBUS. Let's address that, shall we? Ok, nothing here suggests a huge (I can only picture M. Trump right now, fuck) hop offset, but there is just enough actual bitterness hanging around here to keep this offering from going off the proverbial rails.

had a ways back at a tasting from notes...
Looks black with a deep red edge, has some peaty smoke, licorice, charred wood, faint coffee, earthy top soil, no booze anywhere, I get some grit and a charred finish, intense dark stuff and I'm grooving on it

A: Pours pitch black with a large thick brown head that slowly dissipates into rich lacings.

M: Aftertaste lingers for some time and holds a burnt/smoked bitter sweetness. Body is full and smooth, while carbonation is moderate.

O: A really nice Imp. stout. Not too much of anything, but clearly not too little either.

A - Pours black with a great mocha head of one finger. Big bubbles in the head and some good carbonation coming up. Good lace ring and a film of retention.

O/D - Solid stout. A touch too much oak on there, but otherwise tasty.

The beer is black with brown tones and has a tan head, rather little lacing but very good curtains.

The smell is much chocolate and oranges (like chocolate covered orange marmalade), but also slightly liqueur and some cask nuances. A whiff of glue as well.

Little carbonation, soft and oily, a big body, not dry.

Very nice after dinner, slowly sipping is the formula.

Appearance - Dark brown colour with an average size frothy beige head. I can't make out the amount of carbonation showing and there is some fair lacing. The head lasted for over 5 minutes before it was gone.

Taste & Mouth - There is a below amount of carbonation and I can taste malts, chocolate, and coffee. There is also some smoke/charred notes, hops, and a bit of a dark fruit flavour.

Overall - A little bit of an odd peaty/metallic flavour going on at times, but for the most part a very solid beer worth picking up. The alcohol is well hidden.