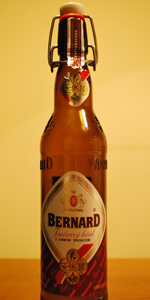 Jantarovy Lezák - the way I heard in Prague it means "mixed" beer. In our case it stands for a really well-balanced mix of dark and pale pilsner.
As Czech pilsners (or rather lezák, as they call it) are usually quite mild and low on bitterness and carbonation, this mix also feels extremely smooth. The two different tastes create a quite interesting flavor with on the one hand a little strength in taste but on the other hand immediately light and drinkable.
I found this beer extremely enjoyable and drinkable. It is somehow typically Czech, I feel like being there as I am drinking it. Even though it is a mix, It is very well created to achieve a perfect balance - it is the best of both worlds. Recommend it!

quite an interesting taste of beer, but still lacks the richness of taste, seems to me a little bitterness in the taste, aftertaste and a very short, but the cons are not influenced my final grade !!!

brilliant dark lager with a taste of walnut and chestnut.

Pours a completely clear dark ruby color with a heavy, just tiny off-white, head with nice retention.
The aroma is pleasantly malty with some sweet and fruity addition. Also some alcohol smell present.
The taste is quite sweet at first, followed by a quite hard bitterness.
Drinkable and full of taste.

Picked up in Prague during my last trip.

Pours a nice creamy 2 finger head with lots of bubbles on top, that fades at a med pace with tons of soapy lacing, over a darker colored hazy mahogany brown beer.

Nose brings a nice aromatic malt aroma, toasty brown malts, hint of caramel and toasted grains, light molasses like sweet addition, and just a touch of toffee, some wheat aromas but a darker toasty brown wheat, and a faint fig like fruitiness, then into grassy hops, milder than most good Czech beers I had, but enough of a hop bite.

Taste starts with some sweet malts, a little syrupy, with caramel, toffee, a molasses flavor with hint of a woodsy dark earthy starch sweetness, a little toasted grain, some biscuit flavors, and plenty of wheat, dark toasted wheat with a little caramelization and sweet candy like flavors, touch of candi sugar like flavor as well. Hops are much lighter too, hint of a grassy earthy hop but barely, just a touch of bitterness, which I guess is more dunkel like but not like most of the good Czech beers I had. Finish on the other hand has more of the bitterness, an earthy almost spicy bitterness, but also a sticky syrup sweet lingering flavor with more toasted wheat, toffee, molasses, and caramel like flavors lingering, little biscuit as well.

Overall not bad, not at the top of the beers I had from Czech, decent and much better than anyhting else that makes it outside of Czech, fairly tasty but nothing special.

This beer is also called Bernard Amber. It has a ruby dark brown color. Poured a decent thick head that dissipated quick. Low carbonation with tiny bubbles.
Mild aroma of hops and fruits, but once it gets warmer the malt assumes it.
Tastes sweet caramel malt with a mild bitter and dry end. Some hints of spicy and smoked flavor. Good drinkability.

I bought this bottle two months ago in a German supermarket, nearby the Dutch border.

I am calling this one a dark munich lager beer because this fits the description of this beer the best.

I never saw this beer before so it was something to try. Pouerd it out in my Struise glass. The beer has an amber colour and the head is broken white. This one has the looks. Nice carbonation.

For the rest this is a typical supermarket beer, nothing fancy, just a very drinkable beer.

Nice soft smell of burned malt. It's a bit of a watery beer. Good for warm summerdays.

Bernard Jantarový Ležák 12° from Bernard Family Brewery
Beer rating: 82 out of 100 with 33 ratings