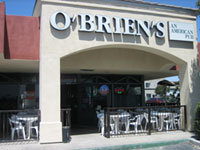 We showed up here just after opening on a Sunday and located it easily using the descriptions from other BA's barfly reviews. There were a few people on the patio, which looked to seat about 40 people, enjoying the weather or watching TV. There were several more TVs inside showing a variety of sports programs and seating for about 45 more. The interior was dark green and there was a dartboard in the back. There was a bunch of beer swag on the walls and tons of coasters pinned up everywhere, plus pub gear for sale behind the bar. The clientele seemed quite eclectic, with a combination of regulars at the bar and families at the tables. The bartenders were very familiar and friendly with their regular patrons as well as newcomers. They had roughly 20 taps going during our visit and were stocked with a great variety of beers from Alpine, RR, Port Brewing, Alesmith, and even New Belgium La Folie. The tap list was separated out into locals vs. craft vs. imports, with pricing broken out into the same groups. Pints ranged from $4 for locals to $7.50 for Belgians. There were a lot of bottled selections as well, but these were a bit pricier and it was difficult to justify bottle purchases when the tap list was this good. The food was solid too. My wife had a soup and salad that were decent and my brewer's plate (cheese, sausage and fruit) was good. The burgers looked tasty too, but we didn't stick around long enough to try them. Overall, I was satisfied with my visit. I could see this being a regular stop if I lived nearby and would definitely come here again when I next visit the San Diego area.

Accidentally stumbled upon this as I was looking for a good Asian spot to eat on Convoy. I saw this place and its name sounded familiar from years ago. Lo and behold, it’s THE O’Brien’s. Probably not as legendary these days as it was back in the 2000s when it was one of those truly special places to find truly special beers. The Pliny, fried chicken sandwich, and tots were all delicious. And as an bonus, this is a Liverpool FC fan club/bar!