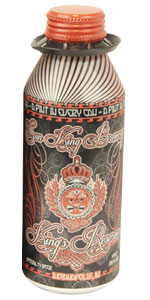 Tons of yeast expression on the palate, lending a huge banana and vanilla note to the proceedings. Brown sugar, toffee, raisin, dark bread; lighter notes of leather and chocolate. Bourbon is noticeable but entirely complementary.

Smell: Smooth Bourbon aromatics of oak and vanilla join with the caramel and dark fruit tones of the Dopplebock

Taste: The Bourbon makes its presence known at the outset, with caramel, molasses and dark fruit tones joining; oak and vanilla add another dimension, after the swallow; the finish and aftertaste emphasizes that smooth Bourbon tone detected in the aroma

Overall: You don't come across many Bourbon barrel aged Doppebocks; surely, I can't recall another off the top of my head; anyway, while the barrel treatment does mask some of the Doppelbock character, this is a really enjoyable beer to drink

Thanks, TravisMason, for the opportunity

No head and just a slight bourbon aroma are the initial characteristics. The alcohol flavor is subtle at first but increasingly present. Overall, this is one of my favorite Sun King offerings.

Whoa, that is some smooth and tasty barrel character. Rich vanilla and toasty, grainy oak, backed by the mild, dark fruits and caramel of the doppelbock. This brew comes out on the more drinkable end of the barrel-aged spectrum, which is certainly welcome.

2015 vintage
16oz screw top aluminum can poured into a snifter

S- bold sweet and malty aromas of caramel & toffee, along with dark fruity notes of fig, black cherry, raisin & sherry. The bourbon barrel lies underneath and adds some spicy aromas, along with oak & vanilla

O- big sweet and sticky caramel and dark fruit throughout, with just the right amount of barrel character, well done

This is a win for sun King and those that get to drink it. Dark color. A little ruby in the light. Very small head, goes away fast. Smells great. Bourbon, vanilla caramel. Same on the taste, with a bit more accent on the dark malt of the dopplebock. Mouthfeel, a bit too carbonated. Overall, I really do prefer a dopplebock like this in the bourbon barrels to many of the stouts that have been put there. I'm glad I still have a few left. I hope they keep well.

Served in a snifter at The Tap in Indy.

Arrives with a light, frothy, oatmeal-colored head. Blackish body with brown and amber hues but an opaque representation. 4.25

Aroma is faint but hints at brown sugar and molasses. 3.5

Rich in flavor, there's caramel, molasses, brown sugar, vanilla and an oaken, bourbon-tinged finish. On taste, this would be a gem. 4.25

Alas, the feel is too carbonated and prickly and soda-like. Not enough to ruin the beer but it does drink lighter than ideal and without the creamy, full-mouthed feel that I expect from a doppelbock. 3.75

Flavor here is great but for a BBA doppelbock that you envision warming you on a winter night as you slowly sip it, this can disappoint.

A - Opaque brown, with red highlights, and a light tan head that forms up about a half inch and fades quickly to a persistent rim and cloudy cast over the top. The lacing is minimal.

T - Follows the nose, but without flowering out with the original malt notes of a doppelbock. The barrel is delicious, but is the sole note in the open. Malt does come forward in the middle, followed by a slightly acidic close, with vanilla elements from the wood.

M - A touch thin for the weight it is carrying, the advantage is that it does not overburden the tongue.

O - A beer I am glad to have tried, and which I definitely enjoy. It is delicious, with bourbon sweet vanilla and bright wood. I do love the rich flavors and in particular the huge nose, and find the use of the barrel here to be an interesting contrast to the more common stout/bourbon combinations.

From: Sun King Brewery, Indianapolis, IN
Date: May 2015 release

A rather average bourbon barrel aged beer that's lost most of its original character to the bourbon barrel aging process. It's a fairly obvious bourbon bomb, but even the bourbon is a bit thin and watery here, like the brewers tried to avoid making it explosively bourbon-like, but ended up just diluting what was present instead. Little doppelbock character, mostly of residual malt sweetness that's always in the background. Definitely not worth the price, or the hype.

Pours a good-sized mass of dark beige to tan colored foam, average retention time, fading to a medium-sized ring around the perimeter of the glass. Lacing is minimal, with some small dots clinging to the sides of the glass. Body is a dark amber brown color, with light bringing out orange-brown hues. Carbonation visible through the transparent body.

Aroma of strong bourbon/bourbon oak barrel and a bit of caramel/brown sugar, vanilla, and light ethanol.

Beer is like sweet, diluted/watery bourbon with a bit of caramel/brown sugar, vanilla, oak barrel, and modest ethanol. As to be expected, the base beer is largely lost due to the barrel and lingering bourbon and alcohol. Front tastes bourbon, bourbon oak barrel, and syrupy malt sweetness with accents of dark caramel. Mid tastes continued bourbon, bourbon/oak barrel, modest ethanol, a bit of caramel/brown sugar maltiness, and hints of vanilla. Back of ethanol and oak barrel with bourbon notes, kind of flat/boring in that this is the predominant character, with the dark caramel and syrupy malt far in the background. Aftertaste of lingering ethanol spiciness and heat, malt sweetness (toasted bread, caramel, brown sugar syrup), some dried figs, and a bit of bourbon/bourbon barrel character.

Beer is medium to medium-light in body, oddly light for the style and that this has been barrel aged. Carbonation leading to a slightly more foamy than smooth (60% foam, medium to large-sized bubbles). Ethanol easily felt in the nostrils and as moderate burn on the tongue and throat. Closes dry, with medium stickiness on the palate and lips.

Smell - I would like to describe the nose as being booze forward. It is potent, but does not burn.

Taste - My initial impression is the bourbon notes are so smooth. Tobacco, caramel, vanilla, and dark fruits work well together. The pappy is so well balance with the beer. The booze is there, but it is not harsh or bitter. Only a modest burn exists in the aftertaste.

Mouthfeel - The barrel aging seeks to have caused some of the stickiness of the style to fade. It could easily be a brown ale.

Overall - This beer was worth seeking.

On tap at Apex. Very unique spicy caramel and oak nose. Same with the taste along with some coconut and light bourbon. A bit thin on the mouthfeel but otherwise awesome.

This one pours a slightly amber brown with minimal head. The beer is slick in the glass and slightly coats from the barrel I can assume. The smell is huge bourbon. It smells like a glass of bourbon. I pick up nothing else but booze. The taste is more of the same. You better really like bourbon. It's not necessarily hot like the nose suggests, but I'm only getting booze. It's very one note. The body is appropriate to style but does not help the beer in this instance. I was very excited to try this, but it was not for me. A few others at the bottle share enjoyed the booziness of it more than I.

Seeing as how all of the Pappy Van Winkle under the Sun got stolen, that fact makes this beer all the more amazing and special.

The aroma is fantastic. You have to realize that you're smelling a dopplebock base beer and not a stout, and once you do that it makes it easier to appreciate. The lager yeast is definitely apparent, but the bourbon takes center stage. Molasses, vanilla, oak, bourbon and light dark fruit make this beer an absolute treat to smell. I can't get enough.

Flavor is the same. Again, realize it's not a bourbon stout and it makes it a one of a kind experience. So much different from anything else I have ever had. Honestly, this beer was delicious and I had no problem drinking the entire can myself. Same exact characteristics as the nose, but with a little more caramel and brown sugar present on the palate.

For a beer that took home gold at GABF, it lived up to hype and was DEFINTIELY worth trading to acquire. Thank god I have another can to drink!

Afternoon Delight from Sun King Brewing Company
Beer rating: 93 out of 100 with 118 ratings