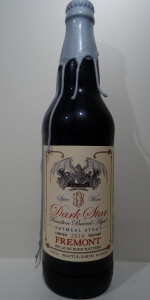 Appearance is sort of a light cola black with a tall mocha foam settling to a tan collar.

This exhibits all kinds of ginger right up front, and having this outside in the middle of summer, it's a big no from me. I mean...in concert with the Big Red sort of cinnamon flavor I'm getting, there's even an evergreen note to it all.

The soft frothy medium body does survive on to add a decent milk chocolate and cocoa character before the semi-dry finish. It has some heat and a little metallic, nutty barrel, and while that's not bad, it's a bit weird.

It's just too damn Christmasy for me, and I wasn't coming into it expecting that. I was thinking this would be Fremont's version of barrel aged Huna, which sounded fucking awesome in my head. Damn.

Okay, so this is weird. I wish I had notated the vintage of the bottle I'd reviewed above, because having a 2018 bottle just before Christmas of 2020, I'm far more pleased with the experience.

Again appearance is a dark coffee black with a short but creamy tan head settling to a ridged ring.

It seems much less heavy-handed with the Christmas spice now than last I had it. It's quite mild and more drinkable on that front, while the barrel maintains a very pleasantly dominant presence, featuring a good char with a whiskey bite and some milky oak. The malt is a bit chocolatey, but not too much, also featuring notes of caramel and nuts, all in fine balance with nothing obtrusive.

The medium body is slick but then its soft froth cuts to a sharp tingly crisp carbonation that has a semi-dry sting.

There's a bit more cinnamon this time, and much less ginger, nutmeg, allspice or whatever else they put in this. I can't help but completely blow away my previous rating and up this by quite a lot.

22oz wax-encrusted bottle purchased at Huckleberry’s for $17.49. This is officially the most expensive bottle of beer I’ve ever purchased.

Poured into a St. Bernardus goblet, this was a gloriously viscous-looking shade of darkness that denied light any point of entry, with a big, creamy and sudsy mocha-colored head. Said head dropped rather quickly, leaving snatches of foam on the sides of the glass.

Wonderful aroma. Oaky barrel smells, some boozy bourbon scents, roasty and sweet notes, and even some red wine scents. Surprisingly, the spices don’t seem to stand out, they give off just a sense that they are there.

The spices are more obvious in the taste, which they enhance rather than dominate. They balance themselves with the opening blast of bourbon and roasted malts. No one spice seems to stand out more than any other (for the record it’s cinnamon, nutmeg, allspice, ginger, vanilla and clove) and they perform a service rather like a nice picture frame does for
a painting. Without the spices, this would still be an outstanding barrel-aged stout, but their presence adds an extra sheen to the experience. The flavors imparted by the bourbon-barrels hovers in the background, like a warm, soft blanket of booze. Hops don’t stand out much – there’s just too much else going on – but they become a little more obvious at the swallow, which ends on a sharp zap.

What a beer! I was intimidated by the price for a long time, and finally made the plunge this morning, and was a little bummed out the coffee version of KDS was sold out. Never mind, Spice Wars makes up for any disappointment I momentarily felt. I could drink this all day, and I’d be thoroughly drunk, but it would be worth it. This might be the best beer I’ve had – hyperbole written in its boozy glow, yes, but this backs it up.

Smell - Lots of bourbon. Quite boozy. Spicy. Cinnamon and nutmeg and such.

Overall - Flavorful, but it's boozy as hell and a little tough to drink.

Poured into a Fremont small snifter. Poured into a Fremont small snifter. Pours pitch black, opaque in the glass with a fine, half finger light brown head with great retention and lacing. Great aroma of sweet dark toasted malt, bourbon and piney seasonal spicing, with an odd woody note like fresh allspice. Flavor is rich dark toasted malt, chocolate, bourbon, winter holiday spicing of cinnamon, allspice, ginger. Finishes with bourbony sweet dark malt, dark chocolate, slight dark dried fruit and lightly lingering spices. Great creamy body and mouth feel. I expect the best from Fremont and this still pushed the envelope. Admittedly I'm a sucker for bourbon stouts, but this really has everything, great malt, bourbon, excellent mouth feel and the spices are complex and interesting but very deftly used, they sit in the background and enhance the rest. Possibly my favorite Fremont brew to date. Really nicely done.

Smell. A good amount of cloves (fuck) and some cinnamon, sweet vanilla and bourbon, chocolate and a touch of molasses and dark malt coming through. Was REALLY hoping the cloves wouldn't be overdone but they really come through here. Very fresh bottle though so there's still hope. Nice besides that.

Taste. Sweet dark chocolate and smooth bourbon, cloves for sure but not as pronounced as the smell, caramel, a little cinnamon and nutmeg ...right about the perfect level for these. A little molasses and a bit of dark roasty malt.

Mouthfeel. On the low side of full bodied, Low+ smooth carbonation.

Overall. Okay, I admit I hate cloves. They suck and so do you if you like them. Like raw onions, this spice is way overused and rarely in a complementary way. This isn't an extreme example or anything, but If the cloves were backed off a notch we'd really be in business here. Good stuff, maybe some age will mellow things out a bit.

Split between two snifters - 2014 edition (the only one)

Color is dark brown with a thin mocha head. Good lacing. Smell is cinnamon, cloves, nutmeg and roasted malt with a bit of bourbon. Flavor is dominated by the spice blend, but somehow it works. The underlying bourbon and roasted malt are just present enough to provide complexity and to prevent the spice blend from being overpowering. Mouthfeel is very nice - smooth and creamy. Overall, a very good BBA stout.

Best part about it is the thick mouthfeel and spice combination. It’s the perfect Christmas beer to me. Sometimes these spiced stouts can overdo it but I think they hit the mark. I wonder what a fresh bottle would taste like though. It could use more barrel character but I love the barrel forward stouts more than most. Glad I could have this bottle!

Still got some definite alcohol, but also beautiful molasses and chocolate and delicate folds of roast and vanilla and nutmeg and cloves.

So creamy and complex and delicious. At once smoothe as a dream and effervescent as a late night celebration. The alcohol gives it a level of heat almost like peppers on the back end that ensures it stays a sipper and lets me prolong the experience.
Flavours of creamy coconut and chocolate and bourbon and nutmeg and molasses and all the other promises...

This is incredible. I remembered a stronger spice presence fresh, which doesn't surprise me, and I wish I had grabbed a couple more (in general, but also specifically) so that I might continue to see how it evolves and grows. I can only imagine what another couple of years would do to make this velvety deliciousness even more accessible, toning down the heat a few degrees still and bolstering the depth and smoothe complexity.

Or maybe I'm just talking out of my ass. But either way, in no way do I regret making this my birthday brew.

Nose has bourbon, vanilla and chocolate as it's most notable calling cards to start with a little molasses tying it together.

Initial taste is reminiscent of egg nog of all things! Actually, that's high praise from me since I do love egg nog, but what I think I am getting is the interplay between the bourbon and spices. Once I convince myself that it isn't egg nog, I start to notice mostly whiskey. Finish is a touch hot but whether it's the heat from the alcohol or the subtle spice, I can't discern but the extreme dryness on the finish is voting for alcohol.

It feels so incredibly creamy. Medium bodied and silky with just a bit of tingling on the finish.

Very nice beer to say the least. Not on overwhelming bourbon bomb like a KBS or BCBS, but far more depth for its age that doesn't overwhelm the subtle characteristics.