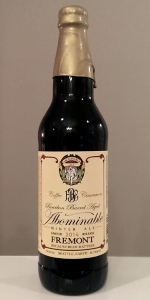 Alright, time for the highest rated American Strong Ale, which is quite the ambiguous style, but I’m excited regardless. Especially after having The Rusty Nail and knowing they excel at using cinnamon as an adjunct, I can’t wait to try this. Let’s get into it

This is super cinnamon forward in the nose, almost too much but it’s still nice. I’m picking up on aromas of earthy cinnamon, cocoa powder, sweetened coffee, spicy whiskey, and toasted oak

It’s a bit more balanced in taste, and very good, but I was expecting this to pop more. On the front end of the sip I’m tasting milk chocolate, toasted oak, earthy cinnamon, raisin, earthy whiskey, brown sugar, and toffee. The swallow brings notes of earthy cinnamon, sweetened coffee, milk chocolate, toasted oak, caramel, and bourbon. Gets better as it warms but I wanted more complexity out if it

A medium full body pairs with moderate carbonation, resulting in a lush yet zippy beer. Finishes dry for everything going on and drinks well below the 13% listed

Given the fact that it improves over the course of drinking it, I have to bump this one up a bit in the overall. Still not everything I was hoping for but very good

2022 version on draft.
Very solid offering.
Balanced + creamy for the amount of booze and adjuncts it has.
Still could only stomach 6oz worth.

2017 limited release Coffee Cinnamon Barrel Aged B-Bomb, imperial winter ale. Aged (4 years? or nearly 5?) in my cellar and served chilled in a Chimay chalice. Oil slick appearance and a big warm cinnamon nose that fills the room. Really that aroma is hard to beat. Flavor is creamy and mouth-encompassing with waves of caramel, cinnamon candy. Ultra-fine carbonation adds milkiness to the mouthfeel. Mocha and coffee flavors are initially mellowed but there's a more pronounced coffee bitterness in the aftertaste. Vanilla flavors from the bourbon are also mellow, and I don't get any harsh whisky flavor at all. Pretty amazing for 13.0% ABV. World-Class absolutely describes it. I don't believe I've ever had this fresh, but I have no regrets about aging it this long.

Pours out a dark brown, nearly black liquid. Aggressive pour yields a half of a finger of khaki head. The foam sticks around for a while. It didn't look too thick on the way into the glass. Stouts just have a certain way of looking and you can guess that this might not be one.

Nose indicates that it's definitely not a stout. Coffee comes forward first, but not in your face with roasty qualities. There's actually a slight hint of sweet fruitiness that accompanies this coffee. Reminds me of Jamaican Blue with its delicate, fruit-forward tones. Next is the presence of molasses spice cookie. There's this mildly bitter, peppery, spicy sort of thing lurking underneath. It smells quite captivating so far, if a little on the weak side.

Taste is everything that was in the nose and more. A natural evolution. Mildly roasty and fruity coffee, cinnamon, bitter black strap molasses, a faint bourbon/oak, black pepper, but without the heat, and dark grainy bread. Along the lines of rye or pumpernickel. I got that in the previous B-Bomb I had as well. Very unique quality. These flavors unravel spectacularly, never once stepping over each others toes or vying for attention. Nicely balanced, not too bitter, not sickly sweet.

Mouthfeel is fullbodied and smooth. Not thick like a stout, but a nice density. Not too cloying, alcohol evaporation drying it up a little. Mild carbonation.

Overall a fantastic brew for the winter. A great sipper to have with friends and to ponder life and enjoy a snowy winter landscape. Cheers to Fremont who continuously knocks it out of the park.

2019 version, aged at Fremont purchased through Tavour. My second version of B-bomb, but I haven't had the base beer yet.

This is well rounded and wonderfully balanced overall. The barrel presence is magnificent, no surprise from Fremont, rich with bourbon and mellow vanilla with hints of oaky leather. I want my funeral pyre built with spent staves from Fremont barrels.

Under all that was creamy cocoa, dates and raisins, caramel, subtle coffee, and dessert like cinnamon. This is wonderful as is, but I hope I get to try a fresh bottle someday with more assertive coffee notes.

Now having 2018, aged and purchased under the same circumstances. This version was a few bucks cheaper for some reason. This was drier and a bit roastier. Less cinnamon and surprisingly more coffee maybe. Just a bit less decadent than the 2019.

Edit 4/1/22 got my wish, now enjoying a fresh 2022 bottle. The coffee is more assertive but so is the cinnamon. I'm also getting a strong coconut note. Huge barrel presence but the figs , cocoa, and raisins are subdued. It's wonderful now, but I think I'll age the other for a year or so.

Pours a dark brown with tan head. Coffee, cinnamon, a little pepper on the nose. Tons of chocolate, some faded coffee notes, and cinnamon spice. There is a light heat from the bourbon barrels. It's so smooth, quite thick in its mouthfeel. In spite of the ABV and the weight of this beer, it's still a beer you want to keep sipping on.

A: The beer is jet black in color. It poured with a quarter finger high dark tan head that has excellent retention properties and hardly died down.
S: Light to moderate aromas of bourbon, coffee and cinnamon are present in the nose, the latter of which becomes stronger as the beer warms up.
T: The taste follows the smell and has additional notes of vanilla from the bourbon barrel aging. No alcohol is perceptible.
M: It feels medium- to full-bodied and smooth on the palate with a moderate amount of carbonation. The cinnamon lends hints of heat in the finish.
O: This beer does a very good job at balancing all of the flavors together and is exceptionally easy to drink considering its strength.

L -- Black with a small khaki-hued head produced with moderate pour. Minimal retention and some lacing
S -- Cinnamon, smokey oak, caramel, dark chocolate, bourbon, herbal bitters, hint of ground coffee
T -- Despite the two years of aging on this one, the coffee and cinnamon character are both there and round out the soft bourbon barrel notes very nicely. No angles are too harsh here. Also getting dark chocolate, vanilla nougat, herbal hop
F -- Medium+ mouthfeel, medium- carb. Not overly boozy or bitter
O -- The aging did wonders with this

Poured from a bottle (2017 vintage) into a small tasting glass

L: pours a nice very dark black brown with a moderate tan khaki head. Fades after a minute or so, leaves a nice ring of foam around the edge when it does

S: nice and inviting nose, full without coming across heavy or sweet. Great chocolate aroma to open, solid roast coffee comes through as well. There’s a bit of cinnamon spice coming through as well, adds some nice complexity but doesn’t become a dominant note. A bit more cinnamon as it’s warmed, along with a small bit of abv heat

T: follows the nose well, a great dark chocolate note with dark roast coffee notes shining as well. That cinnamon comes through to add some nice depth, but again more playing a supporting role than really acting as a main flavor. This was as it was cold from the fridge - as it’s warmed that cinnamon comes through more, still not aggressive but a nice addition to the chocolate. Medium-long finish, with a nice bitter coffee/dark chocolate coming through. Abv works very well, provides that warming character without coming across hot

F: medium body, medium carbonation, would have liked it a bit thicker but not sure if that’s me thinking stout vs. winter warmer (what is the appropriate body for the style?)

O: a really nice winter warmer (not that I’ve had many in the style). Solid nose, great flavor - some age in the bottle has muted the adjuncts but I’d say they still come through well

S: cinnamon and lots of it. Bit of sugary caramel from the barrel.

T: wow! Again, loads of cinnamon both in flavor and in heat. I don't taste the coconut so much as feel it, it adds a lot of richness to the brew and leaves an oily, coconutty film after every sip. Bourbon barrel adds a lot of sweetness which balances everything out.

O: this is one hell of a winter warmer. The typical flavors are complimented and enhanced with the additions. This is an incredibly rich and sweet dessert beer, make no mistake. Startlingly good beer, one of the best I've had in a long while

2017 vintage consumed in early 2021. Dark brown/black pour, not much head. Three and a half years down the road from brewing, the coffee flavor is almost undetectable. Cinnamon dances with oak and bourbon flavors to provide nice complexity. As the beer warms, the bourbon flavoring increases, overwhelming nuance, but that's quibbling. This is a world-class effort!

A - Pours a very dark brown with a one finger creamy tan head. Nice amount of soapy lacing.

O - This is impressive. The cinnamon and coffee don’t overpower the base beer. Mouthfeel is supreme. Great beer.