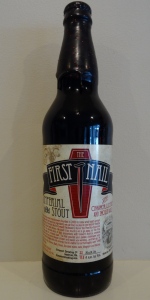 Poured into a Fremont small snifter. A 2015, properly cellared bottle. Pours a very dark mahogany brown, appearing opaque black in the glass with a somewhat fizzy, thin brown head that dissipates to patches with light lacing. Aroma of dark toasted malt, cinnamon and licorice, a hint of cocoa. Flavor is semi-sweet dark toasted malt, cinnamon, light cherry, licorice, milk and dark chocolate. Nice lingering cherry, licorice and cinnamon. Medium bodied with light to moderate creaminess and good mouth feel. Well, I was planning to drink a Rusty Nail tonight from one or two years ago as my 2018 bottle heads to the cellar. I grabbed this and poured before realizing that despite the nearly identical graphics, this is the base stout, The First Nail. This is one of those mistakes that it is impossible to regret. With three years on it, this was due for drinking anyway, and it has aged very nicely. The cinnamon is the dominant flavor, but not really forward; chocolate, cinnamon, licorice and a light cherry note are all well balanced and integrated. This stout is so complete and flavorful, it's almost odd anyone thought it should be further aged, until I remember that this could have some bourbon on top and I'm looking forward to my Rusty Nail in the future. Fremont really has mastered the barreled stouts and strong ales and this is one of fine creations. Excellent.

Catch up rating from last night. First in a line of many imperial stouts. Color and pour normal, silky smooth body, up front ABV and following burn. Body right on for an oatmeal stout.

Very dark appearance with slight tan head. Aroma is a molasses sweet. Taste is a rich lightly sweet molasses without any hint of alcohol or bitterness.

4.5 A: Black color. One and a half fingers of frothy/creamy light brown head. Retention is impressive for a beer this massive and a short ring of lacing is left.

4.5 S: The nose is wonderful. Deep and welcoming. I won't even start with what's there because what isn't there is even more amazing. This has absolutely no booziness to it. That said, it has everything I want too. Rich caramel and molasses under a roast laden base. Next is the licorice. The smoke is present enough to know it's there, but only acts in a complementary role. The cinnamon rounds it out to give it a nice spicy kick. Sweet overall with a powerful neutral maltiness.

4.25 T: There is some booze in the taste, but it seems more in line with 7 or 8% and not 11.5%. Rich and spicy, more so than the nose. The smokiness meshes flawlessly with the caramel and molasses. Notes of semi-sweet chocolate, licorice, and roasted barley fill in underneath. Again the cinnamon adds a spiciness that enhances the subtle warming on the finish.

4.25 M: Heavy body. I usually love a rich, velvety body like this, but it's a bit too cloying, causing amylase globs to form in the mouth. Otherwise, good moderate carbonation and plenty of creaminess.

4.5 D: This is one hell of a brewery and they seem to have the big beers down. While I like some of their other beers better, this one is perfect for a cold wintry night.

(This was enjoyed release day July 9, 2016) On Draft at the brewery

Appearance: Deep dark with no head and no transparency.

Nose: smell is full of dark fruits, licorice, and cinnamon.

Taste: follows the nose heavy with licorice, toffee, some coffee and figs. cinnamon becomes more prevalent at it warms.

Mouthfeel: No carbonation, oil like viscosity and smooth as velvet.

Overall: This beer is deliciously deep and dark. this is surprisingly better than I had anticipated.

Like woemad, I picked up this gem at my local Albertonson's - bottled 2/10/15. Thanks whoever aged this for me. Look - dark, brownish black with tan head. Smell - to me the licorice really stands out. Slight cinnamon. Taste - chocolate, molasses, licorice, then the cinnamon really kicks in. Feel - thick, rich, and creamy. Overall - love this beer. I wish I came across this beer last February because it would be interesting to see how this beer drinks fresh vs. some age.

22oz waxed bottle purchased about a month ago at Albertson’s in Kennewick, WA, for $9.99. According to the stamp on the neck, this was bottled at 9:10 AM on February 10, 2015. Why is this not available in any bottle shop I went into for the last year and a half, then suddenly popping up in a corporate grocery store in south-central Washington?

Poured into a River City snifter, this is the color of syrupy despair, with a dark, mocha colored head that dropped quickly, leaving spotty lace.

The nose was initially of bitter, smoked malts. As it warmed, the cinnamon and licorice could be detected as well, even though I expected it to have mellowed away over the last 1 ½ years. Neither of these latter aspects are in the same league as the smoked malt aroma, which is closer to something along the lines of soy sauce than say, bacon or smoked salmon. There are also traces of a chocolate-like aroma and a bit of coffeeish roastiness.

A combination of sweet, mollassesy and bitter, smoky maltiness hits the tastebuds first. Midway through comes the spicy cinnamon notes, with licorice riding along as more of an aftertaste than anything else. Licorice-phobes will be relieved to hear it’s a pretty mild, mellow flavor, rather than the big, black licorice blast of something like Ouzo or Sambucca (though I personally happen to enjoy those, especially Ouzo). Along the way are minor flavors of chocolate, coffee, raisins, even a bit of pipe tobacco. Mildly bitter at the finish. While there was some discernable alcohol flavor, it's nowhere near what could be expected from a beer clocking in at 11.5 % abv.

Creamy, velvety mouthfeel to this, like a thin milkshake.

I had my doubts about what this would be like at it’s age, but it’s great stuff. I can’t help but wonder if a fresher bottle might have been brash by comparison. I will certainly pounce on one if I should happen to find one, you know, for science. Between this and the two bombers from Trickster I found at the same time, I think I’ll be hitting the beer section at that particular Albertson’s regularly whenever I’m visiting my folks.

Drank with 14 months of age on bottle. Kind of a funky beer. Lots of sweetness at first. Still present, but faded as beer was drank. Cinnamon flavor is very pronounced as well. Very good ,though a bit funky. Had a weird maple flavor maybe? Different.

Easily one of the best beers I've ever had. Fremont knocks it out of the park with everything I try from them... They can't make a bad beer... Deep, dark, boozy, loaded with licorice and smokiness, just absolutely delicious... Rich and creamy... This beer is just stupid good... Can't say that I get any Cinnamon but who cares? It's over the top good... Delicious... A sipper...boozy... Loaded with dangerous delicious flavors...