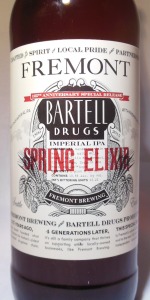 I had this on tap at the brewery. Rich looking body that is deep amber and orange in color. It is a juicy, grapefruit drink with the perfect body, and suggested amount of carbonation. Tropical fruit, grapefruit and orange juiciness combined excellently with smooth hoppiness. Easy drinking, I wish this was produced regularly. Very nice spring beer.

22oz bomber included as an “extra” by beertunes in a box of Bellingham beers. Super stoked to try this. The label lists the hops and malts, and that fact that it has 93.25 IBUs. 93.25? That might be the most specific IBU amount I’ve ever heard. According to the stamp on the neck, this was bottled on Valentine’s Day, 2015.

Poured into an Iron Goat snifter, this was a hazy, honey-gold color, with a massive, beige-colored head that dropped after a couple minutes down into an uneven mass of bubbles. I was surprised by the size of the head, given the alcohol strength, and not so surprised it fell fairly quickly for the same reason. Eventually there was a bubbly and foamy skiff over precisely one-half of the beer – never seen that before. Lots of spotty and streaky lace.

Big, big citrusy hop nose to this. Pineapple and grapefruit were the dominant scents.

The citrusy-ness carries over to the taste, but it’s not overdone the way some überfruity Imperial IPAs are. Just after the sweet tropical fruit aspects hit the tastebuds some spicy bitter notes follow. The bitterness is less powerful than the fruitiness but is at just the right level to keep that fruitiness at an appropriate level. Very drinkable for a beer of this type and strength.

Medium bodied, with a mouthfeel that manages to be both resiny and crisp.

If you live near a Bartell’s (I’m about 300 or so miles from one) and haven’t had this yet, stop at nothing to get one! This is a ridiculously dangerously drinkable beer for the style and strength. This may just have become my favorite IIPA (IIIIPA?) of the fruity variety, and is a contender for favorite IPA (it’d take me forever to figure out the latter, I’ve had so many, but, clearly, this is already in the conversation). HUGE thank you to beertunes for sending me this!

What a lovely DIPA. This isn't a hop bomb, and it's not bitter. There's a place for in your face hop bombs, of course, but there's also a place for fruity, malty, highly drinkable DIPAs, and that's exactly what this is. Great citrus flavors. Exceptionally smooth, exceptionally drinkable.

Had this on tap at The Pine Box.

Poured from a bomber into a pint glass.

S: A nice citrus smell with a small bit of hop scent behind it.

T: Somewhat underwhelming. I prefer big in your face hop bombs and this isn't one. It has a fairly nice taste, quite a bit of citrus. There was something else that tasted almost medicinal (maybe that was intentional based on what this is, but I felt like it took away from the overall experience.).

O: A good but not great Imperial IPA.

the smell is a nice mix of tropical fruits and piney notes. i get a good amount of pineapple.

the taste is nice and smooth. similar to the smell in a lot of ways but not quite as pronounced (why i gave it a 4.25 compared to everything else at 4.5) - for a 10.5% beer the taste is incredibly balanced though.

the feel is great, strong carbonation. a little tingle on the tongue and slight warming on the back end from the high ABV but in a very balanced and non-boozy way.

overall an amazing beer. fremont is killing it right now and it is cool to see a brewery put their best effort into a promotional beer like this...given bartells place in the community they deserve a great beer and as expected fremont delivered. oh, and it was $3.99 at bartells...amazing...maybe BA should add a rating metric related to affordability because this beer would rank #1 overall all time for me if that were a factor.

Taste follows nose. A big burst of acidic citrus washes across the palate. Plenty of pale neutral malt holds it all together, but the hops take center stage. Juicy with tons of lively alpha acids and a clean, bitter finish. Reminds me a little bit of an imperial version of Workhorse.

Mouthfeel is balanced and medium-bodied, could have easily been a lot heavier and thicker at this ABV under less capable hands.

Overall a really outstanding triple IPA, I don't think it's too far off from the recent Triple Trifecta. Dangerously drinkable.

Crisp clear golden hue with a finger and a half of that pillowy white head that evokes cumulus memories of summer and lacy window curtains. Gorgeous.

Nose starts out grainy/grassy before parting ways to let a papaya and rounded lemon, pineapple continues to emerge as it warms, and almost a peppery kick.

Starts out decidedly committed to the sweeter fruitier side of IPAs, which I love. Mango and papaya and guava maybe even. Pineapple comes through and then that same peppery kick as it transitions into the pine and pith type of finish. Man. There's an interesting almost earthy/meaty hump rising behind the trees that never fully pops. Finish is long and bitter. Smoothe and drinkable medium body that belies the alcohol found therein. I would never have guessed .5, and I could see EASILY drinking more of this than I would later appreciate.

Poured into a Fremont pint glass. Pours a medium golden amber with a fine half finger white head with great retention and lots of lacing. Aroma dominated by tropical fruit; pineapple and mango, light lemon citrus hops, caramel malt. Flavor is lemon and grapefruit citrus, mango and mysterious tropical fruit; starts very mellow and fruit forward then develops somewhat resinous citrus and pine hops with citrus rind and hints of pine and dankness. Medium bodied with peppery carbonation. This is really is appropriate for a spring ale, light and refreshing. The fruit is complex and well balanced and the sneaky hop bitterness finishes it off nicely. Frighteningly well covered ABV, I would have guessed much lower from the taste and while sampling for this review, I drank it much more quickly than I expected because of the interesting hop fruit component; soon realized it packs a punch. Pleasant and deceptively light and bright. Really different than a typical herbal NW imperial IPA, but perfectly fits the name. Bartell's got a winner with this one. My Bartell's has a very small (one shelf of bombers) craft and macro cooler with some fairly safe, decent craft and crafty beers. I hope this opens the door for folks buying the staple ones. At 5.99, this is the bargain of the year.

For me, at least, this drinks almost like a pale ale--a major compliment for a beer of this size. It's remarkably light and delicate, and redolent of grapefruit, kiwi, and lemon...The name "Spring Elixir" is apt, and not just because this beer was released in March to honor a local apothecary: it's bright, blooming, and tasty medicine.