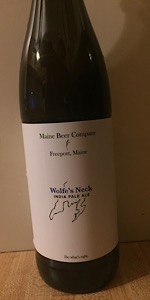 Notes: A gift to the people of Maine and its visitors, Wolfe's Neck reminds us of the importance of protecting land for future generations to experience and enjoy.

"We've dropped a pebble, now we have to see where the ripples go."
-Eleanor Houston Smith

Clean drinking and well balanced though its hop profile leans a bit too much on a tired New World tropical flavour for my taste. Citrus, nectarine, fruity hop flavours. No blueberry from the Mosaic, unfortunately. What I do dig is the citrus from the El Dorado. Certainly a juicy brew, but I think the Sabro is hurting not helping...I'd imagine this would be better with just an El Dorado & Mosaic focus.

A: Pours with a touch of haze, a golden/orange color. With a finger worth of white head forms, excellent retention and rings of lace left behind.
S: Oh, big ripe melon and fruity hops. Going from berries, to peach, lemon and orange rind. Seems like a fruit salad, but it all mingles perfectly to make that modern American IPA profile pop.
T: Like the nose, all that berry, melon and peach. Orange rind with a bit of peppery zesty character. Becomes a little sticky sweet, and some definite caramelized sugars going on in there. Though a nice bitterness brings it all back together
M/O: A medium to full body. Its a bit sticky and resiny, but not bad in that department. Well carbonated, but not the effervescent explosion Maine can sometimes be. Though it all works well, and something I really enjoy.

Yeah, a quality IPA and that is not in any way surprising from this brewery. The sticky, resin like sweetness isn't really a detriment but keeps it from being among their better IPA's IMO. Though saying that, it is still very highly recommended as always.

Look: Pours a beautiful light orange / golden color. There was a slightly rocky, fluffy white head of about a finger thick. The head has reduced to a thin layer and leaves behind a taller crest of meringue-like fluffiness along the rim. This is nearly clear beer as it has just a slight chill haze. After pouring the bottle of the bottle with its sediment, it looks more like a hazy juice-bomb IPA with a bright orange translucent color.

Smell: The aromas are very nice: ripe tropical fruit including passion fruit, mango, guava, and coconut. This could be coming along with the coconut note - this beer has a nice creamy vanilla note to it. There is some green bell pepper and other green notes on the finish. Some woody and piney notes as well.

Taste: This is a very refreshing West Coast new-school style IPA. The flavors are mirrored from the nose, perhaps the tropical fruit and vanilla aromas are less prevalent on the palate, with some added citrus components. There is a nice orange peel flavor. The beer finishes quite dry and crisp, with a moderate bitterness of that lingers for a bit with pithy orange and piney, woody, and slightly sweet coconut notes. The flavor improved and became much fuller and juicier after pouring the bottle of the bottle.

Feel: The body is medium; it's very drinkable and nicely carbonated and has a relatively soft mouthfeel to it.

Overall: It's tasty. It was like I was drinking two different beers between the top half of the bottle without the haze and the bottom half of the bottle with the haze. I would buy this again, and when I do I would pour the entire bottle at once because the sediment really improved the flavor, juiciness, and body of the beer.

Pours medium-hazy orange with a finger of white head.

The taste is orange, peach, doughy bread, and mellow bitterness. Subtle floral notes and minerality, and hints of berry.

The mouthfeel is light to medium for the style.

Generally, a fine and tasty India pale ale. It distinguishes itself more with its hop bitterness than anything else.

T: orange juice, sweet grapefruit, and a generic citrus sweetness. Pineapple, sweet resin. Some caramel and slight pine. A touch of grass as well. Finish is crackery with a little malt punch

M: smooth, lighter side of medium with medium carbonation

Pours a mildly cloudy orange color. Thick frothy white head forms on the beer and then starts to dissipate leaving a layer of foam on top of the beer.

Taste follows the nose with notes of apricots, ripe stone fruit, orange peel, a light honey like sweetness, mild grassy/piney bitterness on the back end.

Feel is medium bodied, a bit thicker and slick, prickly carbonation. Drier on the finish.

First beer this month!
Moderate to vigorous pour yields a one inch white head over a golden orange body with some sticky lacing. Nose of tropical fruit, floral, slight citrus, and even slighter pine. Taste is sweet tropical fruit with citrus and finishing with a slight citrus pith while having a pleasant, earthy bitterness. Nice feel, very smooth and well balanced. I'd have another and would definitely recommend to everyone.
I could crush a few pints of this for sure!
Cheers!

As with other Maine beers, this one does not overpower you with strong aromas and tastes. It is subtle, well balanced, no lingering aftertastes, and the right ABV. I finished it and thought “mmmm, that was good”!

My first impression of this product is that it's a nearly perfect beer. Born on date of 3/2/2021, it's within the 90 day expectation. It hits smooth for the style and is stunningly well balanced. I enjoyed how it hit my palate and I enjoyed lingering flavors. The malt and the hops are both present and lovely. Happy.

Great golden hue with a thick lacing and light head on top.
More floral than citrus but a great light aroma.
Easy drinking hop-forward flavor with a great wild grass taste that changes with every sip.
Really smooth and easy to drink. Looking forward to the next glass.
Great IPA!

Very clean and well crafted, but just a bit weak in the flavor department.

Delicious hoppy beer that looks and smells like a true IPA. Tastes like a new beer with every sip, just a lot of depth here. The subtle fruit is balanced well with hoppy bitterness. Another great get from MBC

A gentle IPA. Clear golden pour with a solid cap of foam that laces nicely. The flavor profile is very mild--modest IBU--with tropical and citrus, and without aggression. Light-bodied beer that seems like a spring-summer natural, though my tasting was in January. Not as flavorful as some of Maine's other IPAs, but eminently pleasant.

Another solid offering from Maine...

Reminds me of an old school IPA from 10 years ago...

Nice touches of bitterness...the bottle was a little older than I would've liked but it still maintains a solid IPA character..

Lunch still reigns as their go to IPA but this is nice as well...I'm not a huge fan of their format and the price point that goes along with it...as a sixer I would have no issue paying $10-12 for this but at $7.99 per bottle it needs to be upper echelon...

Picked-up a single bottle at Bradford's in Plymouth for about seven dollars. My fifth brew reviewed from these guys. This was very good, dinged for price point & MBC's ridiculous single-bottle distribution (I only buy when returning lots of empties, & I have other beers @ home).

Pours a pale orange. Excellent bright white pillowy head retention. Tangerine and tropical gummy worms on the nose. This just tastes like a Maine Beer Company offering in that presented in an elegant way. It's light and not at all aggressive. It's tropical citrus up front - I get orange pez (without the pez texture), starfruit, and a little pineapple that evolves into a bitter black licorice, anise note that doesn't really get into the bad characteristics of black licorice and anise. It's minty mentholy. It's got chewy malt character that isn't heavy in like a Port Brewing way. It's still characteristically MBC in every way, which shows that MBC can use these new school hops in a way that is tame, complex, elegant, and drinkable.

Hoppy aroma with a hint of citrus.

On tasting, a nice hoppy bitterness resting on a firm malt bed. A little orange and grapefruit. Also a touch dry.

L: Poured from a bottle to a pint glass. Had an amber / yellow color and a slightly hazy consistency. There was a half inch of foamy, fairly long-lasting head. Very good lacing.

T: Tasted of a bit of malt (mostly in the finish; a solid backbone), a decent bit of citrus fruit (orange and lemon, in particular), some pine (just enough to make things interesting), a little of the bready quality (a subtle presence), a good shot of hops (the dominant force here). A solidly done, focused, and likable flavor. Pretty tasty stuff.

F: An average amount of carbonation with a dry, sharp finish. Medium-bodied.

O: A good old-fashioned, well made IPA. Worth a try.

Not a hazy APA or IPA. Nicely sharp and bitter but easy drinking with a bit of citrus and herbal hoppiness.

A - hazy orange yellow
S - spicy with some underlying sweet knock out rose/blossom.

Aromatic for sure. I get mango, tropical fruit, pineapple, resin, and a breadiness underneath it all.

Sweet then bright hoppy finish. Crisp. Clean. A nice beer all around.

Wolfe’s Neck from Maine Beer Company
Beer rating: 91 out of 100 with 128 ratings