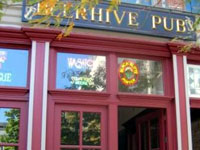 View: Place Reviews
Reviews: 19 | Ratings: 38 | Log in to view all ratings and sort
Reviews by dtivp:

This was my first visit to SLC and I had heard tales of the citiy being a beer waste land. After a nice dinner up the street i found the BeerHive in the center of town.
The bar had a small crowd, very nice atmosphere with a long bar with an ice tray to keep your beer cold. There was a nice selection of beer on tap and a four page beer menu with a nice selection of bottled beer. The range of prices went from $4 to $28. I was surprised with the number of 22oz bottle selections.
The two bartenders were vert friendly, talkative, provided excellent service and had very good beer knowledge.
I did not try the food, however, a few people that were eating seamed satisfied with their food.
Everyone in the bar seemed to be having a good time. This was a nice bar and recommend it to anyone visiting SLC.

Beerhive Pub is located in Downtown Salt Lake City on Main Street. There is a light rail line right in front for convenient transportation if you don't drive.

Upon entering, there's definitely a pub vibe. There were memorabilia on the wall, some games playing on large screens. They had a long bar with plenty of seating along with tables. Utah has an unique alcohol law in which beers from taps can't exceed 4%. I forgot about this when ordering beer from their menu which was quite extensive. I ordered a local Utah beer and was surprised when it came in a bottle with a glass (stout). Then I remembered their law, so I thought okay this makes sense. Beerhive did have a sliver of ice strip where you could place your glass and bottle to keep cold, so that was a plus.

Interesting place and city. I enjoyed my visit. Will return next time I'm in SLC.

Been there only once, and I did not care for it.

The best beer joint in Utah by my estimation.

This is my favorite place to grab a beer in downtown SLC good vibe and a huge beer selection. Pretty friendly staff for the most part. Enjoyed chatting beer with one of the bartenders last time I was there. Food okay, I believe it's made at a restaurant next to the Beerhive.

Can't punish the bar due to Utah restrictions. Actually more interesting to compare beers when all sre 4%. Bar is all about the beer, but the bar food is also excellent. Bartender on a quiet Sunday afternoon is very knowledgeable.

Of all the places in Utah, this is the best place to go to for a beer. There is also the Beer Bar and the Bayou, but the Beerhive wins. I find their beer selection better and a little cheaper than the latter two. This place has a very nice bar atmosphere while the other two seems to be trying too hard to be 'different.' When you're in SLC, stop here.

Great place. Awesome selection. Horrible service from the guy working while I was there. He seemed more focused on a small group of ladies than the rest of the entire bar. A young lady replaced him after I cashed out and asked my friend and I twice if we needed anything in the short time she was there. I will have to return and try this place again when the first bartender is not working.

A true diamond in the rough. I found 3 of the top 100 bottle in stock. I'll save the mystery of what they had. My only regret is I didn't find this place soon enough to try all of them. Service was on point and really knew their beers. I hope to travel here again.

Absolute must visit place. I came during the NCAA tourney and Utah was on. Place is just a celebration of local craft. Easily a dozen taps of 3.2oz beer and an impressive bottle selection. They have Abyss bottles! I went with Epic Big Bad Buddhist and was not disappointed. Food options are pub fare but pricing is extremely fair.

By far a highlight of my trip and I'd go back in a heartbeat.

Spent a few hours here one night while visiting SLC. Taps were all locals and of course 3.2% ABW/4.0% ABV. I had a few pints from the draft of random Utah breweries I had never heard of; they certainly represent the locals/Utah breweries in the draft selection which is something I like to see anywhere. The bar itself had an ice top which I had never seen before and thought was pretty interesting. The guy working the door was actually from the town where I lived during college. We had a short but nice conversation and overall the staff was welcoming and knowledgeable about the products they served. I think it was supposed to keep your drink cold but more likely it is just for show; pretty cool nonetheless. Fairly beer oriented here and the bottle list shows that. They had Black Butte XXI on bottle special for just over $20 which was rather awesome to me. Bottle markups where I come from are usually 75%-100% especially on one-offs. In a strange land for beer this place seemed like a great place for any craft beer enthusiast to stop.

I spent 10 days backpacking all over Utah and this was by far the best beer bar I encountered. It's also open on Sunday which is a rarity in downtown SLC.

They have a thin strip of frost along the bar to rest your beer one which is neat although gimmicky and it sounds like a nuisance to defrost and clean every night. It's a big place and I never had trouble finding an open stool.

The first time a I went I met a 1968 Vietnam vet who had chosen that day to jump off the wagon and tell me about diesel mechanics, bar fighting and his general worldview before picking up his empty laptop bag ("so no one figures me out") and moving on. He also bought me lunch and a beer. The second time I watched the Carolina Pittsburgh game while awaiting my flight and met a father and son from Russia. It's a diverse group of patrons.

The music was nice but unfocused. As soon as I got grooving' to mellow jazz Black Sabbath would roar in. I'd be feellin' Iommi's riffs then a funk band would come on. It was all good but jarring. I'm a music snob though.

All pints are $4 and I believe the majority of the tap list is all local UT 4% brews - 15 or so in all. If you want "heavy" beer they have a very large bottle list. Personally I'm a lightweight so I enjoy having a plethora of low abv beers to choose from. I ate a burger and it was fine.