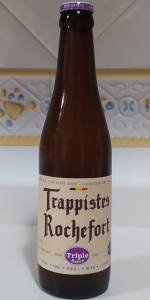 L: Foamy at first pour, later dissipates to a 1 finger thick white head. Agressive bubbles at the beginning, could conjure up a storm. Golden in colour, hazy, good lacing. Some sediment in the glass.

S: White bread, honey, a bit dusty. While colder get some strange notes of rhubab and redcurrant, which are not present while warm. Orange marmelade/peel, which transforms to an old dried orange peel. Some unusual butteriness. Pear.

T: Where's the butter creeping in from, can't be diacetyl, can it? Or maybe my brain can't distinguish butter from orange that well in a beer. White bread, bit orange, tiny tiny bit of pilsneresque quality when cold.

O: A different take on a triple which was a bit unexpected - was hoping more estery punch on the nose, but it was quite restrained compared to its Belgian cousins. Overall, an easy drinking companion, definitely worth a try.

Poured a 330ml bottle into a tulip. A massive four finger head that sticks around. lots of lacing.
Lots of fruit in the nose. Some pear. Mild spice.
A very mild hop finish.
Moderately light body and carbonation.
Very smooth and well balanced.

Appearance - Rich dark golden / yellow color with two gigantic fingers of head. Incredible staying power, as there's still more than a finger of head a few minutes later. Lots of sediment floating around, to the point of detracting the appearance slightly.

Taste - Light and bready, some booziness, lots of sweet little flavors of candi sugar, powdered doughnuts, then hints of peach and pear lurking in the background.

Mouthfeel - Medium light bodied, expressive carbonation and a fairly dry finish. Booziness felt in the back of the throat.

Overall - Rochefort doing a tripel and it's great? Color me (not) surprised. Awesome brew from one of the best in the world. Well worth a tipple and the price tag is even reasonable (at least around these parts).

long overdue with this one. maybe my most anticipated beer ever, not that i necessarily thought it would be amazing or anything, just that i’m so fond of the beers rochefort make (well, 6 less so but still) and that i was really stoked that they realised a new beer, and indeed it’s a good not great beer, decent triple, all the spices and sweet fruit flavours are in place, some hefe-esque banana notes, pineapple and apricot, pear, rather floral, white bread, honey, medium bodied and with high carbonation, pretty dry, just lacking a bit in depth of flavour, still a really cool thing to be able to try.

Poured into a small stemmed tulip. Lots of sediment when I got to the bottom.

A nice beer. Tasty, but there are better tripels being brewed.

A - Pours golden yellow, cloudy (did I kick up some sediment during the pour?) with a thick dense moosey white three finger head. Great carbonation.

T - Some herbal hoppiness, no sweetness or spiciness. Almost Pilsner-like. The 8.1% ABV is barely noticeable.

Bottle from John’s poured into stein at home. Wait, haven’t had this yet? Enormous head billows. Sediment at bottom. Yep, great tripel flavor.

Pours a cloudy, golden amber coloration with a large, fluffy head. Smells of biscuity, caramel malt, fruity, slightly spicy esters and floral hops, with just a hint of citrus coming through as well. Taste is an excellent balance of biscuity, caramel malt, fruity and spicy esters, with notes of apricot and clove, floral, slighty citrussy hops, with hints of orange rind, as well as a rich toffee presence. Finishes with a toffee sweetness and hints of bitterness, with some fruity and spicy esters lingering in the aftertaste. Smooth mouthfeel with a rich body and medium carbonation.

This makes for a very nice Tripel with a rich sweetness and warming alcohol presence that never become cloying or overly boozy though. While that rich toffee sweetness is rather dominant here, it's balanced very nicely by some hoppy, bitter accents, with those estery fruit and spice notes also coming through distinctly. Although this may not be overly complex, it makes up for that with its subtle balance, making for a rather enjoyable example of the style that's rich in character without feeling cloying.

Pours a hazy golden color with a huge top of white head that dissolves slowly. A lot of sediments in the beer.
Aroma is apricots, pears, banana, orange and lemon peels, honey, yeast, peppercorns and floral hops.
The taste starts off dry and fruity with nice spice notes. A well ballanced bitterness in the finish allong with some herbal and floral hops notes. Nice lenght and strenght in the aftertaste. Mouthfeel is creamy and smooth with a medium carbonation and a medium body.
An excellent made triple, enjoyed to the fullest.

Blind-tasted except for the beer's name and brewery/country, zero reviews below read (yet!)...
L- Mid-darker gold but hard to jusge since it's notably cloudy. Pours with a 2Cm white head. [email protected]+10mins, holds very well and forms lacing on the way down.
S- I get something quite bright and 'different' on the first sniff but then struggle to register it again. It is likely just a part of the Trappist hop facets.
T- Oh yes I get that^ smell loudly come through in the taste. It's distinctive (even if I struggle to ID it! lol), like a facet of bold dry apricot or similar. [My wife with no cues from me thinks it's a citrus/grapefruit note and is surprised to hear it's Trappist].
F- It's like the monks at Rochefort have (for their sins?) been whacked with the hipster stick. No really it's like an attempt to take an uber-trad beer and pitch it to a younger market by adding contemporary hops notes to it.
O- Overall the beer is quite enjoyable, though it's tougher to decide what it is trying to be; like two beers in one. I'll conclude that it's like an attempt to brew a hipstered triple.
Review1933/scoring all done, now the reveal, I get to read the lables to see what I missed! == Ingreds include, 'barley, wheat, orange peel and spices' A-ha!!
330ml bottle BB: 17/03/2023 £2.90 Bought from TremblingMadness, York/UK as part of a large pick-your own consignment to London.

Spicy, fruity and quite complex overall.
It's funny because you can distinguishly get the Rochefort yeast but it's unexpected in tripel.
Overall a nice offering but nothings to shake the tripel game

This one from the beercollector.com.au
A - Pours a NEIPA like appearance but with a thicker head that retains and laces.
S - Aromas are sticky sugars and candyfloss like burnt caramel.
T - The taste is quite different to the aroma, It has the classic Tripel spice, the booze is well hidden and just a hint of the stickiness in there, but it gets drowned out by the booze.
M - Medium body and carbonation which is pretty much what a Tripel should be.
O - This is not a Westmalle nor is it intended to be. It is intended to be a well thought out version of the Tripel that is unique. And it is unique. Is it as good as a Westmalle ? No. But it is a very interesting slant on my favourite beer style that i really enjoyed.

The nose is a cornucopia, so it was a surprise to get something far more subtle on the palate. It’s neither as complex as Westmalle or as drinkable as Karmeliet; instead it splits the difference for a straight citrus-phenol hit that unfolds gradually.
First comes lemon chiffon pie, but with a lasting and surprisingly assertive bitter linger. By the time it finishes opening it’s become an orchard fruit festival, even pushing towards tropical with the lushness of the ripe melon, cut by the signature spice of the house yeast.

Not the best in class, but definitely a grower.

After I had a second one, it became my all time favourite.
It is very hard to get it as the brewery limits the amount you, or businesses can buy. In most shops I saw it, it's one bottle per purchase.