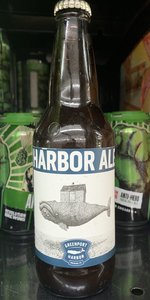 Notes: An American-style pale ale brewed with 30% wheat malt and a blend of Warrior, Glacier, and Cascade hops. Light in color, smooth on the palate, with citrus and tropical hop notes.
View: More Beers | Place Reviews
Recent ratings and reviews. | Log in to view more ratings + sorting options.
Rated: 3.35 by JohnofUpton from Massachusetts

Rated by BFCarr from New Jersey

Reviewed by osheamatth from New York

Nice looking moderatley hazed pour, with tiny bubbles continuing to rise...leaves a load of low ringed and splatters of fine lacing all over the glass.

Bready and softly hopped up nose.

More earthy and bready notes up front, with soft and drying hops in the finish. Delicious....fine every day kinda brew

Rated by Mr-Beer from New York

The body is a slightly hazy healthy amber. The head is creamy and fairly stable. I get a slight fresh aroma of fermented malt. The flavor is fairly well balanced, with a modest malt mouthfeel backed up by hop flavor that delivers a tasty flavor with a good dose of bitterness. Some lacing clings to the glass. The hoppy bitter aftertaste is a nice feature that isn't too common in modern American pale ales. The alcohol content, reputed to be 5.3%, is moderate and right where I like it. This is a solid ale that I was an early fan of when I could get it on draft at a convenient bar. I think the bottled beer is going to become one of my regular purchases.

Rated by YoungMtn52 from New York

3.8/5  rDev +5%
look: 4 | smell: 4 | taste: 3.75 | feel: 3.5 | overall: 3.75
Pours an at first slightly cloudy straw golden color that later clears up. An aggressive pour yielded a big thumbnail and a half length bubbly head that disapates into a creamy lace that retains well.
My favorite aspect of this brew is the sweet fruity aroma; hints of strawberry jam and citrus, caramel, honey and some floral and pine qualities.
The taste is also sweet but balanced by a slight lemony quality. The hops are mild, herbal and a bit piny. The feel is medium to light. The carbonation is soft but provides a light crispness. Very easy to drink.
I like this one. It is simple and not too complex but rather tasty.

Reviewed by breardon1776 from New York

Reviewed by Strakosch from China

4/5  rDev +10.5%
look: 4 | smell: 4 | taste: 4 | feel: 4 | overall: 4
Great beer - everything I want in a go-to, session beer. It's hoppy but not too much, and there's some real flavor in here that isn't overshadowed by a ridiculous amount of hops. Some nice lemon and maltiness. Lemon almost like a shandy, but definitely not to that level.

I don't usually review beer, but I figured I would give this one a thumbs up. Props to Greenport.

Reviewed by Stignacious from New York

4.02/5  rDev +11%
look: 4.25 | smell: 4 | taste: 4 | feel: 4 | overall: 4
Picked this up at Fairway in Nyack last week, having never had this before and also knowing that I wouldn't be able to find it in my neck of the woods. I was surprised how low some of the reviews were on here, given how much I enjoyed it and how true to form it was. Those looking for a West Coast hop bomb will be disappointed but this was more balanced than most other APA's that I've had and much, more nuanced that I anticipated. No doubt that that was a great trait for this beer to have!

Nice pour to this as the golden hue was easily surpassed by the massive head and deep rings of lacing that bled down into the next. Nice grassy and floral aroma that was reinforced by orange pith and lemon zest in the taste. The malt leaned towards a slight caramel tone and there was some herbal tea that kicked in later on, giving this an intriguing spicy undertone. Balanced, full, and easygoing, this grew on me quick and went down so easily and smoothly, all while having everything mesh well together in spite of the apparent clash between some of the flavors.

While not a true session beer, this could fall under the category of one since it was so light on the alcohol that it wasn't even detectable. It was there when all was said and done but with a nice array of hops and enough malt to counteract them, who would even notice? Much like SNPA, this is an APA that is almost impossible to dislike while setting the standard that other examples blow past in order to out-slug each other in the bitterness department. An underrated beer that deserves to be available year-round and more ratings on here!

Rated by CreightonSM from New York