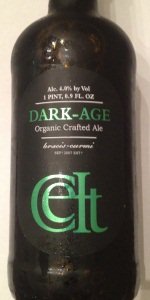 Notes: Elegant smooth chocolate and caramel body with a spice finish
Inspired by the tranquility of the myths of Avalon. King Arthur and Merlin histories emerge from ancient Pagan myths tracing dark ripples through shared legends.
View: More Beers
Recent ratings and reviews. | Log in to view more ratings + sorting options.
3.77 by 22Blue from Kansas on Mar 01, 2016
3.25 by hdtrice from England on Feb 15, 2016
3.68 by zotzot from Vermont on Dec 20, 2015


Taste = 40%
tastes like a typical english pub ale. not much going on. a bit water, some mild fruit. finishes bitter. perhaps slightly over hopped.

eh. not my favourite style but doesn't feel all that inspired. Interesting it has some detailed tasting notes on the bottle so that the drinker knows what s/he is supposed to taste.

New one for me, picked up during my travels in Powys recently.

Look: Cloudy pour, such that I read the label again to see if had missed the words 'bottle conditioned' anywhere, but nope - not that it bothers me personally but a brave choice as some will hate that. It says unfiltered, so I wasn't expecting bright, but I wasn't expecting opaque either!
Way over carb'ed for a mild so I've let it sit a while.
Dark brown, but I wouldn't say ruby, just brown.

Taste: Very very hop forward, almost no traces of malt in the mouth, despite it's colour, more like the trendies Black IPA's although less ABV. Roasty aftertaste, black malt.
IBU's clearly more than advertised, in the low to mid 30's.
Pine, something 'new world' about the flavour but can't put my finger on hops. Nothing delicate about them though...

Guess at least 80% pale malt, crystal in the smell although I can't taste it, and black malt fairly strong at the end. 85/10/5 perhaps.

Overall: For all that, quite a pleasant tipple, although almost the polar opposite to a Mild which is a shame, as it clearly says mild ale on the bottle and I enjoy milds.

Aroma and Flavor are mild, as per style. Sweet malts, some dark fruit and earthy hops in the nose. The hops largely disappear from the taste, but leave the ale with a good sweet/bitter balance.

Fills a Harp nonic with a dark brown (SRM 25-28) clear beer with ruby to mahogany highlights that glow when put to the light. The thin, wispy, off-white head leaves spotty lacing.

The aroma opens with rich malt and Baker’s chocolate most prominent, followed by cashews and molasses. There is a slight sweet aroma of pumpernickel bread. Warmth brings out saw-cut walnut and there are no hop aromas whatsoever.

Dark Age is earthy and well balanced. The flavors tilt towards the bitter side and build long into the finish. This one is quite bready with some tobacco and some peat. There is a strong impression of sun tea while the finish leads towards coffee grinds.

A smooth texture with medium body and faint carbonation lends well to the dry, alcohol-challenged nature of this beer.

This is a highly sessionable beer with enough character to enjoy on its own, yet reserved enough to allow long conversations and light food to take center stage.

500mL bottle poured into a snifter.

(S)- A nice mild yet rustic nuttiness with raisin.

(T)- Pretty similar to the smell with a rustic nutty roasted raisin profile.

(O)- A rather nice beer. Not a huge mainstream style (in fact, my first venture into it), but quite appreciated to have versus the tried and true styles produced today.

A: The beer is clear but very dark garnet red in color (black when viewed from a far distance) and has a light amount of visible carbonation. It poured with a thin beige colored head that quickly died down, leaving lacing on the surface and a collar of large bubbles around the edge of the glass.
S: Light aromas of chocolate malts are present in the nose along with some hints of dark fruits from the yeast.
T: The taste is similar to the smell but a little more complex with flavors of chocolate and dark malts along with faint hints of bitterness and to a lesser degree roasted malts.
M: It feels light-bodied on the palate and has a low amount of visible carbonation.
O: This beer very easy to drink given its light body and low alcohol content while also being quite flavorful that it reminds me of a "light" version of a good porter.

Poured from 500mL bottle into a pint glass.

Appearance: rich red-brown hue with a haze-free body and a moderate effervescence. Head is two thick fingers of pillowy tan foam. I quite like it.

Smell: light aroma which is nutty, toasty, caramelly and a little biscuity. Just spot-on for the style.

Taste: flavor largely tacks with the aroma, although it has a little bit more strength. Assertive maltiness with a hint of roast as well as caramel and biscuit; a hint of sweetness keeps it interesting. Bitterness is low but definitely present. I like it.

Mouthfeel: light body with a good level of carbonation with a bit of a rocky creaminess. It's hard to get a good mouthfeel out of a mild, but they've done a pretty good job here.

Overall: this is a definitely drinkable and tasty mild. I love dark milds for their quaffability, and this one has a good complexity for such good drinkability.

Poured into a Samuel Smith imperial pint glass. Pours a dark reddish brown amber with a half finger off-white head that dissipates to a thin film with light lacing. Aroma of dark malt syrup, lightly nutty with a faint dimethyl sulfide component. Flavor is mild toasted and biscuit malt, grains, hints of coffee and chocolate. Finishes with toasted and charred malt, mild hop bitterness. Light bodied. Although the flavors are mild, they are reminiscent of a low key porter. Fairly complex balance of malt flavors with hints of smoke or peat. Although light in flavor, suprprisingly flavorful for such a mild ale. This is my second Celt Experience ale and I'm impressed. An interesting take on the dark mild ale style.

It has a very attractive dark, mahogany brown pout with a long-lasting, delicate off-white head.

The aroma travels the spectrum of dark malts, smoke, coffee sweetness, and black licorice. In some respects it reminds me of the aroma of a Porter.

The body is medium to bold with a slight acidity.

The taste starts out on the sweet side but then the coffee grinds kick in with a low bitterness tying it all together at the end. This has the bold character of something bigger than a 4% ABV beer.