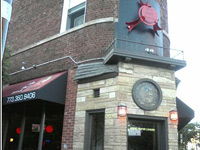 View: Place Reviews
Reviews: 41 | Ratings: 96 | Log in to view all ratings and sort
Reviews by malcontent:

I've been here a few times since Feed the Beast Went under and Bad Apple stepped into the spot.

They've done away with some of the more garish aspects of the former tenant and made it a modern yet homey room. The much less-hectic backroom is a nice option for groups hoping to meet without having to shout at one another.

I've had at least 6 beers here on different occasions and have never had a problem with dirty lines or a bad draw. The selection, while not world-beating, should have something for nearly every taste. It's a strong balance between local and American favorites with a healthy dose of Belgian stuff thrown in for good measure.

Still have not had the food but the service at the bar, save on my very first trip opening week (which I'll give them a pass on) has never been less than pleasant and attentive.

Great option in a somewhat generic stretch of Lincoln Ave.