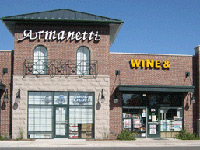 View: Place Reviews
Reviews: 2 | Ratings: 6 | Log in to view all ratings and sort
Reviews by rossracing:

I was in this store on the July 4th weekend, and, If you are micro beer lover, you should visit this place. Has great selection of beers like dogfish head, two brothers, founders, bell's, flying dog, firestone, stone, breckenridge, arcadia, centeral waters, capital, chimay, lagunitas, great lakes, boulavard and much more. most of the beer available cold on the side of ther cooler,and inside the cooler. friendley staff. They can order ther beer if thay don't have. Great prices, at leeast $ 1 or $ 2 cheaper than Binny's. I'm impressed with the selection. They also had craft 12 pk

While visiting family in the area, I stopped at this location of the Armanettis chain, located amidst the dwindling cornfields and newly minted subdivisions. It's on Hwy 47, turn at Rainsford Rd., there's only one entrance to the shopping center. It's a fairly airy and open store, the beer selection was pretty respectable too. The windows had a one-way mirrored covering to block out the sunlight, which was a good thing. The Two Hearted in the cooler was less than 6 months old, so quality is alright.

Craft beer was mostly chilled, but there was a display of 6-packs near the front, and an end cap near the coolers with Dreadnaught, Sprecher Barleywine for super-cheap, Sam Smith, Chimay, and a few others. In the far left aisle, there were a few more six-packs, including 2 Bros. Northwind and 5 Dark Horse options. In the back coolers there were staples from FFF, Bells, DFH, Sprecher Reserve line, Founders, Southern Tier, and Rogue. In the walk-in cooler (straight back) they additionally had the main 2 Bros. line, and a few others I didn't see in the front cooler.

The selection covers the basics, a few full lines of craft beer staples, and some imports to a lesser extent. The guy at the register was really friendly and pointed out where the water & soda was on the far right side cooler. For the area, this beats Woodmans, but is 2nd to Binnys Algonquin. Worth a look see if you're local.

Armanetti Beverage Mart in Huntley, IL
Place rating: 4.04 out of 5 with 6 ratings