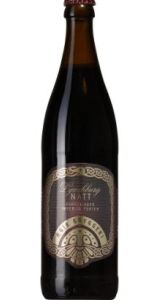 S: Lots and lots of whiskey. Bottle just states "bourbon" but boy does it smell like Jack Daniels. There is some roasted malt with char, chocolate and a bit of smoke to boot. There is a bit of spice in there too, it's almost cinnamon-like, oddly enough. Some vanilla here and there.

T: Bourbon isn't as strong as in the aroma (which is mostly a good thing) but it's still prominent. Up front it's all caramel, toffee and brown sugar with a bit of vanilla. In the middle it turns more roasted malt with char, chocolate and even more vanilla sweetness creeping in. I get some strong anise and then it fades into a little more sharp, boozy whiskey with some coffee in the finish. A bit of stinging alcohol in the lingering aftertaste. This is clearly very fresh.

M: Heavy but not overly so.

O: Big boozy bourbon-barrel imperial porter. It's quite good, very strong and sharp flavor characteristics but surprisingly balanced. Very complex. Wish the roasted malt were a little stronger but honesty it would just be a barrel-aged imperial stout at that point. Surprisingly good beer, really caught me off-guard for sure. Creamy and drinkable despite the sharp flavors and high ABV. I might be biased, I "grew up" on Jack Daniels but it honestly does work with this beer.

This beer is not the same as the Ægir Natt listing here. The ABV% is the same, the lable has similarities but this is specially labled 'Lunchburg Natt' - suggesting bourbon barrels - and 'Barrel-aged imperial porter'.
L- Almost 100% black, but held to a halogen a few glints of deeep ruby-red show through. Pours with brief 2mm tan head, unsurprising it's brief at 10%ABV (x-ref surface-tension vs ABV% etc).
S- Whisky... make that whiskey!
T- Whiskey! Really huge here, I even involuntarily shudder for a moment on the first large sip. Not because it's unpleasant but because it's so pungent it was a surprise. Nothing else seems to have much of a hope getting through after that.
F- Deep, pungent, over on the rich side and it almost has flashes of outright sweetness now and again. The clear, forthright liquor notes dominate pretty much everything else.
O- I say, blimey! This is a Bourbon-beast of a beverage. It must be the beer with the most prominent whisky edge I've had to date - trust the Norwegians hehe!! If you can't at least tolerate whisky then don't even bother trying this beer, that's my suggestion. I'm not a whisky drinker though I can drink it, and I won't have a problem finishing this.
I don't know how I consider this for balance, as the bourbon absolutely dominates here which I believe means it's unbalanced. But, frankly after drinking it I'm losing the will to contemplate that more deeply...
It's a beast, even beyond it's 10ABV%. Would make a really nice Xmas slow-sipping beer for a black-beer + whiskey afficionado...
Bought from House of Trembling Madness/York/UK as part of a DIY mixed case for delivery to me in London.
BBE: 07/12/2028 330ml bottle. £5.90

Oh baby. Poured at a good temperature with a nice sized, foamy, thick, tan head that slowly settles and good lacing. Color is an opaque black brown. Aroma is roast, malt, whiskey, vanilla, dark ripe fruit. Flavor's like nose, very rich and includes toffee with bitter, sweet, and tang all very well balanced. Body is full, has some slight coarse high points and good carbonation. Finish is like flavor, long, and a little boozy. Can get tight with this tipple.

500ml bottle, beermongers in PDX. An expensive bottle, but having spent a few nights at this once-in-a-lifetime destination, it was an automatic purchase for me.

Served in an oversized snifter - rich chocolate body, creamy thick head. This is really an exceptional beer - the bourbon (jack daniels) casks have not overpowed this beer - rich and decadent with layers of bourbon, vanilla, coconut, dark chocolate, leafy hops, toffee. Creamy and quite enjoyable.

From a bottle, pours an opaque black. It looks very thin and oily, still, no carbonation and almost zero head.

The nose is heavy dark fruit, raisins, plums with lots of barrel and vanilla. The smell of molasses gives it a sweet fragrance. The flavor is vanilla, bourbon, whiskeys, grape skins, mixed with cocoa, molasses and more vanilla. This is extremely well balanced, a bit thin, but that makes it that much more drinkable. The alcohol is barely present, goes down smooth, great mouthfeel. This is delicious.

Smells mostly of whiskey barrel and a strong vanilla.

Fine mix of chocolate and whiskey that's not palate wrecking. It's a desert beer that's all up front and not really complex. The finish is sweet and not the burn expected of a 10%-er. Needs just a touch of something extra, still I'd love sit down with this and vanilla ice cream.

Smooth full bodied brew that's definitely more of a stout than a porter.

A black one, a tan head leaving little lacing but good curtains.

A bit too sweet, very liquerish.

Pours an almost opaque super dark brown with a foamy khaki head that settles to wisps of film on top of the beer. Tiny dots of lace form around the glass on the drink down. Smell is of dark roasted malt, cocoa, and bourbon aromas. Taste is much the same with cocoa and bourbon flavor on the finish. There is a mild amount of roasty and woody bitterness on the palate with each sip. This beer has a good level of carbonation with a crisp mouthfeel. Overall, this is a very good beer that tastes better than it smells in my opinion.

A: Pours a deep brown color with a thin tan head. The head disappears pretty quickly.

S: Roasted malt, a good dose of bourbon, raisin, some milk chocolate and some faint oak.

T: Bourbon is pretty well integrated into this one. Big sweet chocolate and dark chocolate brownie notes upfront with a kick of bourbon, some faint raisin and charred wood. Heat creeps up near the finish and leaves a nice warming long after each sip. Mouthfeel is a touch syrupy with a nice smoothness to it that complements the richer flavors. I wasn't expecting to like this that much since I'm really not a Jack Daniels fan, but I really enjoyed it.