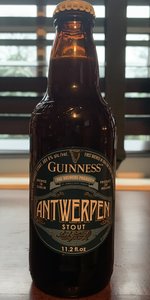 Notes: This 8% abv stout has long been a secret pleasure among beer connoisseurs and indeed our Brewers, who value the mouth watering intensity of its roasted malt, smoked wood and dark chocolate notes, not to mention it's excellent and seemingly endless finish. Since 1944 we have been exclusively exporting this same special stout from Ireland into Belgium through the vibrant port of Antwerp. This is the first time we're making it available for general release in America.
View: More Beers | Place Reviews
Recent ratings and reviews. | Log in to view more ratings + sorting options.

a beer ive been wanting to try for a very long time (they don’t sell it in ireland, or at least ive never been able to find it) and it’s quite good indeed, big meaty stout, dark malt flavour, molasses, marmite, liquorice, espresso, dark chocolate, tobacco, a nice dark fruit sweetness to it also, prune, fig, plum, hint of vanilla, slightly oaky, high bitterness on the finish, medium bodied, low carbonation, moderately viscous, a little thin for its strength which is the one drawback, but it is quite nice, happy to have finally tried it

Was pumped like a 1990’s Reebok, but I was letdown like Jordan not being in NBA Jam. It’s ok, and better than regular Guinness, but not by much. Just a lil more taste and body. Like those lip Kardashian’s against Kim.

#1746 - Blind-tasted except for the beer's name and brewery/country, zero reviews below read (yet!)...
L- 330ml bottle marked on main front lable as 'Guinness Special Export'.
Superficially black, held up to a halogen actually ultra deep ruby-red. Clear, pours with a 5mm deep tan head (of fine bubbles suggesting it'll stick around). ps It does, and forms lacing, still lingering 20mins later...
S- Toasty-roasty-fireplaces... + some hints of fruit I believe, dark raisons?
T- Here the fruit/raisons... almost a wine-like aspect to it comes first. It's pungent but has a deep + sliiightly sour fruit aspect. It is nothing less that INCREDIBLY different from the swill you would get if you asked to be poured a pint of CO2-forced draft under-license black stuff you'd find in almost all UK pubs
F- It's pretty pungent and somewhat rich. The pungent/rich+slightly sour is a clever interplay.
O- The beer I just had earlier was a Nigerian brewed Guinness. This is different, nothing stands out of place as unblanced or 'wrong [or WTH is this facet]'. It's pungent yet refined, very easy drinking. Expensive but good and an experience, not likely something most will be buying frequently as a specialist import
As I understand it this is brewed in Ireland (shows what they CAN actually brew in Dublin!) and is exported under a special commission contract for the style to Belgium.
I'm not a born Guinness drinker, most UK brewed Guinness is rough. Now if it tasted anything like this I'd happily drink it!
Review/scoring all done, now the reveal, I get to read the bottle lables to see what I missed!
330ml bottle £4.15 BB: 18/06/2021 8% Bought from TremblingMadness, York/UK as part of a large pick-your own consignment to London.
At this shop^ it is described thus: 'Export Stout // 8.0% Abv // 330ml Commissioned by John Martin of Belgium in 1912. The first variety of Guinness to be pasteurised, in 1930.'

This was my favorite beer for a long time until I tried Focal Banger by Alchemist brewery. I've then tried Heady Topper by Alchemist, the former KING #1 ranked beer on Beer Advocate (currently #5). So how has my opinion of this much lower ranked beer changed? Well, I still consider this a MASTERPIECE and the best Guinness on the market!
It goes down unbelievably smooth for a beer, let alone an 8% ABV beer. It gives you that Guinness, Stouty, Irish flavor you've come to know and love but at the same time, it tastes more refined. If you like Stouts, this beer is in a class of its own and it truly stands up to any beer in enjoyability of flavor!

Look.. Again the very nice stout look. One of the first brands of stout(like many of my generation) I ever tried 30 years ago.
Smell...eh not much. roasty
Taste...Similar start to the on I had last night sour bitter malt in that order (The Foreign Stout) but on the back end very nice sweetness ,choc, roast, mmm
Feel..kinda thin but very like many of the stouts from Guinness
Overall... I like. good not great but still really solid. Nothing I would not finish gladly

Look is the patented great Guinness stout look: deep dark color under a thick, tall, tan, cream head, with decent retention, leaving lots of strings and disconnected islands of lacing down the glass, forming a domed top to the head.

Aroma is faint. I can coax out perhaps a little dark malt, that's about it. Disappointing.

Taste starts out mild and dry, transitioning to a slightly sweet middle, and a dry, moderately bitter finish. The bitterness lingers into the aftertaste. The flavor is (fortunately) more pronounced than the aroma. Roasted malts with slightly sweet dark fruits, hints of chocolate, and a decent tannic bitterness. The aftertaste is rather nice, fruits with tannin.

Drinking this from the 12.5 bottle Antwerpen Stout poured into a pint glass.
Appears black with a nice foamy tan head that lasted throughout the beer.
Smells malty, smoky, chocolate, licorice.
Taste follows the nose.
Mouth feel is medium for the style.
Overall a very nice stout that I would definitely order again.

Poured from an 11.2oz bottle: Poured a a dark brown nearly black color with a thick bubbly 2 finger cream/tan color head that quickly fades away, but leaves a good amount of lacing. A nose detects notes of roasted malt, chocolate and the 8% ABV. The taste parallells the aroma, but has additional notes of coffee, and chocolate followed by a smoky after taste and dry finish. Overall smooth, tasty and stout beer.

Deep roasted malt flavor. A little sweet and vinious in the finish, with the ABV showing itself a bit. Full bodied.

Glad I got to try this one. I prefer the regular Foreign Export Stout over this but it's a good beer for sitting by the fire with.

Pours a dark colour (much like cola). Another review mentions to make sure it's not over-refrigerated - they are correct. Overchilling will ruin the taste. Taste is cocoa, coffee, sweeter, but with some bitterness. Has a small amount of gritty feel to it.

Poured from 11.2 oz bottle into a 3 Floyd’s pint glass. Color is very dark brown almost black with a tan head that lingers nicely. Smell is a slight burnt cocoa or coffee but not very strong. Taste is wonderfully complex mix of nuts, cocoa, coffee and alcohol especially as it warms toward room temp. Important to serve this only lightly chilled. It loses a lot if over refrigerated. Overall a delightful stout. Surprisingly good for a mass production brewer.

Cannot fathom how this beer has such a high rating. The words 'bog' and 'standard' spring to mind when trying to describe it.

Aroma is of virtually nothing. As is the taste. It's 8% but you'd be forgiven for thinking it was closer to 3%. Zero warmth from the ABV. Little to no carbonation produces no head.

This just reeks of yet another beer that Guinness are trying to jump on the craft beer bandwagon with. I have lost count of the atrocious, quickly assembled beers they have produced in the last few years. This beer was apparently made back in the 1940's but then again, their West Indies Porter was apparently made from a lost 99 year old recipe that they found down the back of the sofa or behind a fridge. Yeah right!

11.2oz bottle with a code of L8053GFOO2...opened 6-15-19.
Huge, 3" tan head with amazing retention...sitting like a rock after 2 full minutes. Great, thick lacing left behind when it does start to slowly recede. Dark brown on the edges, black towards the center.
Roasted malt, chocolate and a sourdough twang that's front and center in the aroma.
Lightly charred flavor, not quite burnt coffee. Coffee with cream. Hint of licorice. Wood char. Cola. Some sweetness in the finish but nothing out of control.
Medium body, low to medium carbonation. Creamy finish with all the above flavors that linger around for a while making this a heck of a beer, very nice!

Tried this today for the first time and I like it. I hope they keep sending it to the colonies.

A very nice and tasty stout, definitely rich and dark in character with satisfying flavors.

Pours an opaque black with a thin layer of tan foam. Aroma is rich and roasty, which matches the flavor profile. Roasted notes are the main focus here, with some chocolate, and a touch of black licorice in the finish. Medium bodied, with the alcohol just present at the back of the throat. Overall a nice solid stout for a cold spring day.