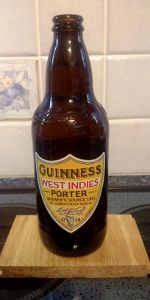 Notes: A group of enterprising brewers on a quest to explore new recipes reinterpret old ones and collaborate freely to bring exciting beers to life.

A style with origins from our brewers' diaries dating back to 1801, West Indies Porter is complex yet mellow, hoppy with notes of toffee and chocolate.

I was on a recent foray to Country Garden Six Pack Bottle Shop here in Lancaster, PA, where they know & love me. They had just taken delivery & one of the proprietresses came over with an armful of singles for me to scour! I sifted through everything and between my running mate & me, we filled a mixed-six, including this one. Glorious times, my friends!

From the bottle: "The Brewers Project"; "A group of enterprising brewers on a quest to explore new recipes, reinterpret old ones and collaborate freely to bring new ideas to life. A style with origins from our brewers diaries dating back to 1801, West Indies Porter is complex yet mellow, hoppy with notes of toffee and chocolate."

I Pop!ped the cap & really let fly this time, given the freshness of the bottle's contents. Once again, this action resulted in a pseudo-cascade that slowly formed a massive three-plus fingers of dense, deep-tan/light-brown head with fantastic retention. S**t! This is going to take forever to fall to the point that I can drink it. In the interim, color was Black/Opaque (SRM = 44) with cola highlights only at the edges. Nose was slightly sour, like treacle or anise, or both, with a biscuity maltiness. I feel like I have smelled a beer like this in the past. Did I live in 1801 & become reincarnated as Bro. Woody? In looking back, it puts me in mind of the Antwerpen Stout of yore. Mouthfeel was medium, not as dense as the Dublin Porter, but decent for the style. The taste was quite rich, very chocolaty with that tang of treacle/anise that I noted on the nose. In looking at my Antwerpen Stout review, I did not necessarily care for those flavors in a stout, but when incorporated into a porter, they were working quite nicely. There was a piquant quality to the admixture that I do not often find in a porter, but which I found to be quite noticeable today. Finish was semi-sweet with the tanginess of the fermented barley giving it a robustness that I do not often perceive in the style.

Really a nice offering from guinness. Thick and lasting head. Nice nose with that typical and appealing Guinness sour note. nice body with some complex flavors of roasted chocolate. The hop finish is spot on standing up to the semi sweet malt side.

I would buy this often if it came in six packs and not in a mixed specialty pack. really liked this one

Poured from a bottle into a pint glass at Dublin airport.

Taste is nice and rich. Plenty of caramel, chocolate and coffee. Just a nice bit of bitterness to keep it from getting sweet.

L- Pours black, with decent tan head that is clearing to lacing.
S- Quite mild, just some toastiness, with a shadow of puddingy richness behind it.
T- Wow, toasty, then port barrels. I don't think it's aged in port barrels but the flavour suggests it might have been.
F- Very different from mainstream [dreary] Guinness; this is a whole different thing and way better for me.
O- The lable suggests notes of 'coffee and chocolate'; agreed, it's a quite complex and enjoyable beer.
Bought from Sainsburys supermarket, London W10, 500ml bottle £1.85. BB: 14/11/19

Friend of mine brought me a bottle back from Ireland. Very dark with good flavor.

Enjoyed as part of a flight at the Guinness Museum / Brewery in Dublin. Review from notes.

Appearance - Near black in color, deep shade of ruby when held to the light.

Taste - Strangely light, certainly some roastiness and the dark fruit does come through here a little.

Mouthfeel - A touch too light for a porter.

Overall - Decent for a lighter porter despite the ABV. Would enjoy this again and would like to try a sample from a bottle / can to see how it compares.