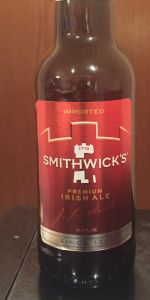 Notes: Smithwick's is a clear beer with a rich ruby color and creamy head. Clean and delicate aroma with different individual notes: from the top fermentation by the Smithwick yeast come aromatic esters creating a fruity aroma. The Aroma Hops added late in the boil contribute clean fresh floral notes. Ale Malt contributes aroma hints of biscuit and caramel.
Refreshing and clean taste with a gentle balance of bitterness from the hops added early in the boil, sweet/malty notes from the ale malt, and hints of roast/coffee from the roasted barley.
View: Beers | Place Reviews
Reviews: 885 | Ratings: 3,109 | Log in to view all ratings and sort
Reviews by Bierwolf:

12 ounce bottle poured into a glass

Appearance: Pours amber with 2 fingers of off white not quite tan foam. Clear with some carbonation. Foam persists gradually reducing to a thin froth. Nice lacing.

Taste: It tastes pretty much how it smells...malt and kind of sweet without any hop bitterness to speak of.

Mouth Feel: Creamy and smooth with a dry finish.

Overall: An okay Irish red ale. Certainly would have it again but if I have other choices this would probably be passed up.

This wonderful brew pours a deep caramel/cola color. Has a nice roasted nut smell. The head is a thin, light tan color, but fades fast. Lacing is good with plenty of carbonation. Initial taste is roasted toffee with a little coffee. Finish is very pleasant and slightly dry. This is definitely better than the Killians Red I had years ago. Would seriously consider a 6-pack now

T: while the aromas vaguely mimic a Scotch ale hide, the taste proves it to be a different animal, as roasted and toasted biscuity grain stands out strong; little rich underlying or residual sweetness; superficial, almost weak bitterness... finish is rather dry, with a hint of brown bread that slowly builds in the aftertaste... overall, the taste has a firm foundation but doesn't pop, has little depth/length

F: smooth, light, foamy... lean body, not quite thin; little roundness, minimal viscosity... the alcohol (and perhaps subtle acidic roast) leaves a mellow warmth at the back of the palate... seems pretty easy to session, seems like it would be nice lift accompanying greasy food

O: bought this for purpose of celebrating anniversary of Phil Lynott's death (4 Jan), listened to some Thin Lizzy while drinking a couple glasses - Phil apparently much preferred this to Guinness... not bad for what it is, would grab some again if circumstances directed me to do so - 4 Jan might be the only time I would purposely seek it out

I had my first Smithwick's while in divinity school last summer. It's dark full bodied flavor was the perfect beverage for the peppered venison tenderloin I sizzled up for supper on several occasions. This is a smooth, non-bitter, manly brew.

This is one of my favorite beers hands down.

The color is light brown and very clear. When poured it left a good 1.5" head that stuck around for quite a while and laced the glass nicely.

Wonderful tasting beer. It has a very balanced taste roasty and malty and very comforting.

This beer is not too thick but also not too weak. It's got great carbonation and it's very smooth going down.

I could and have drank these all night long. No problem. In fact my picture is from Halloween three years ago where I was drinking pitchers of Smithwicks by myself. The wait to get a beer from the bar was half an hour long so when we got up there we would just order pitchers for ourselves and drink straight out of those. Needless to say it was a messy way to drink. But a fun one.

I'm no specialist but I would say Very Good. I'm not a fan of Guinness, but this is a lovely, simple, mildly tasty almost red ale that is unoffensive to taste, feel or bitterness. A perfect beer with a meal in that it will not intrude on other tastes, yet is refreshing. The head is white, light and foamy, like sea foam. It does not taste as dark as it looks. Definitely will have another.

Dark tea-like color, no overly pronounced aroma. Very pleasant first few drinks and still just as good at the bottom of the glass. No particular bitterness.

Grabbed a bottle from my old man's fridge this afternoon. The packaging suggests this one is fresh for another two months. Poured right from the fridge into a nonic pint glass.

L: Pours a crystal-clear, deep-copper amber with about an inch of off-white head that has some pretty decent staying power and leaves profuse lacing on the glass. Lazy, infrequent visible carbonation present.

S: Sweet and bready malts are most prominent in the nose. Slight grassy and earthy quality, possibly from the hops. A fleeting sense of sweet stewed corn. A touch of buttery diacetyl in the mix, as well.

T: I was expecting some substantial malt flavors in the front, but there was hardly anything going on there. Some very muted bready and toasted malt notes, but most of what I got was the taste of water in the front end. The middle brings on more robust toasted and bready malt flavor--some of the malt bill must be quite similar to Guinness Draft, because I'm definitely getting some of that in the middle. More earthiness and grassy notes building in the center. A touch of apple or pear cider there, as well--plum is also in there. Just a bit of stewed corn and some very subtle diacetyl butterscotch notes. The back end continues those toasty and bready malt notes, with some grassy and earthy hop bitter to close things out.

F: On the lighter side of medium-bodied, this one drinks watery, silghtly creamy, astringent, and bitter in turns. There's a pretty good level of carbonation present. It begins watery and ends quite dry.

O: This is one of my dad's favorite beers, and I thought it was high-time I gave it a review. While it does suffer from some of the pitfalls of any mass-produced beer, this one keeps things simple in a surprisingly effective way. The malt bill is pleasant, if not world-changing. There is enough of a hop presence to keep everything clean and balanced. I could do without the hints of diacetyl and adjuncts, but this one is head-and-shoulders above your average mass-produced BMC product. And, I've found that Smithwick's is a lot like Coke, insofar as it pairs quite well with a lot of different food.

Appearance is quite good, with the very dark brown color, the 1and a half finger of head and the fair amount of lacing on the side of the glass.
Smell is pretty lopsided, so much malt and so dry. But it definately intrigued me.
Taste was exactly what the smell led me to believe. Pretty delicious.
Mouthfeel was light to medium in body.
Drinkability was good.

Caramel and toffee in the aroma. Brown sugar as well as dark fruits. Minerally, somewhat cola like. Some clove, cream soda. No hop character.

Quite nice. Better than I remember, but I could just be more accepting of the style now.

T: The taste is as good as you'd expect from the nose. A slight caramel sweetness with some malt backing.

M: This was kind of creamy, a redeeming quality.

D: Simply average. More flavor than BMC products, but nothing special at all.

A. Pours out a red colored body with a thick white head that has very good retention, really nice lacing and moderate carbonation.
S. The smell is some faint grassy and grainy aromas. A slight maltiness to the nose, nothing that really stands out here.
T. I get a sweet maltiness at first followed by some bread, some grains, slight hint of hops in the back and a little bit of a tea taste near the end. It has a sweet aftertaste that leaves a bread, caramel and slight tea taste.
M/D. The mouthfeel is nice and creamy, but leaves the mouth with a dry feel and having a light bodied feel makes it easy to drink.

Drank this on tap several times in Ireland before they began to export to the U.S. Supprisingly drank many more of these than I did of the famed Guinness. Upon returning home I was infatuated with Irish Red Ales, and this one holds its own against all I've had.

A - Deep mahogany on pour. Frothy yet carbonated head. Better than most.

S - Average. Not much really.

T - Wonderful. Slightly carmalized. Alittle sweet in the beginging with a nice subtle hoppy bitterness on the finish.

M - Decent carbonation. Like goldilocks, not to much, not too little. Refreshing.

D - Highly drinkable. I just mowed the lawn and am on my third. Ultimate session beer.

A - Looks dark, not "Guinness" Dark, but if you compare it to Killians or Sam Adams Irish Red's it is exeptionally dark. Beigeish head.

M - You an definitely feel the weight to it.

D - This beer is difficult to drink quickly. If you are in college do not use this beer for beer pong, or try to finish one quickly. It has to be drank slowly.

Overall: This is my favorite beer. In comparison to other irish ales i have tried, this one trumps them all. Anyone who is a fan of Killians should try this.

On tap at Bull Feeney's