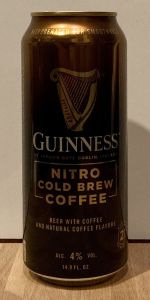 Smell: Smells pretty nice - lots of coffee and caramel notes up front, some hazelnut also and a bit of chocolate. Subtle bitterness on the finish. The nose is surprisingly sweet, which is surprising because Guinness is so dry.

Taste: This is really easy to drink. It's interesting because overall, it basically doesn't taste so different from Guinness Draught to me. I feel like so much of the coffee and caramel notes on the nose are not as detectable in the taste; I guess those flavors do help to work with the dry Irish stout notes and make it a smooth and tasty brew. I think that the taste is fuller and more balanced with this blend than with the original Guinness Draught. There is a gentle acidity on the finish and a very soft bitterness from roasted malts that lingers nicely. Dark chocolate notes on the finish as well. As I get in to this, I can detect more of the sweet and caramel notes on the palate. Coffee is definitely there too, but it's not as strong as I was expecting.

Feel: Very low carbonation. Of course, there is the super smooth and creamy Nitro mouthfeel.

Overall: I kind of like this. I'm not super impressed by it, but I am enjoying it and do not regret my purchase at all. I definitely think that it is an improvement from Guinness Draught (in the can). Purists would say that this is trash and question why would Guinness ever mess with perfection. I would argue and say that there is definitely a market for this type of product and also that Guinness Draught is meant to be enjoyed at a pub. The experience at home in a widget can or bottle is far inferior. This is a nice way to enjoy Guinness at home with cold brew coffee added and it is so much more drinkable.

A: Pours an opaque yet still clear jet black in color after the nitro cascade completed with light to moderate amounts of fine active visible carbonation rising along the edges of the glass and faint dark chestnut brown + dark amber colored highlights. The beer has a three finger tall dense creamy foamy tan head that slowly reduces to a large patch of finger thick creamy film covering the entire surface of the beer and a thick ring at the edges of the glass. Moderate amounts of lacing are observed.

T: Upfront there are moderate flavors of roasty + dark malts with a light to moderate amount of lactose sweetness. That is followed by slightly stronger than moderate flavors of cold brew coffee as well as some light hints of vanilla. Light amounts of lingering roasty bitterness.

M: On the lighter side of medium bodied with light to moderate amounts of carbonation. Extremely creamy.

O: Easy to drink with well hidden alcohol and a very pleasantly creamy mouthfeel. Enjoyable, especially if you like cold brew coffee.

I just loved this upon first try. I'm looking forward to this in the fall.

Notes via stream of consciousness: Haha! This is "BEER WITH COFFEE AND NATURAL COFFEE FLAVORS", why is that? Is coffee alone not enough? Is it less expensive to brew it this way? Regardless, it's poured like a standard can of Guinness Draught, and it looks the same. The aroma, however, is very much like creamy coffee. It's bright and enticing. The taste is similar but with Guinness stout added, or vice versa. One interesting thing to note is that this is 4.0% ABV whereas the Draught is 4.2% ABV; I'm guessing that's because of the added coffee. The mouthfeel remains the same. I'm pretty sure that I don't need to go over the whole thing as everyone knows what Guinness tastes like. So that was an easy review, right? I wasn't thinking that I'd really like it but the coffee flavor is good and it leaves a pleasant nuttiness behind which is nice.
Review #7,916

First off, this pours a beautiful cascade of carbonation due to the Nitro ball (or whatever) that's in there. Whatever the cause, it's stunning. Even after the cascade stops, the gloss black topped by the creamy tan head is just beautiful. Full marks for appearance!
The aroma is mild for me, but that's my norm. Chemically damaged sniffer. I did get faint coffee and deep roasted malts, so it was on target.
The taste is too, just rather a let down from the opening act. It's tasty, and for a sub 5% ABV, pretty impressive. But Samuel Smith can do a 5% with full flavor and feel, Guinness should be able to as well. But maybe I'm expecting them to leave their base customers for my preferences. Mox nix, if you like Guinness regular, give it a shot. If you like coffee stouts, give it a shot. Heck, if you're thirsty and it's available, give it a shot!
The feel; again, if you are used to Guinness regular you wil likely appreciate the added creaminess of the nitro, or not. I prefer more body in the beer and less in the head, but that's a personal thing.
OA, glad I tried it, won't have a problem finishing the rest, for the price point and appearance alone, it's fun to watch and pretty tasty.

It’s really good. It may not be better than the original though

Poured from a can. Looks like a Guinness; jet black with a cap of khaki colored head. Aroma is fresh ground coffee and sweet chocolate notes. Thin mouthfeel. Roasted malt and coffee flavors that are blended well. Slight coffee bitterness lingers after the sip. Good variation of Guinness. Very enjoyable.

nice try at a coffee brew , but stay with the original guinness it's the best

Wow--I've had a lot of coffee beers in various styles, but can't recall any with more coffee nose or flavor than this one. As I usually do with "widget" beers, I emptied the 14.9 oz can into a 20 oz nonic and it left a nice, reasonably lingering head once it cleared. As said, loads of coffee up front with a touch of dark chocolate and that continued right through to the aftertaste. Bottom line: If you like coffee beers, this is required reading.

Side note: Although this is a great beer (especially considering its relatively low ABV), I'd love to see a milk stout version (cafe latte, anyone?). Actually, this would be a great candidate for a stout float (with a big scoop of artisan vanilla ice cream--shut up, "purists"--anything goes with beer and food)!

Jet black Guinness look with a nice foamy head. Think everything Guinness for sake time of this review. With that being said, there is a creamy coffee flavor in this too, and not like a meh coffee, it’s a really good medium roast low acidity coffee that is really good with the nitrogen and Guinness flavor. Really really good.

Poured hard from a nitro can into a snifter glass, with the nitro eventually forming a finger of light tan head. Head sticks around quite a bit on top of a coffee brown body. Smell is very mild coffee. Taste is exactly like the name, mild cold brew coffee, just a little bitter and sweet. Light to medium bodied thats nitro creamy with a mild bite at the end. Tastes just like the name.

It's pretty much a 3/4th Guinness stout brewed with 1/4th cup of nitro cold brewed coffee.

I'm a coffee and beer enthusiast. I found this quite delicious (No complaints!)

Poured from a 14.9 oz can into a Sam Adams Nitro Project glass.

The beer pours nearly jet black with some ruby highlights and a beautiful cascading effect producing a large tan/khaki head that slowly recedes leaving behind a thin cap.

The flavor is mainly coffee, with hints of chocolate. Very lightly roasted malts and a bit of cream. Velvety smooth body (as with most nitro beers), even if a bit thin.

Overall, This is about what you would expect, Guinness Draught with the addition of coffee. Nice easy drinking beer.

Gorgeous nitro pour: dark coffee body with a nice, persistent 3/4inch mocha head. Enticing, and lasting nose of roast coffee, vanilla, cocoa, and subtle milk chocolate. Taste follows with hallmark roast coffee dominating. Complimentary hints of nuts, vanilla, cocoa, chocolate. Wish the chocolate notes were as prevalent on the palate as the aroma. Super soft, silky feel, of course. Leans a little more than usual to the watery side. Still, tasty and seems to improve with each level of warming after the pour.

Pours opaque, jet black in color with one half inch frothy head. Taste is Guinness with a touch of coffee and cream. Medium body and carbonation, roasty. The coffee adds to a pleasant aftertaste but never overpowers the beer. I prefer the original but this is very good.