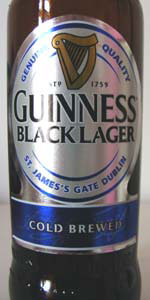 Rated by JWChamberland from Maine

3.22/5  rDev +2.5%
look: 3.25 | smell: 3 | taste: 3.25 | feel: 3.5 | overall: 3.25
From notes 1/24/13: Pours a deep brown appearing to be ebony black with garnet hints when held to the light. The pour produces 1.5 fingers of frothy, somewhat lasting, light tan head that leaves a nice collar with tiny motes and streaks of lace. Aroma is thin being subdued dark roasted/burnt malts, a little chocolate and toffee, a hint of sourness and a faint hint of smoke. Taste is also thin and similar to the nose but more robust. Lightly bitter, very dry and peppery from mid-sip into the finish, declining to a lightly bitter, roast aftertaste. Mouthfeel is medium to heavy bodied and smooth with abundant, spicy amounts of carbonation.
Oct 31, 2019
Rated: 3.1 by KMcGrath from Massachusetts

Reviewed by singletary from Mississippi

Reviewed by StArnoldFan from Texas

S- I am getting burnt malt, 90%+ dark chocolate, rich, deep toffee and I detect some dark dried fruit aromas, like raisins or even fig....its quite nice actually. Overall it reminds me of a less inspiring version of the draught.....

T- The flavors are kind of all over the board, with burnt malt/heavy roasted malt, dark chocolate, black coffee characters and some fruity notes. I find it good....can't say anything bad about it flavor wise, however, it is weak but not unlike other black lagers I've tasted. Good presence on the palate.

M/O- Creamy mouthfeel and light/medium bodied, this is a refreshing black lager that does in fact have the unique character of Guinness. It is highly drinkable and is it the best beer out there?....no....not by a long shot. But I fail to understand the lack of love for this one.....unquestionably because of the large scale name associated with it. I tried it with an old cheddar...quite nice and I recommend giving it a try for sure!

3.44/5  rDev +9.6%
look: 3.5 | smell: 3.25 | taste: 3.5 | feel: 3.5 | overall: 3.5
sounds like this is getting some pretty negative write ups. not all the way sure why, as for a european dark lager on a budget, its pretty good, practical, drinkable, and generally fine. a lighter color with a lesser body, like a darker root beer in the glass, but the head is nice. how dark and thick did you expect it to be? i think it fits the style fine, and even has a nice deeper darker roast on it in both nose and taste that makes it somewhat distinct, somewhat obviously a guinness product, and somewhat worthwhile, despite the poor reviews. its a nice beer for cooking, but its also a nice one for drinking, even with a little age on it (forgotten bottle in a basement box), but its pleasant still, smooth, oddly rich for how dry it is, and really well carbonated. a lighter side of dark ale, even with the grain depth. licorice, scorched barley, euro lager yeast with a little oxidation. its about what i expected, but i think its well better than its ratings here. it was never going to change the world, but its a more than passable dark lager. in the right context, this is great beer...
Oct 24, 2016

Rated by adamhdg from Tennessee