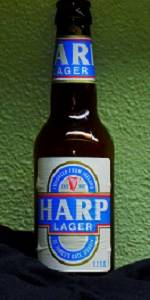 My review for Harp from years ago was removed because I called it "sulphur-ridden swill for shanty Irishmen" (probably reported by someone from Guinness, despite the fact that my numbers were some of the highest it had received!). I shouldn't have added the "shanty Irishmen" part, I was just going for effect, but the "sulphur-ridden" part I'll stand by to my last dying breath. It was! It was way too sulphury for a lager, and as a trained professional brewer with over a decade of experience at the time I called it out!

Anyway, it's OK that my review got kicked because they've cleaned it up and changed it, and now it's a different beer altogether; I would have had to re-review it anyway. The sulphur is gone, and it's more malty and even a touch caramelish. What's the problem with that? Well it's not the beer that it originally was, and now it's simply a homogenized "lager" that tastes just like so many other beers out there. In fact, I wouldn't be surprised if they had Yuengling Lager in mind when they made their changes! And that's a shame, because even with its defects it was at least original. Now it no longer exists and you'll never be able to try it, and with that said, what you can get now is even more worthless in my opinion, but I don't want to be negative (or this review will be removed!) so I'll note that it's very easy to drink, nicely malty, superbly balanced, and has enough character that you can enjoy it for more than one or two - all of which is true, just like so many other beers out there.

Reader beware! The picture of this beer on this page is NOT what it is now! This beer has been disgustingly raped and violated in the most disturbing manner. Without going into much detail, I rated this beer very poorly not so much by the way it is now, but more so by the way IT USED TO BE!!!

Currently this beer tastes allot like any other, common U.S. beer, most notably Budweiser, and even provides one with the same headache from the fake, watered down ingredients as you would expect from a few other A/B products.

Harp Lager, when it use to be bottled in the picture as you see here, was an excellent, UNIQUE, readily available Irish Lager. But with great shame they've destroyed it.

If you like common American lagers then by all means, pay more money for this and you'll be happy. However, if you are a fan of Harp Lager from the last century, or have a more developed, educated palette with respect to beer, don't buy this! It's garbage, and no where near what they want for it.

The beer is tasty and straw colored with a good amount of carbonation. The head thinned out really quickly but at lasted a while. There is a nice toasted malt aroma with a very minor floral hops smell. The beer has a slit sweetness to the overall smell. Much like the smell there is a slight toasted malt taste upfront followed by a hint of hops. Very smooth and easy to drink. Medium bodied and a slight carbonation feel. Will buy it again. Nothing spectacular...but very good.

Attractive looking with truly excellent froth, pleasant hops scent, and a crisp taste. I'm wondering if I'm just not a great Pilsner-style fan and this is actually top of the rung without me realizing it. Usually anything that suggests pale I'll kick off the table, but I'm finding this one agreeable from time to time. I guess the word "lager" is throwing me off here, with the expectation of more depth and distinction. Still, a smile, nod, and thank you to Harp for the one.

Appearance: Bright yellow with just a hint of orange, thin head and lots of bubbles.

Overall impression: This one was left over from a St. Pat's party. It isn't bad, but also not something I will be seeking out.

Had this on tap at the Baker Street Pub in The Woodlands, TX.

A: White frothy head which dissolved quickly with lots of lacing. Clear golden color which is slightly darker than a pils.

S: Nothing too special. Wheat and hops.

T: Nothing too special, though an aftertaste of honey.

D: An okay beer, goes well with food, but a little unremarkable for me. Tomorrow when I go to play darts with the wife, Im ordering a stout or a pale ale instead.

Had one left over from a party. First time I've had it since they changed the label. Bright green now with a faded celtic knot design. Looks a little cheesy compared to the old one.

A- Crystal clear gold with a 2 finger white head that faded to about a quarter inch for the remainder of the glass. Good lacing, active carbination.

T- Sweet malts with a little hop presence at teh end.

M- A little carbination tingle on the tounge but still crisp and smooth.

D- Good session brew, or on a hot day like yesterday.

Crisp yellow color, bubbly with a small white head, but great retention. Smells a little like skunk weed and some light fruitiness and citrus.

Taste is surprisingly decent for a lager that doesn't necessarily have the best reputation in the craft world. Its a clean and quick taste of brief skunkiness followed by a light but pleasant citrus fruitiness. The mouthfeel is not as crisp as I expected it would be but it is more on the bubbly and fizzy side. Somewhat creamy.

At the very least its a decent choice when pickings are slim. But at best it drinks like a half-way decent lager.

Not as bad as I once thought it was. Good straw-gold colour with snow white head. A bit malty on the smell, and this is accompanied by the typical skunky cereal smell of lagers.

Tastes of malt, hints of adjunct, cereal flavours, a bit of hops. Somewhat harsh and acidic on the tongue. Seems over carbonated. Drinkable nonetheless. Better with food. Not the best lager I've had, but not the worst.

The aroma seems fuller and the taste richer, so it's worth upgrading some of my original ratings although there still is no significant hop character.

Crystal-clear, pale yellow body with a fat, thick and chunky, creamy, white head sitting atop; carbonation galore in the body; sticky, clinging lacing on the glass. Average aroma for a lager; no rich hop aroma for the style, more like a light malt character overall, comparable to American adjunct lagers. Taste comes across as bland and uninspiring; primarily very light malt character with a shade of bitterness in the finish. Decent mouthfeel; clean and dry finish.

Another disappointing mass-produced beer that doesn't live up to what you'd hope for. It has a really nice appearance but falls flat with any distinctive malt or hop character. Certainly drinkable; certainly mundane...