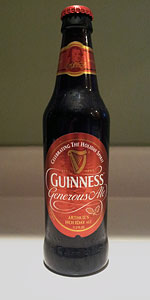 The CANQuest (tm) is always on the lookout for new & different CANs to be added to the ongoing madness. One of my local bottle shops was selling this as part of a "Limited Edition Amazing Ales Variety Pack" and I kept one of each for myself while gifting (CANtrabanding) the others to my colleagues. As it turns out, I have reviewed this beer previously, but from a bottle. Today is Sa, 16 Jan 2106.

From the CAN: "Celebrating the Holiday Spirit"; "Arthur's Holiday Ale".

I performed the Crack! listening raptly as it ocCANurred, but I had to go with a more gentle Glug than I would have liked, due to it being housed in a 16-fl. oz. CAN. C'est la guerre! It began with two fingers of dense, light-tan head that slowly reduced to the point that I could drink it without incurring a beer moustache. Color was Copper-Brown (SRM = > 17, < 22) with NE-quality clarity. Nose was quite sweet, evincing a berry-like quality, like red raspberries. Interesting! Mouthfeel was medium. The taste actually mirrored the nose in this case. It really had a red raspberry flavor and I was reminded of my late-paternal grandmother's garden with its raspberry bush. Preserves were her big thing with the occasional pie, which was a real treat. A pleasant trip down memory lane, courtesy of this beer. Finish was semi-sweet and anyone that knows raspberries will understand. They are not a terribly sweet fruit which is perhaps their attraction to me.

Harking back to my earlier review of Smithwick's Winter Spirit, I wrote, "It was a decent beer, but unless the Guinness Generous Ale is worthy, I am not going to recommend buying the variety pack." Would I now recommend it? Perhaps. The price point on mine was approximately $3.00/CAN & I got three (3) new CANQuest (tm) CANs out of it. I really liked this one, plus I gifted half of it to grateful colleagues. Let's give it my blessing.

I love when the late-night knock on the door is local trader tone77 and not the cops or thugs or other uninvited denizens of the evening hours. He brings me large boxes filled with beers and leaves with bunches of CANs. Ours is a symbiotic relationship as I would probably gloss over bottles in search of CANs and he derives amusement from my CANQuest (TM).

From the bottle: "Be Generous Give Guinness"; "Celebrating the Holiday Spirit Arthur's Holiday Ale"; "Guinness Generous Ale celebrates Arthur's legacy as a brewer of styles with generous flavor and his commitment to the welfare of his employees & the community. Guinness Generous Ale is a full-bodied winter ale, balancing a subtle hop flavor with roasted barley character. Celebrate the spirit if the holidays with this special ale. [undersigned] Arthur Guinness]".

I liked that my pour created a dense, thick two-plus fingers of tan head that sat defiantly atop the beer, refusing to subside and allow me access. Color was a deep mahogany with NE-quality clarity. Nose had a light spiciness to accompany a malty, bready sweetness. Mouthfeel was medium and the taste was like anise biscotti, if that makes sense. Finish was semi-dry. It was tasty, but one was enough. It just seemed to lack oomph.

Reddish brown with ample head. Mild caramel in the nose with bready undertones and a faintness hop hop ... very clean. Some smoothness, mildy crisp with a moderate sized body. Toasted grain, hint of roastiness, grape skin, slightly metallic, slightly sharp bitterness, kiss of caramel, wet body, bone dry finish. Not sure what to think here, not much of a winter ale ... of body nor strength. I guess I expected a bit more, just seems a bit overly processed.

You know you're a ticker when you'll buy a Guinness 12-pack simply because it has a new offering in it. Guilty. This stuff pours a clear smoky topaz topped by over a finger of wan khaki foam. The nose comprises dark greens, light old maple syrup, sweet barley, and biscuit. Things are even more bland than English milds' reputations occasionally demand. The taste is a mess of soapy, grassy, lightly-caramel-y biscuit. Harumph. The body is a light medium, with a light moderate carbonation and a fluid feel. Overall, a limp offering, one that certainly doesn't deserve a 12-pack feature debut (though imagining this stuff in its own sixer is even more offensive, so, yeah...). Guinness can do better.

Has malt bready spice aroma. Dark almost black and ruby colored body. Has a thick two fingered foamy head that lingers for a while. Much like the Guinness Draught in taste but has a maltier presence and thinner feel. Mild spiciness. Leaves a smooth creamy feeling.

Seasonal mix-pack from Guinness with a new beer to my eyes, so I had to give it a shot. The beer was poured from a bottle into a tumbler pint. It pours a bright, vibrant, amber-copper coloring with a thin, clingy, filmy white ring around the surface. Aromas of old world fruit, both subtle and darkly sweet, with a touch of spicing. Flavors are roasted initially, with a significant drop off of body and flavors after the forward profiles. Touches of toffee and caramel blend in the backbone, with a touch of tang throughout. The roasty qualities survive throughout, and well into the aftertaste, which intertwines with a tangy sweetness for a decent balance that is missing on the main part of the palate. The beer is light and smooth, made for a day of quaffing. Sweet linger on the finish, with a slight cloying feel as the last of the flavor leaves your tastebuds. Interesting brew, and not a bad addition to the stateside lineup for Guinness.

The Generous Ale is an easy drink beer.....medium in body with subtle carbonation. Beer poured a clear brownish amber with offwhite head that is leaving only a spotty lace. The scent is bland and the taste carries a tinge of spice. Overall its ok.

Served in a pint glass.

Appearance: A deep dark amber still comes off clear with a nice thick off-white head. Head rose to about 1/2" at minimum granted I had a pretty vigorous pour.

Smell: From the beginning the scent that this brew pushes is more like light barley, light hops and not bad

Taste: Rich hop taste comes off creamy little like a marzen. Has almost a sweet feel of brown sugar but still bitter...no complaints just something a little different.

Overall: Good beer picked up from a variety pack I saw at the store. Easily money well spent considering the other gems that came along with this one. If you see it definitely worth your attention drink and enjoy.

Poured from a 33cl bottle into a pint glass, coded bottle date. This pours a clear amber color with a large tan head which has good retention and leaves a lacing. The smells are of bread malts, nutty smells, and a little hops. The feel is medium. The taste is good enough, a little bitterness some nice bread malts and a little toffee.

Picked this up as a mixed pack from Guinness - Guinness Draft, Guinness Generous, Killkeney Creme ale, and Smithwick. All are in cans (I do love the cans). This is the Guinness Holiday ale. It is quite mild in taste, dark amber in appearance. For a Holiday (winter?) ale it doesn't have much spiciness. I think Brother Jason got it just right with his review.
Update: I'm having my second one and I'm enjoying it much more that=n the first - the flavor seems to be more present this time. BTW this is from a can, a plus in my opinion, and non-nitro (I think nitro would have made this even more enjoyable).

Appearance- Clear dark brown color with a half a fingers worth of head. Light amount of very runny lace.

Mouthfeel- On the light end of medium bodied. Smooth with an average amount of carbonation.

Overall- As a fan of Guinness, I'm a little disappointed with this one. It's not a bad beer but I don't think I will be having it again.

thinner body than expected. A little messy and not as clean as expected. A little tiny. Too many dark fruit flavors, not enough toasty and biscuit notes. Sweet yet balanced. Kind of like an underbaked biscuit with fig jam on it and maybe a touch of butter. Really thins out on the finish. Semi-dry but would benefit from being dried. Definitely needs more body.

Pours a dark but translucent brown with short beige head.Aroma is sweet and bready. Taste is a bit fruity and a touch of bitters.Not what I was expecting for a "Holiday" brew. It is nevertheless very enjoyable and reminiscent of their Smithwicks labeled ale.

Guinness Generous Ale from Guinness Ltd.
Beer rating: 77 out of 100 with 265 ratings