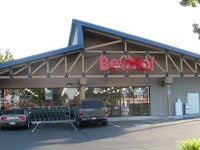 View: Place Reviews
Reviews: 4 | Ratings: 5 | Log in to view all ratings and sort
Reviews by Beerandraiderfan:

Well another bevmo that screwed up my online order. Get your sku# situation figured out, was pretty bummed out when you don't get your Stone beers you were hoping for.

Close off the freeway, visible from the freeway. A decent selection, I usually drop a few bucks here everytime, a little smaller than most bevmos, 2 rows dedicated to beer I think at this one. Cooler space though. They do seem to be cool about letting you purchase stuff and holding onto it for months at a time until you can pick up stuff from there though, so they are trying. Let's just hope the FW14 is still there though.

Not one of the better Beverages & More locations - it is small, rather dark, and fairly cramped and doesn't have stock that some of the bigger ones in the region do. But then again, the prices are good and it beats most shops in the area. So what the heck. On the upside, it does have a pretty good selection of regional beers and a few good craft brewers from other areas (like a little scattering of Dogfish Head and Victory). And the people seem nice. So if you're passing by, it's not a bad visit.

I stopped in here with my wife and parents on our way back from the Vacaville Outlets. We headed straight back to the beer and was impressed with the fact that they had some beers I have not seen at other Bevmos. I picked up a Mammoth IPA 395 wwhich I was very impressed with and a couple more beers that I haven't seen at other Bevmos. Nobody really greeted us at all. My wife asked for help with one thing and they didn't have it but they did look for it. I was pleased mostly with the fact that I got the beers I wanted.The store is a lot smaller than all the other ones. Probably the smallest one

I stopped at this place for the first time back in August. August 12th to be exact, at roughly 8:45pm. I figured it would take BA a while to add it, so I wrote the following review on the morning of the 13th of August. Here goes...

Beer was located straight ahead once I walked in; back-center of the store. Sadly, the selection was pretty weak as far as BevMos go. I didn't see any of the Deschutes specialties (Mirror Mirror, Black Butte XXI, etc.), Old Rasputin XII, Hop Stoopid, Star Brew, Hopsickle, etc. They did have Lips of Faith Biere de Mars, which was kinda cool I guess. They also had an extensive selection from Avery, including Mephistopheles (my lone purchase). But all in all, selection was weak. I also saw some older brews which made me scratch my head: specifically Green Flash Nut Brown Ale. Wasn't that discontinued a year ago?

I can't say much about the service as this was the only stop I ever made and I didn't do a whole lot of talking. One worker (a dude) greeted me immediately as I walked in, which was nice. Once I got to the register, however, I was treated like a pest. I realize I snuck in just before closing time, but this chick was very rude. Whatever, I guess it's like that at most places.