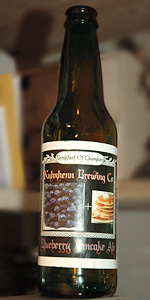 Brought back as part of Kuhnhenn's "Breakfast of Champions" St. Patrick's day party along with many other breakfast themed beers. I ended up not getting this one on tap that day, so thanks to Jeff for splitting his growler of it days later. The pour was murky and looked like shit-colored swamp water. This was definitely "bottom o' the barrel" beer. Not necessarily a bad thing, but it looks like watery mud. Lots of little black and blue specs floating around and clinging to the edges of the glass.

They could have and should have just called this beer "Fruity Pebbles Ale" because that's what I immediately thought of as I brought the beer to my nose and took a good whiff. Sure, I smell blueberry, but it's met in equal parts with plenty of other fruit flavors - much akin to a milky and soggy bowl of the ol' Pebbles. Syrupy, maybe some light maple. On the tail end, there's a mildly spicy and herbal character that I had trouble picking up. Slightly tobacco-like. Also a bit of sweet cocoa here and there, but the whole "Fruity Pebbles" vibe is still going strong and doesn't look to be slowing down anytime soon.

The taste carries a heavy blueberry character for sure; it tastes like Fruity Pebbles much less than it actually smells like them, but some of those multi-colored crispy flavors could still be pulled from this, no doubt. The beer is pretty dense, juicy, and syrupy, partial due to the trubness of the fluid itself. Brown sugar, fruit, blueberry syrup - a nice concoction of flavors clashing midway through. On the back end, I'm picking up some ashy and herbal hops, which again remind me of tobacco. The more and more I drink, the more and more that aftertaste starts tasting like crushed black pepper rather than tobacco. Very slick and medium bodied on the palate, lower carbonation.

Looking back at my empty glass, a handful of particles resembling spent coffee grinds are decorating all sides. Definitely an interesting beer. Blueberry was definitely present, but there was so much more going on than that. Fruity Pebbles, ashy hops, pepper, tobacco, very sweet and sugary over all. Very tasty, although it may be incorrectly labeled!

I got this sample for my wife to begin with and I wound up drinking three samples on my own!Pours a hazy golden color with maybe the best aroma of any beer I have had wild tart raspberries waffle batter,man it is right on with the aromas how did they do that?Taste of fresh ripe blueberries tart and sweet with a touch of malt grainess to keep it balanced just right.Wow this beer would be great in the morning I am not a pancake fan but I could drink this everyday for quite awhile,very well done.

Not the best brew from the folks at Kuhnhenn. Bottle sampled at the 2005 edition of the Mondial in Montreal. Light golden appearance with a small fizzy head of white foam that does not last long. Aromas are blueberry-ish, but seem artificial and the bready malt notes are not too pancake-like as far as I am concerned. Taste is good, but a bit sour/lactic and artificial with not enough real fruit flavor in the mix. Mouthfeel is a bit thin and watery as well, and so the drinkability suffers. I love Kuhnhenn but some of their bottles are apparantly going down the tubes now that they are "bigtime" and stretching all over the place. I hope they can fix all of their problems, and keep making mind-blowing beers!

As the name suggests, this is blueberry pancake beer. Aromatically, this smells just like pancakes. Buttery with homemade blueberry syrup and confectioner's sugar. You could barely get something that smells this good at a breakfast joint.

The flavor is much more dominated by the berries. The Mrs. Butterworth's aromas are pleasant to the nose, but the makers of this beer had something else in mind for the taste. First it's blueberries; but then I'm convinced I've been duped, and it's more of a raspberry flavor. Finally, I think perhaps there are some strawberries. Ultimately, it simply has a truly natural assorted berry flavor with a thin underlying buttery "crust" flavor. Absolutely superb.

Sample at the Mondiale 2005: Poured a weird orangey/brown color ale with a weird foamy head with limited retention. Aroma is solely constituted of pancake blueberry. Im sure I can smell the flour and the fresh blueberry. Blueberry, white flour and butter also dominate taste. Some sourness in the aftertaste was a bit odd and difficult to explain but was still enjoyable. Overall, this is a very good blueberry beer.

These guys know how to do a fruit beer. Poured a clear golden color with a small lace head. Smelled delicious, not overpowering like some of the fruit beers I've had, but enough to make you want it. If you are going to have one beer for breakfast, this is the one. A smooth malty/ wheat flavor. Lots of blueberry, I didn't find it tart at all. Smooth, thick, but not chunky. Very flavorful. Definetly made me think of pancakes. I hadn't had a blueberry beer that I thought topped sea dog, but this one does. It seemed thick enough to carry into the fall too. I like what these guys do!

from my favorite brewery, from the bottle.poured reddish color with a off white head. aroma, those nice sweet blueberries pancakes with maple syrup on them, and more blueberries on top of the pancakes. flavor, just like sitting down to breakfast for blueberry pancakes, hints of brown sugar. this is a little to sweet. but still a very good beer, going to pick up more of this stuff. will be good for a after dinner drink instead of dessert

Served at the brewery at their St. Patrick's Day party.

A - Pours a medium brown with some blueberry colored highlights with a good amount of white head.

S - Good whiff of blueberry pancakes with syrup, slight malts too. The smell is not overpowering and very pleasant.

D - Definitely nice to try, like I said they just nailed the flavor of blueberry pancakes, but honestly I can see drinking this a lot, it is a novelty beer but a good one.

T - Sweet blueberry pancakes with sweet blueberry up front. Light batter and sugar near the end. Sugary sweet aspect that lingers in the finish

M - Light body with light stickiness to it. Sugary sweetness lingers on the backend

32 oz. growler poured into a snifter.

Appearance - Dark brown with a purple tinge. Purple hue to the head, too. Nice.

Taste - Sweet caramel. Spritzy soda-like flavor at the start. Blueberry is masked at the beginning, but comes back with a slightly acidic twang. Pancake grain flavor in the back. Maple sweetness? I might be making that up.

Overall - This is excellent. I'm about to pour some bourbon barrel maple syrup into it. This should be even better.

16 ounce growler picked up the other day. enjoyed from my Kuhnhenn snifter. getting the poor at the bottle shop was ridiculous, there is so much fermented sugars in this beer that it pours all foam and took ages to fill the small growler. beer pours a brown and settles in the glass as purple or black. smell is perfectly blueberry pancakes. it really is amazing. a tad medicinal in the way that the eisbocks are medicinal. taste is really interesting. again kind of like blueberry pancake batter, but with some kind of roast and medicinal qualities like the eisbocks. the beer lost a lot of its luster overnight in the growler and the carbonation was rather soft. a really interesting beer and interesting to try but not something that I would actively seek out.

A - Dark color with a very distinguishable purple hue. Carbonation on this is minimal once in the growler; the pour from the tap was foam for a good 30 seconds. No lacing of note and the foam retention is minimal.

S - Clearly the best part of this beer. Strong notes of sweet blueberry dominate the nose. And I'll be darned if there isn't a scent of pancake batter. The yeast gives off a bit of diacetyl, but this is really an impressive smelling beer. Blueberry beers should take note.

T - Very sweet right from the initial sip. The lingering notes of light grains give this beer a bit of a fresh bread flavor (thus the pancake batter). Finish unfortunately has a slight cough syrup aftertaste. Overall this is a fun tasting beer.

M - Gotta tone down the drinkability for the sweetness and medicine aftertaste. It is light drinking and with virtually no carbonation. Probably a joy for wine cooler crowds.

O - I'd get this again. Might be the best blueberry beer out there. Good to try as a benchmark, and to come back to for a sugar rush.

Growler served in a Jester King chalice. Thanks to nasty31 for sharing.

A: Pours a semi hazy ruby color with a whitish head forming on the pour. It recedes to a thin ring to leaves some splotches of lace.

T: Tastes the exact same as the smell. Sauteed blueberries with a cooked pancake sweetness. A syrupy sweetness with a sugary fruitiness as well. Raw pancake batter as well.

M: The problem lies here as this growler was pretty much flat. It detracted from the drinkability and I needed some carbonation to cut some of sweetness.

O: Despite the flatness of the beer I still enjoyed this. It was really intriguing and I'd like to try some of the other Kuhnhenn Breakfast of Champions beers.