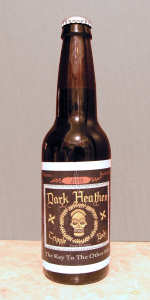 Notes: This Triple Bock is dark brown with ruby highlights. It is extremely rich and complex, with flavors of raisin, plum. There is a slight heat from alcohol and has low carbonation. It is full bodied, malty and sweet– you big beer lovers should try this beer.
View: Beers | Place Reviews
Reviews: 90 | Ratings: 264 | Log in to view all ratings and sort
Reviews by HopStoopid120:

Bought as part of the Winter Solstice mixed four-pack, which was $35 ... so really, this beer cost about $8.75. Haven't had this one before.

Appearance: Hard pour didn't do much. No head, no lacing. Looks flat in the glass. The color of the beer is ruby brown. Sits in the glass basically looking like prune juice. Doesn't look interesting at all.

Smell: Boozy and sweet. The malts come together to give quad qualities -- plums and raisins, but also a mild blueberry aroma as well.

Taste/feel: Aw, man... I don't know... pains me to say that I don't love this beer. Like I was afraid of just looking at the beer, the feel is very flat. There is the subtlest mid-palate carbonation, but other than that, there's nothing. Also, the beer isn't super thick. It's got a syrupy texture to it, but its body is moderate at best. Strangely, I like it not being too thick because if it were any thicker, it'd probably be undrinkably syrupy because of the lack of carbonation. In terms of flavor, it's pretty good. Every dark fruit you can imagine can be tasted in this beer, but there's not a ton of malt character. The finish has a slight breadiness, but it's surprisingly and disappointingly subtle. This is mostly drinking like a heavily sweetened fruit juice more than anything, due to the almost complete lack of carbonation and malt qualities.

A guy at the brewery genuinely claimed this was his favorite beer from the Winter Solstice pack -- I'm not sure why. This would be a decent buy at maybe $5-$6 per 12oz bottle, but about $9 per bottle is definitely too much to pay for this beer. A little more carbonation would go a long way. I can understand this being super sweet, because it's a doppelbock, but the least they could have done was get it not feeling so flat.

This is definitely a disappointing beer. Certainly not bad, but most definitely not worth the price.

Snuck this treat into the AMC movie theatre in NJ, via my wife's Louis Vuitton purse(the bottle was pre-chilled). Funny part is they serve beer and drinks, but only macro junk.

Pours a dark brown mahoghany in color w/ red hues w/ a 1/3 finger white head that left nice lacing. The appearance was the only part I struggled with, had to wait until the movie screen was bright and/or flashed to get a good look. Aromas of dark fruits, biscuit, caramel malts. The taste was of dark fruits(fig/raisin) up front, leading into some boozy spiceness, and finished w/ Belgian yeast and breadiness. Medium bodied and lush w/ carbonation levels on point for a typical German Dopplebock. The drinkability was excellent for what this brew is. I drank the 12oz. bottle without a struggle due to the 12.5% ABV being well masked.

Overall, this was a very good brew that despite stepping outside the box, as a suped-up dopplebock(tripelbock), still conformed to the German style. Would gladly drink this brew again, but still prefer a regular top-notched Dopplebock better.

The movie, Gone, was excellent, but maybe the beer made it better.

Taste - Less sweet than the nose implies. Sweet up front, but it drops off to a much deeper raisin and earthy malt flavor. Some bitterness. Boozy.

Mouthfeel - Well it's boozy as hell. Hot and low carbonation. Sipper for sure.

Overall - I know it's supposed to be boozy, but this is pretty harsh. I hesitate to say I wish it were sweeter.

Very modest dusting across the surface of a yellowish tan hue, gone swiftly, the lacing is wispy and scattered. The liquid is a murky dark brown with an orange tint around the edges, fully opaque with a greater quantity of visible bubbles than expected, albeit moving lazily. The nose is rife with raisins, dates and milk chocolate, has a breadiness which verges on pastry, starts to develop a burnt smokiness as it warms. Full-bodied if hollow in the mid-palate, the sweetness seems to have receded which provides more space for the tart cidery, vinous notes. The chocolate, butterscotch going strong, black licorice, cola bean and candied ginger abound. The cherry, green apple, yellow raisin, fig fruit flavors steady enough but lack intensity. The carbonation does an okay job of showing up given the thickness of the liquid. Boozy but without burn. Doughy, bready through the attack, gone by the finish. Biggest flaw may be that it does not build to a meaningful crescendo, starts off well then meanders. Maybe was more powerful in its youth. (2011 bottling)

Dark cloudy ruby with brown highlights, poured into a Kuhnhenn tulip glass. A thin tan head that does not last.

Mouthfeel is heavy and syrupy. Low levels of carbonation. A warming alcohol presence.

A - It has a ruddy brown body with burnt orange highlights. It is topped with less than an inch of tan head.

S - It has a dark fruit aroma. I get some dates and figs. It smells sweet as well.

T - The taste is all malt. I get some dates and molasses. The alcohol is well hidden. I'm sure 2-3 years has helped that aspect.

O - This is a malt bomb. It is high in alcohol and high is sweet malty flavors. I like it. I think is has aged wonderfully and developed into a very good beer.

A: Pours a brown toffee like color with tiny tan bubbles coating the oatside of the glass. Still and lifeless after the initial pour and settling.

O: This is good, but not $8.99 good for a 12 oz bottle. Always a pleasure to try all things Kuhnhenn but they do better on just about every other release comparatively.

Appearance: dark, rich caramel brown hue with plenty of haze and the thinnest layer of tan foam. Described as a low-carbonation beer, this shouldn't be surprising. Still, it's quite nice to look at.

Taste: raisin and date back to the fore, followed by a definite alcohol bite. Rich creamy caramel pervades the palate, and the deep fruity flavors accentuate that base. Along with that, there is nothing here really off-putting; it's a doppelbock with a little finesse.

Mouthfeel: not enough carbonation to be creamy, but the thick body has a rich silkiness which is quite satisfying indeed. I like it a lot.

Overall: I am really enjoying this beer. I'm not always a fan of the style, probably because it's such a hard one to get right. Kuhnhenn has got this one right.

2011 vintage. Poured from a 12 oz bottle into a Pipeworks snifter.

A- pours a hazy, dark amber with no head retention. No lacing.

M- full body and low carbonation. Thick and semi- dry with warming feel at the finish.

O- still pretty hot for being a year or so old. It's no Aventinus eisbock but pretty good and would like to try a 2 or 3 year old bottle.

A - Pours a brownish red color, tan-colored head, thin ring around the glass with some bubbles randomly popping here and there, and some thin film on top.

S - Big dark fruity nose, caramel, smooth alcohol, slight oak. Smells like a smooth aged barleywine. The 13.5% is there, but it's very subtle and smooth...age has done this one well.

D - Very enjoyable and glad I got the chance to try this one. More like a barleywine then a doppelbock, but who cares, I liked it. Probably not many floating around but try if you can find.

(S)- Very dense and dark raisin, molasses, and burnt caramel. Bits of cocoa with notes of licorice increasing as it warms.

(T)- Wow, some VERY up front licorice and raisin characters. Some deep burnt caramel and vanilla sweetness on the finish. Very rich throughout. Seriously though, alot of licorice in this.

(M)- A smooth carbonation level. Overall, it is very rich and sweet but surprisingly not cloying. Extremely well integrated ABV. For how big this is, I do not get a feel of it being syrup or as thick as I expected; quite smooth actually.

(O)- Overall, if you like tons of licorice, this might be your holy grail. Despite that, I was quite impressed with how well balanced this is while still keeping it toned down in the thickness of what it could be as well as the expertly well integrated alcohol. Reminds me of a more balanced, less alcoholic Samichlaus.

resistdefy from District of Columbia

Thanks Ron! 12 oz sampled alongside the infamous SATB. 2011 edition.

Brown and clear, the looks are certainly lager-y. Not much of head retention. Prominent notes include straight up maltiness, toffee and chocolate. Somewhat alcoholic which is welcome. Feels a tad thinner for its intensity but on the up side it is very clean. Glad to have had it.

2011 bottle bought at DeCicco's. Never had heard of this beer, price is high, but always looking to try new, vintage Kuhnhenn.

Chocolate truffle, aged caramel, dark fruit, some toasted bread. Very nice, rich without being over the top in sweetness.

The mouthfeel brings on the malts but feels a bit thin, some warming alcohol heat. A bit of a sipper but good enough to keep you interested.

Nice, pretty authentic and rich flavor for an American doppel-triple-bock with a nice aged touch to it. A bit on the sweeter side and alcoholic as expected but fitting.