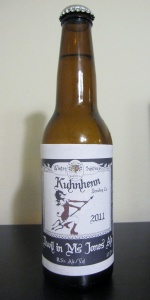 I got a bottle of Kuhnhenn's Duvil In Ms Jones Ale from my friend as a Birthday gift, thanks a lot Ben. I've never had this beer before, I almost got to try it once, but by the time I got served the keg had blown and I'm interested to see what Kuhnhenn can do with this style, so lets see how it goes. 2011 Vintage. Poured from a brown 12oz bottle into a Belgian tulip.

A- The label looks nice, it got a nice design to it and it's a little eye catching, but it still looks like something I could print on my computer. It poured a very cloudy slightly golden burnt orange color that took on more of a orange and burnt orange like color when held to the light along with a finger and a half worth of off white head that quickly died down to a very thin ring that eventually faded away.and it didn't leave any lacing behind. This was a nice looking beer, but i wish it left a little bit of lacing behind.

S- The aroma starts off with a higher amount of medium sweetness followed by a sour aroma being the first to show up and it's followed by the yeast that imparts some spicy Belgian yeast aromas with a noticeable orange rind aroma. Up next comes the malts that impart a grainy, wheaty, light caramel, and cereal like malt aromas with a slight vinegar like aroma on the finish along with a slightly boozy alcohol aroma. The aroma is nice, but some of the aspects don't mix as well as I would like.

T- The taste seems to be similar to the aroma but not as rough around the edges and it starts off with a slightly higher amount of medium sweetness followed by the malts being the first to show up and they impart all the aspects that they did in the aroma but they are pretty light and don't stick out nearly as much. Up next comes a nice amount of medium tartness that has a nice sour candy like flavors and that it's followed by the Belgian yeast which imparts all the aspects that it did in the aroma with some nice fruity flavors seeming to stick out the most and they work well with the sour flavor. On the finish there's a little more lingering tartness with a fruity and light Belgian yeast like aftertaste. This beer tasted pretty good, I thought the sourness worked pretty well with the fruity flavors.

M- Fairly smooth, not very acidic, a little refreshing, crisp, on the lighter side of being medium bodied with a slightly higher amount of medium carbonation. This beer had a very nice mouthfeel that worked very well with this beer.

Overall I thought this was a pretty good beer and I thought it really wasn't the best example of an authentic Belgian Strong Pale Ale, it didn't have all the qualitys that I look for in the style and the sourness isn't something that you normally get with this style, but that still doesn't take away from how much I enjoyed this beer, while it wasn't a great Belgian Strong Pale Ale, it was still a good beer. This beer had nice drinkability, it was fairly smooth, not too acidic, not overly sour, a little refreshing, not filling and the taste did a good job at holding my attention, I might be able to drink two bottles, but I think one is the perfect amount and I think it would make for a good beer to enjoy in the summer. What I liked the most about this beer was the how well the sourness worked with the fruity flavor and I also thought that the mouthfeel was very nice. What I liked the least about this beer was the aroma, it was a little rough around the edges and the malts didn't seem to work that well with the sour aspect. I would buy a bottle of this if I saw it, and I think it cellared well, I would like to try it fresh and I would recommend this to people who like medium sour beers. All in all I was pretty happy with this beer even though it was nothing like I was expecting I still found myself enjoying it and I think it's fine just the way it is. It isn't my favorite Belgian Strong Pale Ale, or my favorite Kuhnhenn beer, but it's still a pretty good beer nonetheless. Good job guys, think for another good and unique beer.

On tap at Kuhnhenn Winter Solstice Night Two. A so-so Belgian. No aroma, light orange with no head. Some orange taste, a little fruit. A little sour finish, supplementing the sweet yeast and honey. Not too drinkable. A tad boozy and very much uninteresting.

The pour is dirty golden with a small white head. No lacing develops.

The nose gives off a sourness that is notable and of course this beer has the familiar Belgian yeast character shining over all. Slight alcoholic wafts make me enjoy the winelike notes.

The taste is quite unexpectedly sour. There is not a large amount of complexity to discuss. To have a strong and pale beer is something quite interesting. A beer that is decidedly simple, yet packs some power in the ABV department. The sourness and the thickness of the mouthfeel give way to a slightly crips finish and an enjoyable aftertaste. Again, thoughts of a sparkling wine come to mind. This would be very nice served with a dinner.

The mouthfeel is around the medium range and has some syrupy thickness.

Overall, this brew is not one that makes me automatically think of winter solstice. However, imagining this beer in goblets arranged around a nice winter feast does make sense and makes me appreciate the nearly wine like qualities of this brew.

What's the point of spontaneity if you already know what you're going to do and not do? Don't answer that. This is not one of my better ideas, but I have an arsenal of Kuhnhenn beers to get through and these beers aren't going to drink themselves. 2011 Winter Solstice bottle thanks to Masterski. You've drive me to drinking in between sleep sessions. Snifter.

A: Sort of a nondescript golden orange. Small white foam head and scattered lacing. It looks a lot like beer. Not much else to say about the appearance category.

M: Medium body with lower medium carbonation. The mouthfeel is sticky, dry, and a touch thin.

Overall: An enjoyable citrus forward Belgian Strong Pale Ale. I'd gladly have this again but wouldn't buy another 12oz. bottle for $6.

Bottle purchased at the 2011 Winter Solstice. Served in a Darkness glass.

A - A finger of white foam settles to a wispy partial cap, thick collar, and minimal lacing. Mostly transparent bronze body with some visible carbonation streams and solid retention.

T - Taste is less fruity and more Belgian, with some light peppery notes and bready malts. The finish has a bit of pear and stone fruit sweetness. Not much in the way of alcohol.

M - Zesty and mildly harsh carbonation to start, but then mellows out and finishes a bit watery and flaccid. Medium body, lightly sticky texture, with a mildly dry finish. Again - no overt alcohol presence.

D - A solidly crafted Belgian Strone Pale with a nice fruity twist to it. Feel is a bit lackluster, but goes down pretty easily otherwise. One of Kuhnhenn's better Belgian offerings actually. Would drink again if it was on-tap at the brewpub, but not something I'd actively seek out.

Appearance - Pours with a minimal head and no lacing. Orange and a bit cloudy. Mostly lifeless and pretty unexciting looking.

Taste - And it falls flat here. That same orange brightness is muted, but still a bit present. Bready malts overpower it. The orange returns as quite a tangy citrus finish. Strange and perhaps unpleasant.

Mouthfeel - Heavy and it feels like 8.5%, no more or less, I suppose. Minimal carbonation doesn't help that.

Overall - Not exactly a bad beer, but lacking in any distinctive qualities. Not really having any problem finishing it, but not something I'd drink again.

Poured into a Kuhnhenn tulip. Pours a slightly hazy orange with minimal/no head, just a wisp of bubbles around the edge of the glass.

Flavor is lightly soured, with a sour citrus punch that draws in the cheeks. Oranges and lemons dominate. No hops present. Good prickly carbonation.

Overall not what I expected, but a pleasant surprise. Nice, balanced sourness, if it was intentional, which I don't think it was. But good none the less.

A - it looks like a cloudy sunset, orange in the middle with golden highlights. It is topped with an inch of off-white head.

S - It has a strong aroma. It smells sour. I get some light fruits and alcohol.

T - The first taste made me cringe. It is definitely sour. It has a sour pear taste? It is odd.

O - I think this is a bad bottle. I will have to read other reviews to see if my experience was unique or the norm. Regardless, the sourness made it interesting. After a while it became a decent sour. I am not sure this was the intention though.

As Beeradvocate referenced: "Duvel is the quintessential example of this style, and many others have tried to imitate it with similar references to the devil". Which is certainly the case for this beers name.

A&S: Right off the bat it was very yeasty (and bready but that comes with the yeasty territory) and fruity tones (raspberry). When pour into a glass it turns a little strong and actually smelt less like a belgian and more like a wheat. I also kinda smells like hard cider. Pours about a finger and half of white head when poured down the center. Head dies down to a thin layer in a minute. Transparent straw (with tints of orange) colored beer. Kinda dead looking (no carbonation bubbles present).

T&M: Doesn't really fell Similar to the smell: yeast is the main taste I'm tasting. There a strong element of fruitiness with a sour finish. Not a lot of hops going on in this one. Alcohol is hidden well. Low bodied, and on the low side of carbonation (as the look would suggest). I think this beer should have either have been more carbonated or have a more full body.

O: 7$ a bottle whoa! Not going to buy it again (it wasn't anything special), but it wasn't horrible.

another big thanks to bierenutz enjoyed from a kuhnhenn snifter.

a - brew poured a pale orange with a thin head that was gone quick, leaving just a ring on the surface. not much lacing to speak of.

t - comes alive in the taste. candied sugar big time. honey. oranges. golden ale on sweet tarts. definitely on the sweeter side for the style, but i like it. in 2 words...sweet tarts. nice. tasty. some wheat like characteristics in the finish.

m - mouth is a bit sour and prickly...easy drinker with a dangerously hidden ABV. bready.

o - overall, a bit of a surprise in a good way. sweet tart and candies all night long. has a nice fruity zing to it. enjoyable but don't trade your cellar for it.