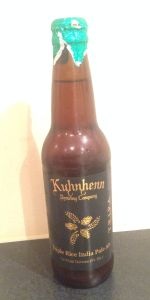 Notes: The newest member of the DRIPA family, this is the next step up– a Triple Rice IPA. Brewed as a bigger, more intense version of DRIPA, yet still employing the same proprietary cereal mash method, lending to the dry snap at the finish. The aroma is ALL hops; big sticky, citrusy hops. A nice malt sweetness occurs throughout the taste, with cracker-crumb notes complemented by the same huge hop characters in the aroma. This extremely limited beer has only been brewed once, so get it before it’s gone.
View: Beers | Place Reviews
Reviews: 31 | Ratings: 216 | Log in to view all ratings and sort
Reviews by MatthewPlus:

This pours a clear golden honey color with some white head that quickly dissipates. The appearence looks thin, almost like a wine. The aroma on this beer is outstanding. Lots of citrus, a hint on pine, and some melon. A little bit of malt sweetness is there too on a big whiff. The taste starts nice and malty with hops quickly assaulting the palatte. A wide range of hop flavor is present, citrus, mango, pineapple, and melon. A little bit of a grassy/pine flavor. Bitterness is balanced well with the sweetness, and it finishes super dry. Good brew, but price point is a little off.

Got from a Winter Solstice 4-pack, which was a hard-to-swallow $35. I knew I had had this before, but I wanted a 4-pack regardless.

Appearance: A clear dirty orange color that turns hazy once you get the full bottle into the glass (more on that in a minute, bruh). Small ring of a head, no lacing. Looks decent.

Smell: Well, this was just bottled a couple weeks ago to my knowledge, so yeah, crazy fresh. Sweet, juicy hops. A "candied hop" vibe. Very nice amount of malt. A little tropical, a little citrus, subtle pine... very aromatic and hop-centric. Great malt sweetness on the nose, too. Didn't smell that great to me at first, but it was probably 35 degrees. At about 50, it starts really opening up and smelling delicious. Best "triple IPA" I've smelled, and much more pleasing than something like Devil Dancer. Not much alcohol in the smell to my nose. Good stuff, to say the least.

Taste/feel: A little thin at first, but for some reason, getting 100% of the beer into my glass with the residue at the bottom included, it gets a little thickness. Moderate body all-around with a not-too-intense carbonation. This does NOT drink like a 12% beer... it drinks like an 8-9% imperial IPA. It's like DRIPA in that the ABV is incredibly deceiving. The taste of this is malty sweet on one hand, but very hoppy, bitter, and dry on the other. The hops are super sticky fresh and delicious: juicy with citrus, tropical, and some pine notes. The alcohol and warmth only really only start to slightly come out as the beer warms. Even still, it's stupidly well-hidden.

In the end, better than I remember. This tastes awesome right now. The hops are so fresh and the heat level is so nearly non-existent that this is a super (dangerously) drinkable IPA. Is it worth the ~$8.75 per bottle when bought in the '15 Winter Solstice mixed 4-pack? Probably not quite ... I could accept the premium and call this a fair price at about $6 a bottle, but it's super well crafted. This doesn't have the "je ne sais quois" that I find DRIPA has, but it's damn tasty and well-worth tasting: just drink it fresh, and at a not-too-cold temperature: I, too, would score this significantly lower if I had 1.) only had this beer ice cold and 2.) not gotten all of the sediment from the bottle into my glass.

Had on-tap at the Kuhnhenn Brewery as part of a paddle.

Appearance: Nothing like DRIPA (which is the natural comparison here). DRIPA has a yellow color, while TRIPA is brown. The lacing's pretty decent at the start, but doesn't last too long. A good looking beer... especially given the ABV of this one.

Smell: Outstanding... one of the best beers I've ever smelled. HOWEVER, not quite as good as even DRIPA. It's almost there though. TRIPA is chock full of tropical sorts of hops... it's absolutely bursting, and it's all you smell. That leads me to the taste....

Taste: Not what I was expecting. TRIPA smells like an absolute fruity hop bomb, but the taste is more malty than anything. Given the ABV, I guess this should have been expected, but I was somewhat bummed. Regardless of that, this beer tastes awesome. It tastes like the smell at the front with some bitterness, but the rest is loaded with malts to try and balance it out. It's not an overly sweet beer by any means, but it doesn't seem as balanced as its brother DRIPA. The biggest problem I have with TRIPA is the mouthfeel... it almost just sits and feels flat on the tongue just about as soon as it hits the tongue. Additionally, TRIPA has a slight alcohol warmth to it (really slight) that DRIPA doesn't have it all.

Well worth trying if you have the chance, but DRIPA is definitely the better beer.

2013 bottle (not a typo). Still pretty darn good. A little maltier than I remember. Still lots of citrus notes. Poured with plenty of carb still. No where near add boozy as it was. Wouldn't let this one go any longer, if you got one, drink it.

this years batch is outstanding! The nose so floral, the taste so sticky and clean. A dirty...dirty beer that will get you in trouble.

Appearance: pours a color halfway between straw an honey. little to no head, just a little white foam. strong clarity and good brightness. some lacing to legs to it.

Taste: opens with citrus, resin and some piney hops. sweetness comes through quite strong and is a little vanilla like. some biscuit qualities to it.

Overall: a solid Triple IPA offering. super intense bitterness and strength and surpirsingly only 11-12%. tastes like quite a bit more, which is a good thing for the style.