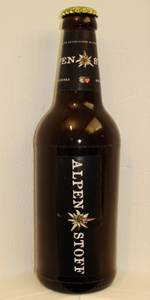 Quite a lot of foam over a polished golden body, very little carbonation visible.
aroma is bisquite and simple cookies
more pale malt and just a little hoppy bittereness. However, everything seems to be covered by a fog of copper. unpleasant.
Body is fine just a little burpy.
A weid metallic flaw in this beer or at least in my bottle either from the water or some fermentation problem. Or maybe its just me. - Just checked: other reviewers taste the metal as well but seem to mind it less.

Aroma: Dark bread and caramel dominate the aroma, with a backdrop of grassy hops for balance. There is a hint of earthiness, as well.

Taste: Opens with dark caramel and dark bread notes. AS the taste progresses, there are moderate earthy notes and some grassy hops. Finishes with a mild and lingering metallic hop note.

Drinkability/notes: Pleasant and very drinkable, it would pair well with chili, or savory soups or stews.

500 ml can Day 16 Avent calendar poured into a pint glass. Translucent golden orange with a three finger head that retains for the first quarter of the glass. Aroma is herbal/grassness and some weird scent I am not fond of. The taste is bread, metallics, and grass. Medium carbonation and a light mouthfeel. Not really much to it. I guess it would work for a session/summer beer.

Pours a dark brown with two fingers of off-white foam on top. Head retention is good with great lacing left behind. Aroma is pale, biscuit, bread, and earth malts. It has an earthy, bitter quality in the aroma. Flavor profile is sweet notes of pale, biscuit, and bread malts, with a bittering, earth malt finish. Mouth feel is medium-thick with a velvety, creamy texture. Overall, loads of malt notes, and while they aren't quite as well balanced in the aroma, carry a fine balance in the flavor profile.

From Costco. In Bavaria hefe glass. Playing Bioshock Remastered. Fairly standard, with a sticky, malty body but without anything standing out, nor any defects

A: nothing but malt

O: too similar to all these beers in the calendar with its apple grassy malt soapy flavoring. Can't wait til it ends. The first beer in the pack was delicious and it's been downhill ever since. Doesn't even come close to show off the amazingness of German beer.

From the Costco Advent box. Poured into a Pilsener glass. Great looking beer. Crystal-clear golden color with a thick and long-lasting white head. Some nice floral and orange notes on the aroma with some bready grain. The taste was crisp and bready with a slightly sweet malty note and moderate bitterness. Light bodied with medium carbonation. Enjoyable.

Served in a pint.

Taste: very creamy, like half and half with a shot of hops and malt.

Mouth: med to almost full, Light after taste which dissipates a bit quickly.

Overall: Definitely one of those hot weather beers which compliment a hard days work. Enjoy because I definitely did and always in a glass. Salud!

Part earthy and part beef stew to the nose. Pleasant.

Lightly toasted bread is the initial impression of the taste. Some milky flavors with a gentle sourness. The body is full but the carbonation is also high. The finish has a bit of alcohol to the tongue and a small amount of hop to provide balance. Long malty aftertaste.

The pour left a small amount of head that lingered for some time. While there is little to no lacing on the glass, some foam has lasted on the sides. It is very gold in color, right around a 6 on the SRM scale, and has high clarity.

I got very little scent from the beer right after the pour, and so gave it time to warm. Still, I do not get much. The sort of wet grain smell common with light lagers is definitely present, and sweetness can be detected. The flavor is similar- light, a little sweet and malty. Bitterness kicks in some after the swallow, and a fairly dry feeling is left in the mouth.

Alpen Stoff is a decent enough lager, but I might be suffering from light lager fatigue. They are not what I would choose to drink on most night, and certainly not this time of year. If I come across this beer again, I'll give it a second try, but I'd be surprised if my opinion changes.

Hazy gold in the glass with a thin head, poured from a can. Definite cereal aroma. Nice, smooth flavor, understated with light malt taste and no off putting aftertaste. the aftertaste here is a nice fading of the malt tones. Very nice, smooth beer.

From the Costco Beery Advent Calendar. From the can, it pours a golden color with a nice white head. The head lasts for a while. The nose is the usual export cereal/malt scent. The mouth gets a nice pleasant malt flavor. Enjoyable and repeatable. Yum!

Part of the Costco German beer Christmas box. Enjoyed it with Mexican food. Light, refreshing, went well with the Mexican food. Would buy on its own. A 7 out of 10.

A - Pours a traditional light lager gold with lots of sediment haze floating in the glass. An aggressive pour yields over a finger of frothy soapy white head with nice staying power. Some moderate thin bubbly lacing left behind. Looks very nice for what it is.

S - A simple, yet inviting aroma. Creamy, with notes of sweetness and grains. Earthy & grainy, but not what I would describe as corny or husky. Perhaps a touch of floral hops? Oaty.

Overall, one of the genuine Dortmunder / Export lagers that I've had. Recommended.

500ml can, day 3 of the 2015 Costco Beer Advent Calendar - the name of this brewery reminds me of watching The Man in the High Castle television show of late. Also - 'das bier der berge' - look out Kokanee, old-world mountain brew!

The carbonation is quite light and ineffectual in its timid frothiness, the body a solid middleweight, and generally smooth, just a wee earthy hoppiness marring the occasion, as it were. It finishes off-dry, that cereal graininess persisting like a boss.

Overall, an easy-drinking, kind of no-brainer German lager, the extra bit of ABV not at all noticeable. Simple, maybe, but I suppose not everything has to blow one's mind when kicking back after a breathtaking day in the Bavarian Alps.

500ML can with best before date of 090616 on bottom. Clear dark gold color with 1in foamy white head. Smelled sweet and slightly fruity with metallic touches lurking underneath. Taste was sweet with light fruit (apple) notes and cereals. Feel was crisp, clean and dry. Overall, tasted better than it smelled and was easily quaffable.

No major flaws but nothing distinctive or memorable. Lightly sweet up front but then mild-moderate bitterness all the way into the finish. Complex aroma and generous hop load for style.

Pours well with finger and a half thick white head, decent lacing. Great clarity and a bit darker than what I'd call a typical Export.

Medium bodied taste, sweet and cereal upfront, and has a slight lemony kick.

Not too much of a complex beer, but quite refreshing.

A: This beer poured with a nice golden amber appearance leaving a small 2 inch white head that seemed to dissipate soon after pour, it also didn't leave much lacing throughout the drink either.

S: The smell of fresh hops comes to mind with the first sniff, subsequent smells didn't produce anything else that I could recognize.

T/M: The taste was not overly complex...barley was the first and only thing that came to me. It was very well carbonated and it had a dry aftertaste to it.

D: An average beer to try out once, but not something I would drink daily.


Alpen Stoff from Bürgerbräu Bad Reichenhall
Beer rating: 79 out of 100 with 59 ratings