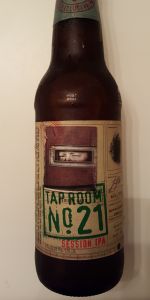 Notes:
View: Beers
Reviews: 27 | Ratings: 99 | Log in to view all ratings and sort
Reviews by clager:

Taste: Initial nice bitterness with earthy, floral, and bready notes with a citrus finish. Well-balanced mix of bitterness and flavor. I think the start and finish were the part that got me hooked.

Overall: Enjoyed this much more than expected after reading others' reviews. Did not experience the maltiness that others expressed and is usually a turnoff for me as it can cause kind of a metallic taste. This, however, had a nice bitterness up front and flavorful citrus finish.

Poured from a 12 OZ bottle into a pint glass. The appearance is a light orange with some amber highlights and has a small white head. The aroma is citrus and is fairly nice. The taste has mild hops and citrus. The best beer I have had from World Brews.

A little like Russian Roulette, sampling these Tap Room 21 brews. Let's see what I hit this time. Poured into a snifter.

Pours a clean copper, with a surprisingly large head that holds fairly well. Not a bad start at all., actually!

Aroma is... uh... aroma is... um... there is no aroma. Okay, that's slightly overstating it, but not by much. If I stick my nose really deeply into the glass, I get a faint, candy-like aroma, a bit like smelling an empty can of Mandarin oranges a couple days after you've eaten them. But that's really it. No hop, no malt, nothing but that oddly sweet citrus, and even that is so faint you have to convince yourself it's there.

And the flavor? Well, it's a bit more pronounced than that aroma, but emphasis is on "a bit". There's a small citrus like flavor, very little bitterness, and then, unfortunately, that astringent metallic flavor I got from the witbier this brewery makes comes crashing in. There's a sharp, chalky, soapy flavor which follows that, and then it all disappears, except for the lingering metallic flavor. There's nothing way off (if you don't count the fact it really shouldn't taste like metal or soap), but it's just blah. I not only can't say this is an IPA, I'm seriously hard pressed to say this is a beer. It isn't bad, per se, it just isn't anything at all. I'm not sure that's better, to be honest. There isn't even enough here to hate.

Mouthfeel is "Perrier" like. Thin, biting, a bit chalky. Not at all what it should be, either.

I try to be positive in my reviews. This... I just can't. This is badly made. Again, it isn't "bad" in the sense that there are a whole lot of off flavors or aromas. There just isn't anything at all here. It's slightly citrus flavored carbonated water with a really high mineral content. I cannot with a clear conscience recommend this to anyone. I got it as a gift, and I always appreciate gifted beer, but this is just poorly made. Avoid.

A - Very light amber with a decent enough head.

T - Fruity with a hint of malt, but somewhat watered down.

M - Somewhat thin although the carbonation is decent enough.

O - I won't be buying this again. I expect a certain intensity in both the smell and taste from an IPA and this one misses on both accounts. If it was marketed as a "Light IPA" I would be OK with it, but there are so many good choices in IPA's that there is no reason to settle for a pretender.

If u can find this for free and the only other option is bud lite this is worth drinking. Otherwise this is horrible.

2.99 a six pack. But it smells like cough medicine. It doesn't taste as bad as it smells, but it doesn't taste very good either. It reminds me of my first rookie Homebrew IPA..some stuff is right about it, but a lot of it is wrong. It's drinkable though. Maybe that's it's best quality. Drinkable - as in able to drink, but not want more. But if you're on a budget like I am, you can't complain at the price point. And this batch is 6.9%.

This is a good beer.
That being said, relative to other IPAs, this is a bit on the modest side (flavor is weak, not as hoppy as usual). This IPA is smoother than I'm used to, which is a bit surprising. The good thing is this: if you prefer IPAs and you're with a group of people who prefer ales, this may be a good meeting ground (IMHO).

Has a malty after taste that is not the best