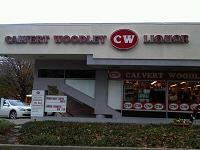 Calvert Woodley has become a revelation on the beer scene under their new beer director Randy. Upon walking into their beer aisle you will immediately be stricken by the vast array of superb options. The locals are undoubtedly well represented with many of the DMVs finest options.

The local breweries are met with an incredible selection of American and international brews. The west coasts heavyweights (Firestone, Alpine, Lagunitas, Ballast), the Midwestern greats (Founders, Great Lakes), and the east coast staples (Maine Beer Co, Allagash, Evil Twin, Weyerbacher) and every region in between have impressive representation.

As if that amazing selection weren't enough the prices are some of the lowest in all of DC, MD, and VA. From bombers to six packs, everything has a reasonable price tag.

This is a phenomenal beer store with a beer manager who knows and loves the product and is incredibly genuine in his approach to a business he loves. I would absolutely recommend Calvert Woodley to newcomer and beer vet alike!

I've been an "occasional regular" at CW for a couple years, and it had always been one of my favorite places to go for liquor - good prices, good staff, good selection. They also have a small deli attached with some wonderful cheese and meats/charcuterie - best chopped liver I've had, and their mystery cheese grab-bag is cool, because they just take the leftover ends and pieces of cheese wheels and sell them for dirt cheap.

But until late last year, their beer selection was pretty lackluster - like, grocery store level at best. Then, Whole Foods fired their beer buyer, Randy, who found a new home at CW and has transformed it into one of the best beer destinations in the city! Seriously, I went in there for the first time in a few months and didn't recognize the place - there was a whole wall of bombers, half of which I'd never heard of and the other half made me drool: Clown Shoes, Evil Twin, Bruery, Avery, Allagash, Omnipollo, tons of mead, and on and on. It's small, but they pack a lot in there, with probably hundreds of SKUs. But their prices are almost more exciting than their selection; they're already very fair, and Randy puts so much cool stuff on sale all the time for like 30% off, it's stupid not to buy it!

I'm a beer buyer at another store too, so Randy and I hit it off pretty well, but he seems like he'd be happy to chat beer all day long if he had time. If you go, try to call and find out if he's there just because he's such fun to talk to, and really knows his stuff (the rest of the staff still seem pretty new and unfamiliar to the beer game, but know wine and spirits very well). He told me that he tries to get in a few new beers every week, so there's really very little reason to go elsewhere (aside from it being way on the other side of town for me). But seriously, check this place out if you're at all into great craft, prices, service, and chopped liver!

I've been to Calvert Woodley several times in the past, and while their wine selection has always been top notch, their beer selection had never been much more than mediocre. And then there was Randy. On a whim, I walked in to purchase a bottle of wine, and was absolutely blown away by the beer selection. What was once mediocre is now world-class, and Randy is always happy to talk through the beer on hand to help you find what you like.

If you're a craft beer person, go stop by and see the selection.

I didn't go to CW before Randy became their beer guy so I can't comment on the older reviews, but CW is now one of the best (if not the best) place to go for beer in DC. Anyone who visited P Street while Randy was there knows the connections and service he brings to the table. Pay CW a visit. You owe it to yourself.

This store has morphed ever since Randy arrived for P Street Whole Foods. Amazing selection of beers, including a rotating selection of limited and hard to find products. Extremely well staffed with numerous employees walking the store asking customers if they need help. Great weekly sales. Overall, it is now one of the best craft beer stores in the DC area.

One of the finest stores in the area. This is the store to keep your eye on, considering they recently hired Randy (former Whole Foods purchaser on P Street). If it's anyone that can get exceptional or special release beers in, it's gonna be him. Now they arguably have the best selection of quality(!) craft beer in the area and I imagine we'll only see improvements with time.

Since Randy has arrived from Whole Foods P Street in November, he's transformed this place into arguably the best beer store in the area. Great prices, great service, great selection of cans, bombers, etc. If there's a limited release beer, chances are they're going to have it along with the best selection of everything else.

I think in the past the beer selection was average, but they have a new beer buyer, Randy, previously of Whole Foods P St. The selection now is second to none and the service is exceptional. Calvert is now a must stop beer destination in DC.

A very good beer store with an above average selection of beer, which covers all the basics. They try to stay on top of their game beer wise and have hard to get beers which sell out very quickly

This liquor store got pretty negative review from BA-er in the past, but I'm here to provide a few comment of the store condition in 2015.

As the other reviewers said, CW does not have many type of craft beers, and only the mainstream Belgian like Chimay, not even Rochefort. It is mainly a wine and liquor store, but with seemingly cheaper price than other places; for example, a bottle of Three Philosophers only costs 9.99 compared to 10.99 at other places.
However, when I was there 2 days ago, CW was having a huge selection of Samuel Smith, with Chocolate Stout, Nut brown ale, oatmeal stout and other. It is much more extensive than any other Samuel Smith selection I've seen in DC, so that is CW bright point in the beer department.

Some time ago since the written review below, the experienced beer seller moved on from working here. So much of the same comments I wrote below still stands however I have lowered scores for service slightly.

With new beer beverage director hired this is now a true destination from what would be of the past. While the excellent wine and cheese counter service still exists, as does fantastic spirit selection the beer quality has DRAMATICALLY changed.

Excellent selection, a full varied cold case. With DC laws there are also better options to buy singles here and have items taken that would not be possible in mass supermarket destinations. THe selection is diverse in bombers, sixers, and to some degree singles.

THere are a lot of speciality items that can come in as well, and the director is fully knowledgeable about what customers want.

CW is wine-focused. Don't go out of your way to go here if you are looking for a great selection of hard to find beers. That said, the pricing is reasonable, and better than most grocery stores in the area. The selection consists of a smattering of macro brews (US and Euro) with a few smaller, mostly East Coast craft brews. I'd say the selection is slightly better than the local Safeway, Giant or Target, with better prices, but go to Chevy Chase or Rodmans for better beer options. CW's emphasis is wine, and in that regard CW has no peer D.C. It also has a great deli.

OK. Seeing this on BA is about to get on my last nerve.

Located on extremely busy Connecticut Ave., one starts with the fact that the parking lot here is tiny, and so one often has to wait in line to use the parking lot (backing out into Connecticut Ave. often enough). I guess it's worth the wait for the outstanding wine selection and high quality deli, but not for the beer selection. As the previous reviewer noted, this place has a few different Belgians, as well as few regional favorites (Victory and Troegs, and I'm really not sure what else). However, it's a pretty unimpressive selection, and it's apparent that CW has beer only for wine consumers who want to pick up a 6 pack or two, along with their wine pick-up, for the few token beer drinkers at the house party. It's a completely thoughtless, indifferent selection, and clearly reflects the mindset of the staff here (who near as I can tell, know nothing about beer - they tend to know a great deal about wine).

The sad thing is, there are a number of very good beer stores in the area (Chevy Chase is just a mile or so down the street), so it's ridiculous for this place to be on BeerFly. For wine, I go here all the time, but this is BeerFly, not WINEfly! Get it?

Wow! A fine wine store selling a few dozen 750s of mainstream Belgian beers and cases of low end, uninspired beers. The main business seems to be sale cases of Sam Adams and that ilk. Not much selection and no one there who has any knowledge of beer. Pretty bleak...

It is convenient to the metro (across from UDC), but why it is even listed as a beer store is a head scratcher. I have seen 7-11s with better selection.

Unless you are looking for wine, keep looking...


Calvert Woodley Liquor in Washington, DC
Place rating: 4.37 out of 5 with 23 ratings