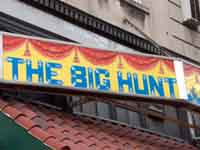 View: Place Reviews
Reviews: 41 | Ratings: 57 | Log in to view all ratings and sort
Reviews by djhowell:

The Big Hunt does not lie about what it is-it's a dive bar and it doesn't try to be anything else. It looks beat up inside but in the lovable way that most dive bars are. The beer selection is usually quite good, but don't expect the frills of many nice craft bars like proper glassware and in-depth discussions about beer profiles with your server. If you're looking for a no-frills, good beer drinking experience then this is the place to be.

A bit frayed around the edges, bordering on being a dive, but in an excellent location. Small but good tap list, noisy, busy, bustling, nearby. Neighborhood bar vibe.

Head Here W/ Bro In Law for Beer & Burgers. What More Could You Want?

Shootpassbeerme from District of Columbia

HuntDaddy540 from District of Columbia

Stopped in for a bite to eat and a beer while in the area. 30 or so drafts, mostly craft selections from some of the larger breweries like Allagash, Stone, Schlafly, Oskar Blues. The cask was not working, so no go for any cask ales. Bar food was pretty good. I had a cheeseburger and fries. Dimly lit and a bit of a dive appearance. Staff was friendly and service was fine. A decent bar, but I don't feel compelled to return.

This place is way underrated here on BA. We hit it last night after many hours at the amazing Churchkey and it was just what the doctor ordered. Churchkey has an upscale vibe, The Big hunt is more of a dive bar, but with a short list of world class beers. We found a spot right in the center of the copper bar and had a great conversation with a beer-smart bartender. You can say a lot of great things about Churchkey but the word "fun" doesn't come to mind. This place is fun. A great little neighborhood pub with lots of character and good beer. If I lived in the area I'd likely become a fixture at The Big Hunt.

Cheater Pints! All the beers are served glasses with extra thick bottoms.

So I was here to meet some friends last week. I walk in and the place is a lot bigger than I had expected. Tables that go all the way to the back, and there is another side with pool tables, another bar, and even more seating.

I was able to walk up to the bar and get a beer almost immediately, even though the bar was full. Their selection was pretty good, even having some stuff from Baltimore that I don't see and Bell's.

We had a big table and the server was pretty good in the beginning, until it got later and apparently she was the only server for the entire bar. By the time we left, she was like a chicken that had their head cut off. She told us that she couldn't separate out our bill because she was too busy.

It also was a Wednesday and they had a dinner special, a burrito. I ordered it and it arrived about 15 minutes later, room temperature. It wasn't even slightly warm.

Would I come back? Probably not. The service was sub-par, the food wasn't even warm, and again, cheater pint glasses. When you have to pay $6 for 12-13oz. of beer, plus tax and then tip on that, it is very expensive.

Visiting DC and were in the area with some friends. It was her recommendation and she thought it was closed when we walked up. Turns out it was just dark and dingy.

I have been to a number of bars that look crappy from the outside (and inside) that turn out to be real hidden gems, diamonds in the rough, or other cliches. This falls short.

I ordered a "pint" of Racer 5. The "pint" arrived quickly, and I quickly realized that my "pint" was more likely 14 oz. given the inch thick glass bottom. I refused to order another given this discovery. If they had just said "14 oz" on the menu I probably would have had ordered another beer. But I don't like being lied to. Prices are decent for a true pint, but a little high for the short pour.

The was not quite right. I have had Racer 5 before and this barley tasted like it. I would have to guess that either the beer was quite old or the lines were dirty. Not impressed. DC is a long way from CA so maybe it was not handled well en route. I usually give a bar the benefit of the doubt and order another beer, but I was not interested (see above).

Probably not a bad option if you are in the area in looking for a quick beer. But, it is not somewhere I would frequent often if I lived in the area.

Was here while in D.C. for a conference. Went with my advisor and some other old graduate students of his.

This is definitely a dive bar. Dirty, old, and crumbling with a dingy bar, dingy stools, and dingy lighting. Kind of homely but exactly somewhere you'd bring a date.

Quality was decent except for the fact that their imperial stouts were served a bit too warm and everything seemed to be served in pint glasses. Lost points for lack of attention to glassware.

Service is decent. There was one waitress and only 1 bartender when we were there so there was a bit of a wait considering the place was pretty crowded. However, considering how packed it was, there's not much to complain about.

Selection is pretty solid. About 10-15 items on draught as well as a some bottles. It seemed like they also brewed their own beer? Which is interesting even though I didn't end up ordering any of the house offerings.

A decent place and one that's quite lively and homely if you're into the Dive bar scene. I went with people who knew the area quite well so maybe there's some sentimental feelings there but overall this is a place I'd recommend, just don't make it the first bar you visit in D.C.

Tap list isn't too bad, lot's of decent choices from the region, and few beers brewed specially for the bar as well. I was able to try a Founders CBS on tap. I believe they had KBS too! I enjoyed my time at this establishment. From the door, the place looks very small, very dark, and very smoky. It is, however, two and a half flights, the ground floor bar is the largest and most crowded, the second floor consists of a smaller bar (both with many regional and seasonal beers on tap) and a pool table, also gets crowded, and half a flight up is a deck that is open year round with large tables and open skies. Service is decent.