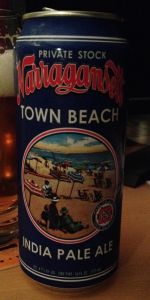 Notes: An easy drinking IPA that's perfect for a day in the sun. With notes of grapefruit, lemon, and a touch of pine- this beer is practically summer in a can. It's bright, crisp, packs a light citrus kick from the balance of hops, and with a lower ABV, you can have a couple and still play volleyball. The Town Beach Day Pass IPA is brewed with two-row, Carapils, Caramel 20 and Wheat Malts, and Citra Hops. It is then dry-hopped with Citra to really drive home the aromas of passionfruit and grapefruit.
View: More Beers | Place Reviews
Recent ratings and reviews. | Log in to view more ratings + sorting options.
Ratings by chicagoish:

Weird one. Looks great but taste is strange....kind of between an IPA and a garden variety Euro lager.

So, my sister is getting married this weekend in this little harbor town in Maine. I picked up numerous brews for the occassion and this is the first one up. Packs surpising bitterness into the gold hue and piney nose. Earth and medicine notes combine for some solid resin and oily texture in this one. I like Narraganset but isn't really expecting a ton here so consider me pleasantly surprised.

I have one word for you...cans. Big ones A session IPA that works for the beach. Low alcohol but tastes like a regular IPA. Not a palate ruiner either. Good job!

L -- Orange/golden amber body with a large, dense, off-white head produced with gentle pour out of the (nice looking) can.
S -- Grassy, herbaceous, and molasses-sweet. Not pleasant
T -- Largely follows the nose, with a slight metallic bite.
F -- Watery, strange flavor balance, weak mouthfeel.....
O -- Hands down the worst Narragansett offering I've had. Unlike a lot of their products which aren't the best, but are very good for the price/nostalgia, this one is just a bad attempt at a British-style IPA. Could be because the can is old – there's no indication of canning date beyond a cryptic alphanumeric string on the bottom of the can.

Notes via stream of consciousness: Decent enough looking packaging. And the price is OK too. It pours a clear amber body beneath a two-finger thick head of frothy off-white. The aroma so far is not impressive. Once the head dies down a bit I'll try again. Nope, it's still the same. Let me check the can... yep, it says "India Pale Ale". It smells more like an English pale ale to me. It's got that mineral edge, which I assume is coming from the yeast, a bit of caramelish malt, and very little hop character. Ahh, I just realized this is brewed in Rochester, NY which means it's contract brewed at Genesee (formerly High Falls), I had no idea. Anyway, the hops that I am finding are mildly floral/grassy and just slightly citrusy fruity. Disappointing. The head has dropped now but it maintains a solid surface covering, and it's left some nice, wide, craggy streaks of lacing about the glass - at least it's go that going for it. On to the flavor... it's got that same mineralish character coming through along with the same floral/grassy, and now leafy hops with just a touch of citrus with lemon and orange. I find it more English than American to be sure. The malt is thin in flavor but caramelish, and the hops are no fuller, so it ends up in balance on that end. The bitterness however, given the malt base that's there, seems a little much ~ not that it's too much for an IPA, just that there's not enough malt to make it work. And it's really not that bitter, which is the interesting part. Oh, wait, have I found the excuse, or reason, for this? Haahaaa! It's just 4.7% ABV. What a joke! This is no India Pale Ale unless you're going by English standards of the late 70's. No, this is a pale ale at best, which offers a slight bit of citrus to fit the current market, and a little more bitterness than is needed. Well, it's got a dry, bitter, and leafy/herbal finish anyway! This is a case of mislabeling, and in my opinion, a shame, as the base beer with just 10 IBUs less would make a very nice "premium" or "best" bitter. As it is it's just sloppy. Medium-light in body with a moderate carbonation. Not very good, and certainly not to style.

A: Golden amber in color with a light tan head.

S: Grapefruit, and a touch of pine with a little orange peel, and a good hint of caramel.

T: Grapefruit, and pine, with a fairly assertive bitterness, and a good dash of caramel.

M: Medium feel with a moderate amount of carbonation.

O: Overall a bit of an older school version of an IPA. The bitterness is a touch rough, but in general, not a bad beer. Not amazing... bu not bad.

(As "Town Beach Day Pass IPA"). Purchased as part of a Narragansett variety 12 pack in Brooklyn, NY for $16 plus tax and deposit.

APPEARANCE: Pours a typical copper body and off-white head. Head has some nice froth to it and lasts a good while (~8 minutes), but at its scant 4.70% ABV that doesn't impress. Filtered and clean in appearance, but not at all vibrant or lively.

Aromatic intensity is below average. Not at all pungent, especially for an IPA. Malts are on equal footing with the hops, when hops should be clearly dominant. At best, this aroma indicates an English pale ale.

Pretty off-putting, to be honest. I actively dislike this. Poor depth of flavour. Painful simplicity. Horrid execution given the intended style - and even outside style conventions it's pretty rough. I find some metallic off-flavour as it comes to temperature as well.

Finishes over-bitter, leaving the drinker hesitant to take the next sip.

TEXTURE: Smooth, wet, medium-bodied, somewhat soft, well-carbonated, stale, weak, thin. Nothing about this texture suits the taste whatsoever. Not refreshing at all.

OVERALL: A sad attempt at an IPA that tastes like an English pale ale left in a hot Summer drawer for 14 months before being discovered and then consumed (and that may be the only Summer-y characteristic it possesses). Tough to drink given its horrid taste and poor quality (even in spite of how thin and low ABV it is). Dreadful work.

Pours a very clear, bubbly amber color with minimal head. Smells light with hints of rose and orange rinds. Floral flavors of hops and citrus are balanced by breaded malt. This beer carries a great bang for its buck.

16oz. pounder served in a nonic. Pours a lovely burnished gold with a translucent clarity and a tight, quarter inch, off-white head. Nose expresses biscuit malts and a hint of citrus and pith. Taste follows nose with the addition of a light earthy/herbal quality. Mouthfeel is light in body with a lively carbonation that leaves a slight residual prickly across the tongue between quaffs. Overall, a solid session IPA and you can’t beat the pounder format.