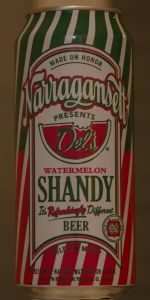 The Del's Watermelon Shandy brings natural watermelon flavor, our award-winning lager, and just a touch of sugar together for a stand that tastes as refreshingly different as a New England summer.

A pretty darn good watermelon ale not too tart a tad sweet and you can still taste the bready malts underneath so its not just a malt beverage. Not sure if I would get it again but for the novelty its pretty decent.

A: Pours a golden yellow color with 2 fingers of head that fades down to a thin cap

O: Pretty much what you’d expect from a Gansett lager mixed with some watermelon and sugar. Nice on a hot day

Jolly Rancher watermelon in a can? You betcha! Del's Watermelon Italian ice collaboration with the historic brewer Narragansett is a match made in heaven - alongside now-famous Del's Lemon shandy - for one of the best summer beers to enjoy.

There is a faint candy-like watermelon scent with esters of beer that radiate but the what might be faint in smell makes up for in taste. Overall this is a more balanced, still mildly carbonated shandy with lesser acidity than others on their product lineup. The mouthfeel is slightly above average and the finish is wet and sweet. Tasting notes include watermelon rine, sweet sugar, and the traditional Narraganesett lager with such an outstanding finish.

Of all the fruit flavors to go in beer, watermelon is not one of them.

This was a difficult beer to drink. The watermelon syrup taste was too strong and reminded me of soda more than beer. I will not purchase this beer again. I’ll end on a positive note by saying my 22 year old daughter loved it.

Man, did I ever blow it a week ago! It was the ocCANsion of my weekly #WatermelonWednesday in response to #BumptheHump & I not only Crack!ed it open without checking to see if there was an approved pic, but then I somehow deleted my review! 8=O I had picked up my CAN at the Universal Package Store in New London, CT while up there for a Navy reunion & I despaired that I might not be able to replace it. 8=( Reiker Bottle Works to the rescue! I had to take a sixer, but I am taking several to a bottle share this weekend. Phew.

From the CAN: "Made On Honor [-] Sold On Merit"; "Narragansett presents Del's Watermelon Shandy Beer"; "It's Refreshingly Different".

I already knew what to expect so I Crack!ed open the vent & gave it a heavy-handed Glug. Man, did it foam up nicely, forming two-plus fingers of dense, foamy, rocky, bone-white head with excellent retention. Color was solid Gold (SRM = 5) with NE-quality clarity, summoning forth The Gelt Gang of Midas, Mammon & Croesus, all desirous of a taste. In the meantime, my kitchen smelled like I had been cutting watermelons into smiles. I was smiling since it smelled like real watermelon, NOT something made in a chem lab. The CAN read "Beer with Natural Watermelon Flavor" & while I am often dubious, I bought into it in this case. Nose was full-on watermelon without being sweet or cloying. Mouthfeel was medium, but very, very soft on the tongue. The taste was watermelon, actual watermelon, not Jolly Ranchers or Bubble Yum or any other CANdy. It tasted like biting into a slice of watermelon in the Summertime, after a repast of corn & tomatoes, all homegrown. It made me long for my childhood. Finish was in that Twilight Zone between semi-sweet & semi-dry, but it was about as refreshing a beer as I have had this Summer. I hope that people dig it this weekend! YMMV.

I somehow overlooked this for a while and I have reviewed quite a bit of beers from 'Gansett. Pours a light, light reddish-blonde hue with a good head into my glass. Strong, sweet watermelon in the nose. The label says natural and I agree. There's the right amount of watermelon on the tongue, never cloying and finishes super clean. This would work well as a lawnmower shandy along with the Lemon variant. Get it!