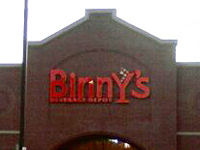 View: Place Reviews
Reviews: 40 | Ratings: 172 | Log in to view all ratings and sort
Reviews by fredmugs:

7/2/18 - Larger than average Binny's, home of the annual Goose Island Bourbon County release. Very good beer sales on a regular basis, haven't been to a tasting but this location has several throughout the year. Across from the Goose Island brewpub, convenient for to go purchases after hitting the pub. Overall good store for very good beer selection and pricing.

Great place to go. The bar in the back is one of the coolest bar spaces in the city.

The store is the biggest I've ever been to. Selection is massive. Lots and lots of samples.

This place is amazing. The beer selection is ridicously huge and the staff is always willing to help you find something. The prices are definetly reasonable. This is a definite stop for me when I'm in Chicago.

What is there to say? This store has one of the best beer selections ever. Amazing selection and variety. Reasonably helpful staff. Prices are standard. I don't get to this location often, but when I do I'm never let down.

This is probably the greatest beer selection in one single place that I have seen in my life. The selection is humongous and classified by country. It is almost to the point where there is too much beers that it makes it hard to figure out what to buy. The tap list at the back has a great selection. Prices are reasonable and there is ample parking.

This has been my go-to store for going on 22 years.
Who else can say that ?
In the previous century, I lived two blocks from this store; then known as "Sam's" and, generally speaking, was the best store in Chicago to buy wine and beer. It probably still is.
If that wasn't enough, they opened up a Tasting Room and taproom; quite a large space, originally a powerhouse 3 stories tall. And now a very comfortable space. Why is this not listed separately from the store... possibly because you have to walk through the store to get to the taproom. Interestingly the mix of business in the taproom is about the same as the store (Told to me, if I recall correctly: 50% wine, 30% beer and 20% spirits.)
(Across the street is the brewpub that started Goose Island.)

Binny's staff used to be great; quite patient with me when I brought in obscure lists. I knew the staff and they knew the lists. In the last year, there has been staff turnover; they still want to help, but probably less knowledgeable.
Binny's Lincoln Park is regarded to have the best selection, although the Roosevelt store is thought to have a better selection from the Continent.

Located behind the Goose Island brewpub, this is the biggest Binny’s EVER! Seriously massive, almost overwhelming. I was greeted with an inordinate amount of Surly Furious as I got in, just past the registers. Then how about some Abbaye de Bon Chien, Amager, Mikkeller… Hoppin Frog barrel-aged Naked Evil, Vivant from Michigan, Founders, Slapshot and all the Chicago brands. They have at least seven or eight aisles here, all full of beer. I wish I had more time to browse and be amazed, but I will definitely come back next time I’m in Chicago.

Great selection. always make an effort to stop at Binny's when in the area and they always seem to have something that I'm looking for when i am there. Friendly knowledgeable staff as well.