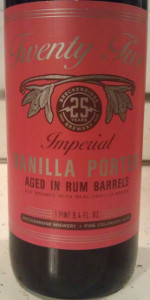 Notes:
View: Beers
Reviews: 31 | Ratings: 117 | Log in to view all ratings and sort
Reviews by Keepnitrl:

This is one of my all time favorite beers, it pours dark with a nice brown lacing. I think you have to love Rum to like this beer, I happen to love rum so it's perfect for me. If you don't love rum, stay away or you will hate it. This isn't overly sweet, but sweet enough for it to be thought of as sweet. The beer imparts a wonderful vanilla/rum flavor while you can still taste that it is very much a robust beer.

Well worth the price.

Bad batch or something. Sour. Nasty.

Taste: Sweet rum and vanilla initially, with some chocolate. The combination of these flavors creates a very unique taste about midway through, almost like cheesecake. It lasts well beyond the back end, and lingers in the aftertaste. Somewhat boozy, but by no means overpowering.

Overall: Been wanting this since I saw it at my local beer store, but was initially scared off by the price tag. Bravely returning one day resulted in me leaving with the very last bottle there. This was one of my wants as homage to the first craft beer I ever had, the regular Vanilla Porter. This ended up being a very unique beer, in terms of its taste, but the feel seemed too thin for its style. Glad I splurged and got it.

Definitely started off on the wrong foot with the cork breaking (seems to be a common issue). This was a much improved version of their standard vanilla porter. Look was pretty normal, dark brown with a half inch tan head that dissipates quickly. The smell is predominantly rum and vanilla with a small sampling of coffee. The taste is an initial strong blast of vanilla surrounded by the rum flavoring that lingers, but is not overpowering. As the beer warms, the vanilla is less obviously while the rum is more prevalent throughout. The feel is warm from the rum with a solid body over the tongue. Overall an enjoyable adaptation to their staple vanilla porter. The vanilla and rum combine for good mix that isn't overpowering. As a onetime brew, worth getting while it is still around.

Very solid variation of the Vanilla Porter. Very nice bottle, but used a wine cork opener due to the previous reviews. Dark color with light tan head. Smell is of vanilla and a slight bit of rum. Taste starts with vanilla and rum, with a light coffee finish. Mouth feel is a little light, but as expected coming from the vanilla porter. Overall, a very nice beer. A little expensive but worth the try.

look:dark as burned motor oil with a cinnamon color head.
smell:smells like vanilla bean and butterscotch candy.
taste: butterscotch candy
feel: feel pretty good on the tongue with the sweetness.
overall: its different and could only drink 1 glass of it.

Looks like cola, not quite black, but dark red, with a large light tan foam.

Smell is meaty, hot booze with spicy must, raisin, apple and rum.

Taste is almost tart with raisin, green apple, hint of roast, and cola.

Yeah, I think this is infected but considering it's age it must be barely so, as it's taking a good long while to become drastic.

I love dark beer. This one looks so wonderful. The smell catches you off guard, very strong vanilla up front. The taste definitely shows the rum barrel aging. A little thinner than you expect but not watery. Overall just very delicious and as a previous review said...enjoy with caution.

750 ml caged and corked bottle, Vintage 2015 stamped on the bottle. Served in a snifter, the beer pours very dark brown with about an inch tan head that stayed around for a little while. There's also a decent amount of lacing. The brew smells like rum, vanilla, chocolate, caramel, and some coffee and dark fruitiness. Taste is similar to the aroma, there's rum, vanilla, molasses, dark bread, chocolate, caramel, and an earthy flavor noticeable. It's a mostly sweet and rummy smelling and tasting brew (but the sweetness isn't overpowering). Mouthfeel/body is medium, it's smooth and a bit creamy with a moderate amount of carbonation. I thought this was an enjoyable rum barrel aged beer, I wouldn't mind trying this again in the future.