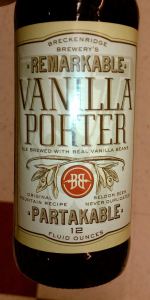 Notes: Deep in the jungles of Papua New Guinea and Madagascar grows the perfect ingredient for an extraordinary Porter brewed in Colorado. Breckenridge Brewery’s Vanilla Porter. An ale that has all the chocolate and roasted nut flavor of a classic Porter, with an enigmatic surprise thrown in for good measure.
View: Beers
Reviews: 1,188 | Ratings: 4,553 | Log in to view all ratings and sort
Reviews by thebeers:

Dark brown with a plum-colored tint and thin, off-white head. Smooth, roasted malt aroma, both nutty and creamy, with a hint of coffee. The roasted malts are more hidden in the taste, with the vanilla and stone fruits more prominent. Medium bodied. Would like a more malt-forward taste, but the amount of vanilla in there is just about perfect.

I have recently been avoiding flavored beers. The few that I have had, from chocolate stouts, grapefruit IPAs to, yes, vanilla porters, tasted artificial and the added flavors overwhelmed the beer they were supposed to enhance. I tried this at a restaurant on a whim and enjoyed it. The vanilla is not all powerful, and it allows the porter taste like it should: only with a whiff of vanilla in the nose and on the tongue!

Pours a semi-clear dark brown color with a 1/2 inch tan head that fades to an oily film. Thin rings of lace line the glass on the drink down. Smell is of dark roasted malts and vanilla beans. Taste is of dark roasted malts, vanilla cola, and vanilla extract. This beer has good carbonation with a soda-like crisp and clean mouthfeel. Overall, this is a good porter with some unique vanilla flavors. I would definitely get this one again. My first beer from Breckenridge.

A solid drinkable Porter, a beer I'll definitely buy again. However, I didn't get a taste or scent of vanilla. This Porter has a wonderful dark color, with a pleasant coffee / bitter smell. This tasted, like it smell. For me it was very balance.

Pours a medium to dark brown with a half inch tan head that was poorly retained and left a couple rings of lacing. Smell is vanilla, coffee and chocolate. Taste follows the smell with vanilla first and foremost followed by coffee, semi-sweet chocolate, nuts and malt. Lightly carbonated, mouthfeel is thin, a bit watery for my taste. I like the vanilla flavor, but this beer is just good, not great.

On tap at Lindley Park Filling Station here in Greensboro.Poured into a standard pint a deep dar brown with some ruby hue to it,a thinner but well sustained off white head atop.Big sweet vanilla aromas mixed with some roasted notes,flavors are quite sweet up front with vanilla and molasses flavors, there is a decent drying woddy,earthy finish to keep it from being sweeter than it already is.Not bad but the sweetness up front can be a bit much though.

A: Pours dark mahogany with a frothy cocoa brown head that settles to a light layer and leaves some spotty lacing.

O: I really hate to be harsh, but this barely resembles a porter to me. It's almost got a dark Belgian ale quality. Sure it's drinkable, but when I want a porter I'm looking for more roasty notes and less fruit.

Roasted walnut brown on the desktop, maroon with orange highlights when backlit. A golden ecru cap sits atop the beer and begins to deflate as surface bubbles pop! pop! pop! in rapid succession. Better than average lace helps turn this into a pretty good looking porter.

The nose is weak and isn't all that porterish. That's somewhat surprising since the malt bill runs the gamut from pale to caramel to chocolate to black to roasted barley. Precious little of the darker malts were used, I'm guessing. I do appreciate the unmistakable aroma of vanilla, so all is not lost.

Breckenridge went to the trouble to acquire vanilla beans from New Guinea and Madagascar. I guess a blending of the two is required to get exactly the vanilla flavor they're looking for. Why then does it taste like poor quality vanilla extract? Despite the fact that it has a great deal of flavor, I'm not enjoying the beer as much as I was during the first few sips.

It's a little too sweet, with a chocolate and caramal extract flavor. I'm sure the brewery uses quality ingredients, it just doesn't taste like it. Vanilla, which I usually love, is becoming more overpowering as I drink. Good thing the bottle is only twelve ounces.

The body/mouthfeel is both thin and slightly sticky, a combination of characteristics that has always made me think that sugar was added (after fermentation) to a relatively light-bodied beer. It's a fairly unexciting mouthfeel that might have been helped by a few more bubbles. Nah, probably not.

A vanilla porter sounds like something I would enjoy. It's too bad this winter seasonal isn't very good. I have no idea where the fault lies, but the beer tastes fake. Never mind the word 'partakable' along the bottom edge of the label. I won't be partaking of Vanilla Porter ever again.

Appearance: pours a decent tan head that falls fairly fast with some mild lacing. Color is a deep reddish brown.
Aroma: vanilla, chocolate, and roasted malts, with floral and herbal hops.
Mouthfeel: medium to heavy bodied with a creamy consistency.
Flavor: vanilla is quite dominate somewhat balanced with cocoa and dark roasted malt flavors. A background of bittering hops in the finish.
Overall: very good but not outstanding.

I love this beer. At my local pub where the choice is limited on porters this is always my go to.