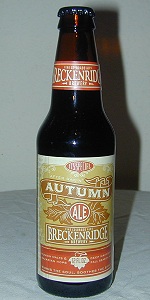 Notes: Our fall seasonal combines the malty goodness of a German lager with the clean crispness of an American ale. Brewed with Munich malts and a delicate blend of Bavarian hops, it's a full-bodied treat with a nutty-sweet middle, a warming alcohol level and notes of toasted grains. A pre-winter winner.

Pours a lovely rich, amber-brown color that appears ruby-tinted black in the glass with a finger-and-a-half of lasting tan head. You can just make out the strong effervescence, too, right where the head meets the body. Only upon drinking do you get some sloppy sheets of lacing.

Sweet, roasted malts dominate the nose with a hint of coffee, lighter hints of chocolate and berry, and a definite whiff of carbonation.

The chocolate and berry pop more in the taste. There’s almost like a chocolate-raspberry character cutting through the same roasted malt from the nose. There’s a bit of hop bite in there, and also a flash of brown sugar.

Medium bodied with strong carbonation that creates a prickliness to the feel.

This is a fine fall beer. Plenty of malt flavor with enough bitterness for balance and a heavier ABV than I realized while drinking it.

The beer pours a deep,amber color, and settles fast with minimal foam and lace. The aroma is a bit of smoky wood and malty hops. The beer settles with just the right amount of carbonation and leaves a nice aftertaste in the mouth. Breckenridge is surely becoming one of the best American breweries.

12oz Bottle from the IGA in Potsdam NY for 2$

Appearance - Dark brown colour with a tiny size fizzy beige coloured head. I can't make out the level of carbonation and there is some faint lacing. The head lasted for around 1 minute.

Taste & Mouth - There is a very low amount of carbonation and it seems almost flat. I can taste malts, caramel, and chocolate. There is also a bit of dark fruits. It ends with a chocolatey malt aftertaste.

Overall - Perhaps I had a bad bottle, but this beer was basically flat. The taste was fine but not something I expected from a fall seasonal. Not something I'd buy again.

Autumn Ale pours out a very dark brown with a beautiful clarity. The aroma is chocolatey and malty, with a touch of spicing. On the tongue, a full and wonderful roasty flavor quickly envelops the mouth. There's some bitter chocolate and a bit of fall spicing in here too. Full-flavored while not being overwhelming, it smoothly fades out a little while after the sip. The mouthfeel is on the light side of medium and fairly smooth, and the drinkability is great. Overall, this is an excellent beer that does a great job of balancing drinkability and flavor. I wish we had seasons here in Florida, because I'd love to kick back with this on a cool Autumn night on my deck back in New Jersey.

Appearance – The beer is served a deeper brown color with a one finger of just off white head. The head fades relatively quickly leaving a lighter level of foamy lace on the sides of the glass and a film of foam on the surface of the brew.

Smell – The aroma is rather strong of a chocolate and a caramel smell. Mixed with these aromas are some other light brown bready smells and some notes of brown sugar. Some nuttiness rounds out the aroma producing an overall sweet and roasty smelling brew.

Taste – The taste begins with a roasted brown bread taste mixed with a fair level of caramel sweetness. As the taste advances some flavors of cocoa and a little bit of nut comes to the tongue along with the arrival of a cola like flavor. Some lightly hopped flavors of a grassy and earthy nature come to the tongue more toward the end of the taste balancing out some of the sweet. In the end with the bitter coming to the tongue, a rather roasty and lightly hopped cola cocoa flavor is left to linger on the tongue.

Mouthfeel – The body of the beer is on the average to slightly lighter side for a darker harvest ale of its style with a carbonation level that is on the slightly higher side. A slightly thicker body and lower carbonation may have been a bit nicer for the roasted flavors of the brew as the somewhat watery nature of the brew really didn’t support the flavors well.

Overall – Not really the best harvest ales I have even had. The flavors never really complement each other well and the weaker body only further diminishes the impacts of the taste. Nothing too special here.

deep golden color with great head a ok lacing. Smells malty. Taste is sweet malt with a hint of caramel. Carbonation and mouthfell is decent and this beer overall is rather light. A good drinker for the summer especially !!!

Perhaps clean enough to come across as a lager, but the brewer’s intention was sort of a hybrid. Looks like fall, tastes like fall as well. Brewer’s snapshot of the season works here--perfect switch-up if you’re looking for a brew without spice, gourds or oompah.

This autumn ale from a 12 oz bottle pours a deep brown with ruby red highlights and a medium
off white head that dies to a thin pool leaving some decent lacing. The nose is a solid malt
backbone with caramel and light chocolate malts with a light hop in the background. Flavor
is slightly bitter with sweetness coming in on the sides and a light hop characteristic on the
back. A solid autumn ale that satisfies but does not over impress.

Autumn Ale from Breckenridge Brewery
Beer rating: 82 out of 100 with 628 ratings