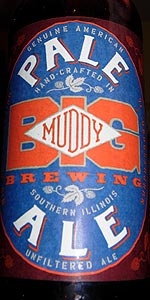 Notes: Generous additions of American Cascade hops give a hoppy spicy flavor. We balanced this just a hint of caramel malt sweetness. A delicious American Pale Ale full of fragrant and flavorful hops.

Poured this one into a Stone Imperial Pint glass. Makes a finger thick white head, and the body is copper colored with a mild haze.

He aroma is lemony, and has a slight toffee sweetness.

The taste is more caramel upfront, and then lemony hops intertwines itself to balance the malt.

Feels well carbonated, wetting to the palate and actually was a little tastier than I thought.

A: pale yellow in color, medium to high carbonation with a finger's worth of head

S: reminds me more of a pilsner than a pale but close enough I suppose. A bit of corn maybe, almost like a Miller Lite.

T: Better than a Miller Lite (not by much). A bit of caramel at the back, just not a lot of zing or pep.I would have definitely guessed that this was a pilsner rather than a pale ale.

M: decent carbonation, a little bit of stickiness, just nothing too exciting.

O: Not good. Tastes like something I made as a first attempt at homebrewing. #NotACompliment #SaveYourMoney

The last of the Big Muddy beers. Not a long ride, by any means, but an entertaining one. This finale pours a hazy amber-kissed straw topped by over a finger of harsh white foam. Tiny floaties swim idly by within. The nose comprises wheat, very light lemon peel, and a touch of puffed rice. The taste holds notes of lemon peel, dark greens, light plastic, musty wheat, and grass. This really doesn't taste very good at all. The body is a hefty-leaning light, with a light moderate carbonation and a sorta grainy feel. Overall, this is a pretty sad pale ale. Straight up.

Shared by Chris at our 4th of July get together. Apparently a $2.99 bottle, hard to turn down.

A - Golden colored beer, with a decent sized white head. No real stick left on the sides.

T - This is actually pretty bad. Watery, a little sweet, some citrus hops. It's a little bit grassy, but none of this is really working and not going together.

A: Pours a golden yellow that is semi-transparent. Fluffy white head that holds its own for quite a while. Impressive.

T: Seems a little bit watered down, which is surprising for its ABV%. I do taste some pale malts along with some grassy bitter hoppy ending.

Pours a brilliant golden yellow with a small white head which disappears quickly and smells subtle and straightforward with faint apricot, citrus and white flower notes. There's a touch of cereal grain in there too. Everything is mild on the palate. Weak malt and weak hops. It's balanced enough, but much like their Kincaid Wheat, lacks a lot of flavor.

Served from a 22oz bottle poured into a frosted pint glass.

Poured a golden yellow color with a small quarter inch head. There was little carbination but a fair amount of lacing. Although not as hoppy as an IPA, it tasted pretty close to a typicial IPA. This beer was suprisingly clear for an "unfiltered ale". The hops flavor appeared to increase as the glass and the beer warmed.

This brew was fairly light compared to my usual selections. The hops flavor seemed to linger in the mouth. Overall the beer was an average pale ale with no remarkabe qualities.

Tasted from a bomber poured into a .5 liter dimpled mug. This one did not have any dating on it whatsoever, inspected it multiple times. Would assume fairly fresh though as it just popped up in my local store, which I frequent quite a bit. It was not there a couple of weeks ago. Also, did not have even an ABV rating anywhere on it either. Odd.

Anyways, this one was drinkable, but not great. Like I said, no date anywhere on it, but under the circumstances I would believe it was pretty fresh. The problem is, it still tasted old and stale. Not the kind of old where it breaks down or the hops fade, the kind of old where it just tastes like old, dried up, stale hops. The malt backbone that accompanies it is not especially pleasant either. It has a funny off flavor I can't quite put my finger on. Kind of stale too I suppose, with a hint of funkiness.

It was also medium bodied at first, but as I drank it further and it warmed, it become more an more watery. It became quite thin, so much so it was like the beer had been mixed with water. Very odd.

Appearance: pours an orange color with a 1/2" head.

Smell: light caramel and fruit sweetness is all you can detect.

Overall: a mellow pale ale that is easy to drink. Definitely more fruity than bitter.

Where the hell is Murphysboro? And where did I even find this? Did it just magically appear in my fridge? Shit--it'd be remarkably easy to poison me. All it would take is an empty beer bottle and someone who was okay at graphic design. Just slap some random adjectives on there, along with the word "ale," and I will eventually drink whatever is in that bottle.

Pours pale and a little limp, but the mouthfeel doesn't betray any lack of carbonation. Smells fairly light but nicely balanced: caramely malt, a medium-strength hop profile that's a blend of citrus and flowers, and then a little bit of yeasty alcohol.

Tastes like it smells; like a nicely balanced, medium-strength old-school APA. The malt is a little grassy (maybe this is a wee bit old), and the back end has a lightly unpleasant earthy quality to it, but overall it's solid.

EDIT: as it warms, the yeast profile gets chewier and more complex and does a great job of blotting out the aforementioned earthen nodes. I'm upping the score accordingly.

(Served in a nonic)

A- This beer pours a clear golden yellow body with a swirling storm of microbubbles that support a thick head of white foam that last a good while and holds its shape pushing above the glass.

S- The green herbal hops have just a touch of field corn and some flinty mineral notes in the finish.

T- The pils malt is crisp with a touch of light crystal malt with a sweetness that cuts the carbonic acid in the finish. There is also a raw barley taste the leads to the pine herbal green snap in the finish that is pretty dry. There is a lingering bitter note that takes on a pungency as the beer opens.

M- The light mouthfeel has a fizzy scrubbing finish and no alcohol heat. It has a very crisp texture.

O- The nice crisp easy drinking pale ale has full bitterness to the hops with some nice floral notes that are a little soft. There is a good support by some malt flavors making this interesting and easy to drink.