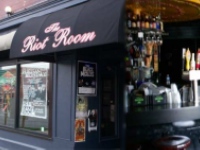 View: Place Reviews
Reviews: 4 | Log in to view all ratings and sort
Reviews by DDKennemore:

Over 40 beers on tap, more bottles than I care to count, and bartenders that know beer. This place used to be a yard beer drinkers heaven, now it carries every amazing craft beer they can get their hands on. Decent prices, and occasionally a fantastic band is playing. They also have Missouri beer night on Tuesdays, with specials of Schlafly and Boulevard beers. The owners are the biggest beer nerds I've ever met, it's great. If you're in KC, do yourself a favor and check it out, the cool beer nerds are here.

I’ve never seen something like this before. It’s 2 connected rooms. One is a house music dance floor. The other is a bar with crazy beer. We almost didn’t go in because house music, thumping bass, and flashing lights aren’t really my thing. My partner wanted to go because of their reputation, so we still went. I was pretty upset that they wanted $18 for cover for 2 people on a Sunday night at 11:50PM. The bouncer saw I was perfectly willing to walk away from that price and he agreed to let us in 2 for 1. I’m actually a little upset they even charged us cover at all because the "band" was over in 20 minutes and all we wanted was beer. The show was almost over when we got there. Anyways. I was pleasantly surprised with the music. The sound system is incredible! It was so well balanced I could hear the person next to me while sitting at the bar, but you could also hear the thumping from half a block away. The beer list was amazing. Unfortunately, nearly half (NOT exaggerating) of the taps were out of commission because "there was a beer festival the day before". Ok...that was yesterday. The fact that you can’t change a keg is, in my opinion, downright laziness. I’ll give you a little benefit of the doubt, but this was honestly the lowest percentage of working taps I’ve EVER seen. I did hear from many bartenders around the city, though, that this place is the first to get any very special kegs in the city. I would definitely go back, but during the day.

A well-kept secret in Kansas City. Amazing, amazing tap and bottle selection. Many taps you will not find anywhere in this city. These guys know beer, too, and will talk your ear off about it. No food at all I believe, and doesn't open until 5pm and closed on Sundays. Sometimes I want to get a quick beer on my day off or show someone this place on Saturday and forget its not open. Often there is a cover for the live band on the stage (often great though). But it can get very hot and loud. But, this means many of the hard to find taps will stick around for a while.